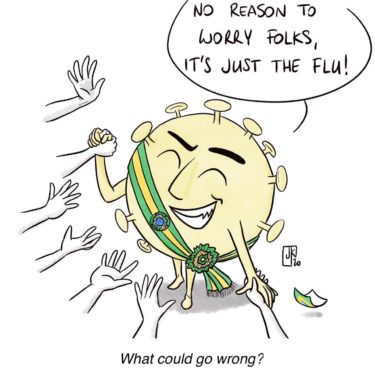 “I shook people’s hands because the people wanted me to,” said President Jair Bolsonaro, during an interview. Despite being possibly infected with the coronavirus, he had contact with at least 272 people on Sunday. Besides him, major political authorities tested positive for the novel coronavirus, including Senate President Davi Alcolumbre.

President Bolsonaro said the criticism towards his behavior—called an “attack on public health” by House Speaker Rodrigo Maia—is just a power move by his detractors. Jair Bolsonaro has downplayed the coronavirus pandemic, calling it a “media fantasy.”

Flanked by a number of his cabinet ministers, all wearing protective masks, President Bolsonaro gave a press conference yesterday afternoon on measures to combat the Covid-19 outbreak. The president claimed that he “will never abandon the Brazilian people”—once again, making the same mistakes.

Amid the crisis, Congressman Alexandre Frota tweeted that an impeachment request against the president is “ready to be filed.” Formerly an ally, the former adult film actor turned politician is asking for Mr. Bolsonaro to be ousted for inciting protests against Congress and the Supreme Court. The Socialism and Freedom Party (PSOL) has already filed its own impeachment request.

There’s also a problem President Bolsonaro is creating with Health Minister Luiz Henrique Mandetta, who is reportedly growing disgruntled with the president. According to newspaper Estadão, the minister sees his efforts to raise awareness of Covid-19 undermined by Mr. Bolsonaro’s denialism.

Last but not least, the official Twitter account of the Chinese Embassy in Brazil called out Congressman Eduardo Bolsonaro after he blamed China’s Communist Party for the coronavirus outbreak, calling his words “irresponsible,” suggesting he mimics US President Donald Trump.

We should ask: who is the virus here?

The latest news on the coronavirus outbreak in Brazil in real-time.

The coronavirus risks within Brazil’s presidency

Should Brazil give a universal basic wage in response to Covid-19?

The latest news on the coronavirus outbreak in Brazil in real-time.