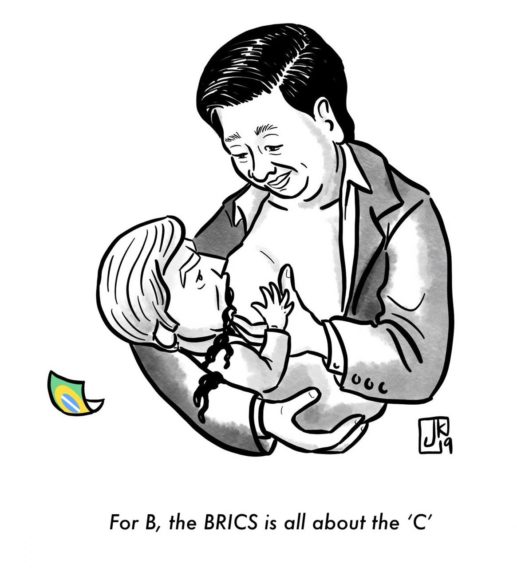 Brasilia is closer to Beijing than it appears 🇨🇳 🇧🇷 Over the past ten years, China has become Brazil’s main trading partner, accounting for almost 28 percent of all Brazilian exports between January and October this year. Currently, Brazil enjoys

a trade surplus of USD 21.5 billion with the Asian giant, mainly propelled by commodities such as soy, crude oil, and iron ore.</p> <p>So, as we have written at The Brazilian Report, dealing with China is a necessity, not a choice. During the BRICS summit in Brasilia this week, President Jair Bolsonaro seemed to bury the last drop of his ideological disagreements with the Chinese. Instead of using anti-communist arguments—recurring during the 2018 presidential campaign—he said: “China is an increasingly larger part of Brazil’s future.” Even a free trade deal could emerge.</p> <p>Brazil needs China. In the largest-ever auction of pre-salt oil fields, which was a colossal flop for the Brazilian markets, state-owned oil company Petrobras did most of the bidding, while other major international oil companies stayed away. Petrobras joined up with China’s CNOOC and CNPC in presenting the sole bid for the giant Buzios pre-salt oil field.</p> <p>While China&#8217;s “poor” growth will hit 6 percent in 2019, Brazil’s &#8220;positive&#8221; GDP leap doesn&#8217;t even reach 1 percent. In terms of the Brazilian market, China is everywhere. And there’s only one missed step on Mr. Bolsonaro’s quote: China is not just part of Brazil’s future, but also past and present.