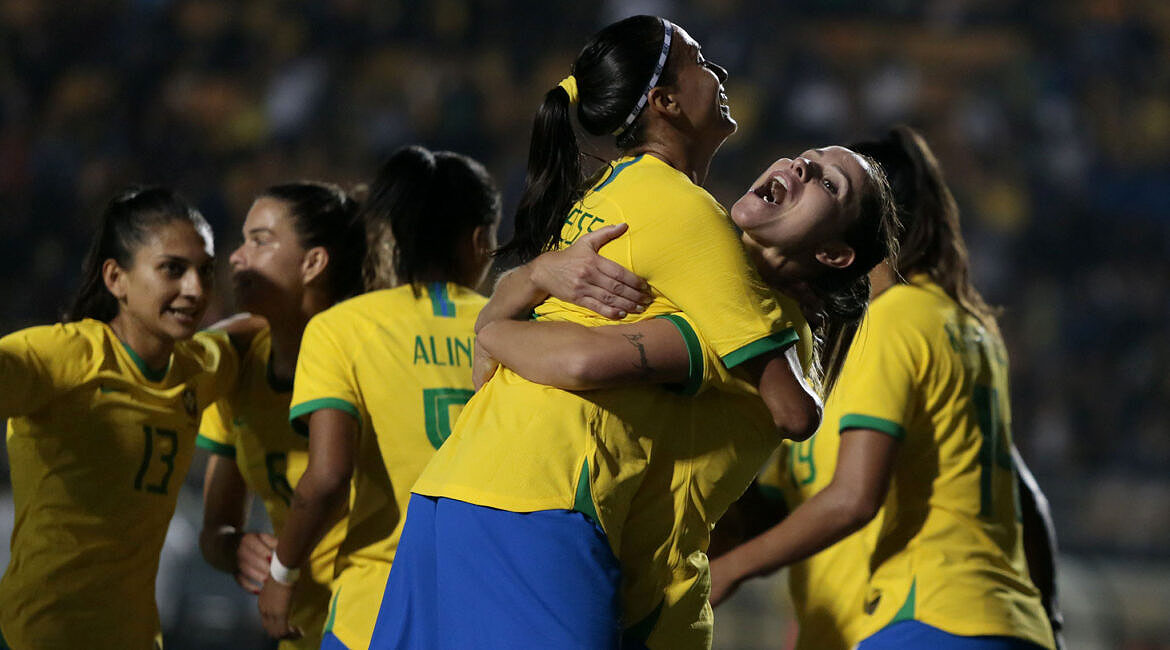 Welcome back to the Brazil Sports newsletter. This week, we look back at a potentially game-changing year for women’s football in Brazil. Also, with Jair Bolsonaro going to watch Santos, we tell the story of a 1920s football star who defied the Brazilian president of the time. That, and much more. Happy reading! 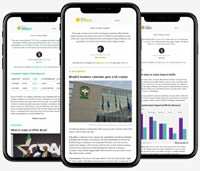 Corinthians dispatched São Paulo 3-0 to seal their first-ever state championship trophy in the women’s game. Not so long after their Copa Libertadores triumph made them the top women’s team on the continent, Corinthians guaranteed local bragging rights as a fitting way to end their season.

Why it matters. The crowd of 28,862 people in the Arena Corinthians was a Brazilian record for women’s football, and it could have been even more. Some 36,000 tickets were snapped up in advance, but there were reports that many were being sold at exorbitant prices by touts outside the stadium.

Emotion. The entire experience was overwhelming for São Paulo full-back Jajá, who burst into tears before kick-off. “Regardless of being São Paulo, or Corinthians, today I can say that women’s football fills stadiums. It was beautiful, wonderful, overwhelming to see the Corinthians support backing women’s football. It all came together in my head and I couldn’t hold back [the tears].”

Pay gap. Beyond the game itself, the São Paulo football federation (FPF) promoted an initiative highlighting a recent IBGE study concluding that women in Brazil earn 20 percent less than men on average. When Corinthians scored the opening goal, the FPF’s official feed flashed up “Corinthians 0.8 – 0 São Paulo” on the scoreboard.

World Cup fever. Scenes in São Paulo at the weekend have capped off a crucial year for women’s football in Brazil. A brave performance in the Women’s World Cup was made even more special by the significant audience drawn to the games on television and the excitement around the country—comparable to the interest in the men’s Copa América, which took place at the same time.

Pia Sundhage. The new age of Brazilian women’s football could well be led by the national team’s Swedish coach Pia Sundhage. Since taking over after the World Cup, performances under Sundhage haven’t quite been the best, but the mood among the squad is sky-high. Next year, all eyes are on the Tokyo Olympics.

On Saturday, Brazil’s far-right President Jair Bolsonaro stirred up some controversy by announcing he would attend the derby match between Santos and São Paulo, watching it in one of the home side’s executive boxes. While there is nothing particularly novel about a country’s president attending sporting events, Mr. Bolsonaro’s connection to football has often rubbed fans up the wrong way.

Why it matters. Traditionally “presenting himself” as a fan of reigning league champions Palmeiras, Jair Bolsonaro has been shown to be somewhat promiscuous when it comes to supporting football clubs. He has been pictured kissing the badge of nearly every Brazilian side one can think of, and many football fans are tired of it. On Saturday, he was greeted to a mixed reaction, posing for plenty of photos in his Santos jersey but also being on the receiving ends of boos and whistles.

Feitiço. For historians of Brazilian football, the events at Santos were reminiscent of another case, back in the 1920s, involving the Executive government and Santos’ star striker, Luís “Feitiço” Matoso. Long before Pelé, Feitiço helped transform Santos—a modest club from São Paulo’s coast—into a team recognized worldwide as being synonymous with world football.

Alongside their famous attacking line of Osmar, Camarão, Araken, and Evangelista, Santos made history in Feitiço’s first season, scoring 100 goals in the 16-match 1927 São Paulo state championship—an average of 6.25 goals a game. Until today, that Santos side is immortalized in the club’s anthem, referred to as the “Champions of Technique and Discipline.”

Angering the president. Later that same year, Feitiço and several of his Santos team-mates were picked to play in a friendly between select teams from Rio and São Paulo at Vasco da Gama’s São Januário stadium. Brazil’s president, Washington Luís, was in attendance. After conceding a contentious penalty kick, Feitiço’s São Paulo XI threatened to abandon the game unless the referee overturned the decision. President Luís, not much of a football fan, demanded the match continue. When his order reached the players on the pitch, Feitiço replied in defiance. “You can tell the president that he is in charge up there in the stands, but I’m the guy in control down here.”

Feitiço was handed a three-year ban from international football, but never served his punishment. The following year, he scored four goals for Brazil in a friendly against visiting Scottish club Motherwell. This story was adapted from A to Zico: an alphabet of Brazilian Football, written by Mauricio Savarese and myself.

Goal of the week

Eight goals, plenty of turnarounds, tension, rivalries, and a Maracanã stadium packed to the rafters. Flamengo 4-4 Vasco was easily the greatest game in Brazil this year. The home side’s third goal, to bring them back level for the second time, was a stunning piece of improvised skill from Bruno Henrique, the man who must win this season’s player of the year award. Beginning the move himself, he breaks free from the defense and charges goalward, playing a one-two with his Uruguayan team-mate Giorgian De Arrascaeta. As the ball returns to him, Bruno scoops it up slightly with his right foot and volleys it over the goalkeeper and into the net; a very aesthetically pleasing finish, and not an easy one to carry out.

Série A. Flamengo’s impending title win has just gotten that little bit nearer. Despite the hard-fought 4-4 draw with rivals Vasco mentioned above, the leaders managed a 1-0 win on Sunday while resting many of their first-team players, and saw second-placed Palmeiras drop yet another two points. The gap is now 13 points, and Palmeiras only have five games left. If they slip up again, it’s game over.

Libertadores. Why, you ask, would Flamengo choose to rest their first-team, despite being on the verge of winning the league title? Well, their ultimate objective this year lies elsewhere, in the Copa Libertadores final against River Plate on Saturday. Confidence is sky-high with the side dominating all opposition in Brazil, but it’s worth noting that Flamengo have won only one of their four matches against foreign sides in this year’s Libertadores. River Plate, managed by the superb Marcelo Gallardo, will be Flamengo’s biggest test yet.

Under 17s 1. Against the odds, Brazil came from behind against Mexico to win the Under 17s World Cup on Sunday night. After another incredible turnaround in the semi-final, beating France 3-2, Guilherme Dalla Déa’s side came back from 1-0 down to win the cup in injury time, thanks to a goal from Flamengo forward Lázaro—also the hero against France. This is Brazil’s fourth Under 17 World Cup title, and their first-ever win against Mexico in a football final.

Under 17s 2. While the tournament has become one of the biggest events on the calendar of scouts of major European sides, Brazil’s record of bringing players through from the under 17 level is not great. A survey from Globoesporte showed that of Brazil’s three previous world champion under-17 squads, only eight players went on to play for the full national team, with only two—Ronaldinho Gaúcho and Adriano—appearing for Brazil at the World Cup. There were some particular standouts at this year’s tournament—particularly Palmeiras’ playmaker Gabriel Veron—but where they will go from here is anyone’s guess.

Brazilian GP. The Formula 1 rocked up in São Paulo at the weekend for the 2019 Brazilian Grand Prix. A crash between Ferrari teammates and race favorites Charles Leclerc and Sebastian Vettel helped Red Bull’s Max Verstappen—who started in pole position—win Sunday’s race in Interlagos. For Brazil, however, the most important event of the Grand Prix was a meeting between São Paulo Governor João Doria and Formula 1 executives to extend the city’s GP contract for another ten years, as it expires at the end of next year. President Jair Bolsonaro sparked a row with Mr. Doria, claiming the race should be moved to Rio de Janeiro.

UFC São Paulo. A mixed evening for Brazilian fighters in the ESPN+ event in São Paulo. Ronaldo Jacaré lost out to Jan Blachowicz in the main event, and Maurício “Shogun” Rua’s bout with Paul Craig ended in an anti-climactic draw. Elsewhere, however, there was an impressive knockout win from Charles Do Bronx and fan’s favorite Fabricio Massaranduba came through his fight via a unanimous decision.