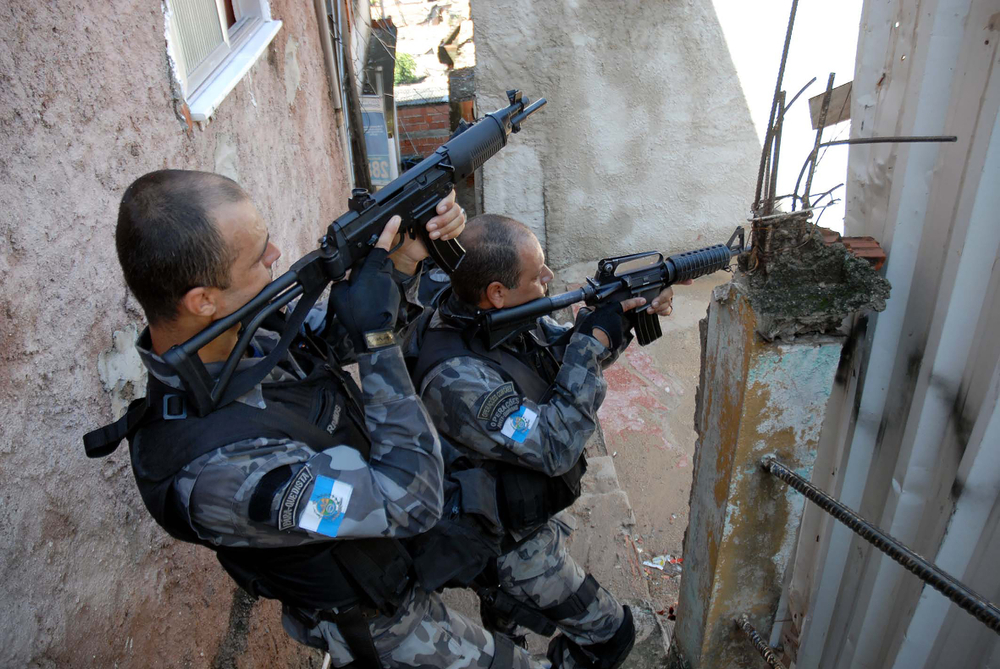 The suicide rate among officers of Brazil’s civil and military police forces increased a worrying 42.5 percent last year, with the rise even sharper (53.8 percent) among only military police agents.

</p> <p>Just two states (Amazonas and Rio de Janeiro) saw decreases in the number of police suicides between 2017–2018, with the rest increasing or remaining unchanged. Levels doubled in Bahia, Pernambuco, and Rio Grande do Sul; tripled in Maranhão, and quadrupled in the Federal District.</p> <div class="flourish-embed" data-src="visualisation/664489"></div><script src="https://public.flourish.studio/resources/embed.js"></script> <p>In the northeastern state of Alagoas, no police suicides were recorded in 2017; last year, there were six.</p> <p>Meanwhile, the number of police officers killed on duty also saw an increase, albeit a much slimmer rise of 7.4 percent in 2018. In all, there were 19.5 percent more cases of public security agents committing suicide than there were officers killed in the field.</p> <p>This goes against the platforms of several conservative politicians in Brazil, including President Jair Bolsonaro, who have pushed discourse about safeguarding the lives of police officers on duty and toughening their response to crime, overlooking any mental health issues that may come as a consequence.</p> <h2>Suicide problem bigger than it looks</h2> <p>While suicide figures have shown significant increases between 2017 and 2018, the actual number of cases is considerably higher, according to Elisandro Lotin, president of the Brazilian Public Security Forum council.&nbsp;</p> <p>&#8220;Several states don&#8217;t have this data, and those which do often make access to them harder,&#8221; he told <strong>The Brazilian Report. </strong>&#8220;This number [of police suicides] is highly underestimated. The real figure is much higher.&#8221;</p> <p>Elisandro Lotin, who is an active sergeant of the military police himself, believes the problem has been created by the institution itself. &#8220;Within public security, there is an aura that police officers are heroes, that they are immune to mental health issues,&#8221; he explains. &#8220;As a result, [authorities] omit themselves from helping the day-to-day lives of police officers, increasing their salaries, improving their working conditions, or creating public policies to mitigate the problem.&#8221;</p> <p>The problem is not exclusive to Brazil, with <a href="https://www.bbc.com/news/world-us-canada-49503972">the U.S. and France</a> also presenting worrying suicide rates among police officers. Notably, public security agents are armed in all three aforementioned countries, with rates in the U.K.—where police officers are overwhelmingly unarmed—significantly lower.</p> <h2>Bolsonaro to blame?</h2> <p>Since the 2018 election campaign, Jair Bolsonaro and his contemporaries—particularly Rio de Janeiro governor Wilson Witzel—have promoted a platform of lionizing police officers, furthering the narrative that they are at war against crime, a stance supported by a significant portion of the population.</p> <p>&#8220;This discourse is good for the ego [of police officers],&#8221; says Sgt. Lotin. &#8220;It maximizes the hero complex: the officer goes into combat, puts him/herself into situations which inevitably cause psychological stress, but they cannot address their mental health because they are meant to be heroes.&#8221;</p> <p>However, the problem of dehumanizing public security agents is not a new phenomenon in Brazil, and Sgt. Lotin stresses that the debate surrounding these issues cannot be turned into an ideological dispute. &#8220;The police officer who kills, or kills himself, is not left-wing or right-wing, he is a human being.&#8221;</p> <h2>Yellow September</h2> <p>These worrying suicide trends have come to light in conjunction with Yellow September, a suicide awareness and prevention campaign held every year in Brazil. Speaking to <strong>The Brazilian Report</strong>, psychologist Marília B. Mendes underlined the importance of the month-long campaign. &#8220;Studies have shown that depression will become the most incapacitating illness as of 2020, making it urgently necessary for us to talk about mental health, self-care, suffering, and other issues which are important to us,&#8221; she explained.</p> <p>With regards to mental illness as a result of work, Ms. Mendes highlights &#8220;high levels of stress, responsibility, anxiety and situations of tension&#8221; as potential aggravating factors affecting psychological well being, all of which could realistically be applied to Brazilian police officers.</p> <p>According to Ms. Mendes, &#8220;the understanding that there are possibilities to care for individuals affected by suicide&#8221; make Yellow September an initiative of utmost importance.</p> <h2>Suicide rates increasing nationwide</h2> <p>The 2019 Public Security Annual highlights a nationwide trend of increasing suicide rates, not just among police officers. Suicides increased 4.2 percent nationwide, with shocking rises in some Northeast and North states. In the state of Sergipe alone, the suicide rate increased 73.7 percent.</p> <p>According to the study, the southern state of Santa Catarina remains the place in Brazil with the highest rate of suicides per 100,000 people, with 11.5 cases, rising 4.2 percent last year in line with the national average.

Rhetoric trumps policy as Rio police kills more than ever