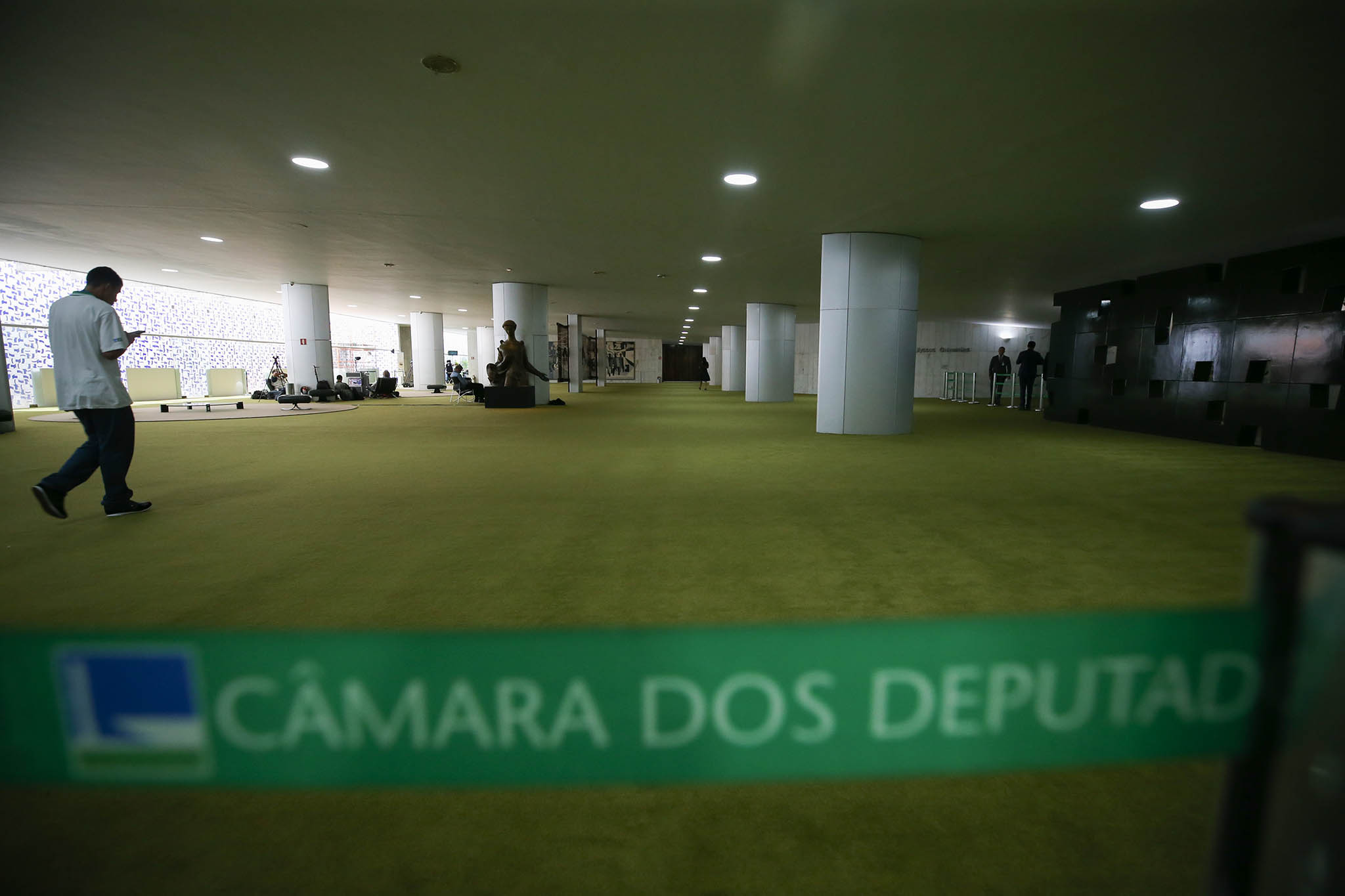 As Covid-19 spreads across Brazil, authorities are still struggling to find a way to deal with the virus. As of Monday afternoon, Brazil has confirmed 234 infections, with another 2,000-plus suspected cases—and the Health Ministry is foreseeing a “harsh 20 weeks ahead.” The response around the country has been quite erratic, with many—but not all—states forbidding crowds in places such as cinemas or gyms, and limiting access to public buildings.

where many of the lawmakers and staff fall into risk groups on account of age, the outbreak has essentially caused an early holiday. Heading into this week, access to the grounds of the House of Representatives and Senate was restricted to accredited employees, members of the press, and people who were summoned to hearings committees <em>before</em> the declaration of the Covid-19 pandemic.&nbsp;</p> <p>Metal surfaces throughout the buildings—including sink faucets—are being cleaned regularly with alcohol gel, while congressional sessions are almost completely empty. Civil servants are already working remotely and taking turns to complete office hours. And, as many congressmen are over 60, the fear of being infected by the virus is tremendous, with the concern already reaching the leaders of both houses.</p> <h2>Congress during the Covid-19 pandemic</h2> <p>An audio message sent by House Speaker Rodrigo Maia to fellow members of Congress, leaked on Monday, summarizes the plans for the legislative branch during the pandemic:</p> <blockquote class="wp-block-quote"><p><em>&#8220;Of course, we will not have sessions with 300 representatives in the chamber. We will only go if there is an agreement to vote on bills related to Covid-19. But Congress does not work, at this moment, when it is part of the solution, it can scare the population even more. Of course, it is not for everyone to stay in the chamber, you can stay in your apartment, in your hotel or in your office. I think whoever can be in Brasilia stays to helps build agreements.&#8221;</em></p></blockquote> <p>The government issued a decree to Congress providing for the <a href="https://brazilian.report/tourism/2020/03/16/brazil-intervenes-in-the-credit-market-tourism-airlines-events/">release of BRL 5 billion to fight Covid-19</a>. According to Mr. Maia, the decree should be easy to approved, as one would be &#8220;hard-pressed to find someone who is against it&#8221; and the agreements for voting on the bill may be negotiated &#8220;remotely, by WhatsApp, or by phone.&#8221;</p> <p>But this de facto recess of Congress may have political effects as dangerous as the negligence President Jair Bolsonaro has shown toward Covid-19. There are many other decrees awaiting approval by Congress which will expire if not voted on in time. One such decree concerns the legalization of land tenure, establishing new criteria for the recognition of possession of properties owned by the federal government, including those that house settlements.</p> <p>If the decree expires, many people may continue to live illegally and will need to wait for an ordinary bill to be approved, which is a much longer process.</p> <h2>Congress v. Bolsonaro</h2> <p>Before the Covid-19 pandemic was decreed, supporters of the president were already organizing a national protest against what they called &#8220;blackmailing&#8221; by Congress and the Supreme Court. The demonstrations that took place on Sunday initially received direct support from the president, who his most loyal voters see as being the victim of anti-republican shenanigans by the legislature.</p> <p>However, once Covid-19 was declared a pandemic, Jair Bolsonaro backtracked and advised against the protests taking place, in order to avoid mass contagion. But the demonstrations took place anyway, albeit in small numbers. Jair Bolsonaro, sitting at home in self-isolation, couldn&#8217;t help but share videos of the protests on his social media profiles and then leave his residence to greet the demonstrators, breaking all Health Ministry protocols and shaking hands with over 200 members of the public.</p> <p>The novel coronavirus appears to be following Mr. Bolsonaro around where he goes. Fourteen members of the delegation that accompanied the president on an official visit to the U.S. have now tested positive for the disease, including his lawyer Karina Kufa, Press Secretary Fábio Wajngarten, and Senator Nelsinho Trad.</p> <p>The president&#8217;s attitude is being widely criticized, including by some that supported his election in 2018. One example is São Paulo state lawmaker Janaina Paschoal, who campaigned for Mr. Bolsonaro and even came close to standing as his vice-president. In a <a href="https://twitter.com/joaoabel_/status/1239625125953261568">fiery speech</a>, Ms. Paschoal asked for Jair Bolsonaro to be removed, admitting that she regretted having supported and voted for the current president.&nbsp;</p> <p>&#8220;This is a crime against public health [&#8230;] It would be better to put [Vice President] Mourão [in charge], he knows about defense,&#8221; she said. Another former supporter—but who has long since cut ties with Mr. Bolsonaro— lawmaker Alexandre Frota, <a href="https://twitter.com/alefrota77/status/1239534556556021760">said he will file an impeachment request </a>against Bolsonaro on Tuesday.</p> <p>The leader of the center-right Democratas party—a major player in the so-called &#8220;Big Center&#8221; of parties that hold a majority in Congress—said that Jair Bolsonaro was inconsequential in exposing the public and himself to the risk of transmitting or contracting Covid-19.

Is Brazil’s healthcare system prepared for the Covid-19 pandemic?