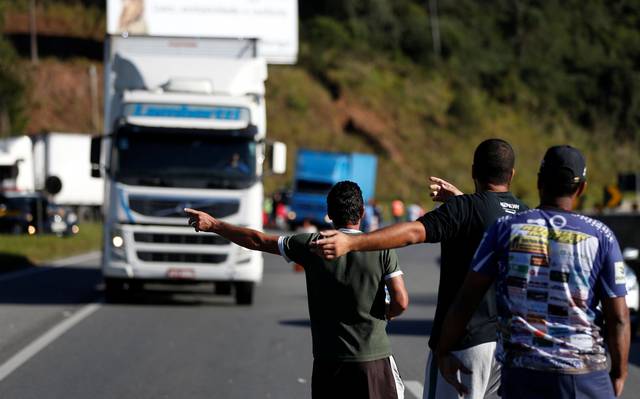 The truckers’ strike began on May 21.

The truckers’ strike began on May 21.

The Brazilian truckers’ strike, now entering its ninth day, has stopped the country. The movement’s core demands – related to diesel prices, toll fares, and a minimum price for freights – have now been met by the federal administration, resulting in nearly all union leaders publicly calling for the end of the strike.

Yet there remain over 500 roadblocks across the country. Truckers are still preventing the free flow of people and supplies, leading to crippling food and fuel shortages. Even in huge urban centers like São Paulo, the streets are empty – even during rush hour.

</p> <p>The truckers who continue to block the roadways have adopted a more radical agenda, one that extends beyond the original demands for better working conditions and pay. These new demands range from a reduction in fuel prices, including ethanol and gasoline, to military intervention and the general overthrowing of the Brazilian government.</p> <p>Needless to say, these demands are impossible to meet.</p> <p>The radical truckers’ atomized mobilization has been facilitated by <a href="https://brazilian.report/2018/04/13/whatsapp-fake-news-elections/">WhatsApp Messenger</a>, resembling Brazil’s June 2013 protests (the main difference being that back then, Facebook and Twitter were the social networks of choice). And because the rapid exchange of information taking place on social media is further galvanizing protestors, union leaders are finding it difficult to get the truckers back to work.</p> <p>But is this just a spontaneous protest against Brazil’s current political situation? As is typically the case with social demonstrations, its reality is far more complex.</p> <p>Calls for a military coup have <a href="http://www.bbc.com/portuguese/brasil-44248222">existed</a> since at least June 2013, a movement originally ignited by the left but seized by the right. These calls gain traction due to the general public disgust for the political classes and establishment parties, such as Michel Temer’s MDB, Lula’s Workers’ Party, and Geraldo Alckmin’s PSDB.</p> <p>Public dissatisfaction has been exploited by the neo-fascist presidential hopeful Jair Bolsonaro, whose mere candidacy was unimaginable only a few years ago. Some polls show Bolsonaro taking 20 percent of votes. Furthermore, according to a recent poll sponsored by XP, an investment bank, he is already ahead of all competitors in any hypothetical runoff stage contest.</p> <hr /> <p><img class="alignnone size-large wp-image-4602" src="https://brazilian.report/wp-content/uploads/2018/05/export-eYn2w-1024x342.png" alt="lula bolsonaro poll 2nd round 2018 election" width="1024" height="342" srcset="https://brazilian.report/wp-content/uploads/2018/05/export-eYn2w-1024x342.png 1024w, https://brazilian.report/wp-content/uploads/2018/05/export-eYn2w-300x100.png 300w, https://brazilian.report/wp-content/uploads/2018/05/export-eYn2w-768x256.png 768w, https://brazilian.report/wp-content/uploads/2018/05/export-eYn2w-610x204.png 610w, https://brazilian.report/wp-content/uploads/2018/05/export-eYn2w.png 1180w" sizes="(max-width: 1024px) 100vw, 1024px" /></p> <hr /> <p>Many high-profile Bolsonaro supporters are also backing the truckers’ strike, including the extreme-right candidate himself. Bolsonaro has openly backed the protests and voiced his intention to revoke any punishment they might endure, should he be elected president.</p> <p>At first, Bolsonaro’s voters consisted mostly of low-ranked Army officers, policemen, and young, middle-class social media users. Now, he might be drawing support from labor leaders. Moreover, he is benefiting from Brazil’s current wave of despair and social chaos. As with any neo-fascist politician, Bolsonaro relishes chaos. His simplistic solutions to complex problems give some direction to citizens fed up with the traditional political landscape and its associated corruption.</p> <p>Curiously, though not surprisingly, Bolsonaro’s past stands in direct contradiction to his present. Years ago, he said that demonstrators who block roads should go to prison. Now, he supports them. Bolsonaro also recently claimed he supports the libertarian agenda – and yet now defends price-controlling policies and the interests of his new voter base.</p> <p>In all fairness, sincerity is not a ‘must-have’ quality in this year’s presidential race. The anger uniting voters and truckers is overpowering other voices. Now, the question is whether financial markets will flip out over Bolsonaro as Brazil’s head of state.

Is Brazil heading for another truckers’ strike?

Pollution decrease: the bright side of the truckers’ strike

The government’s strategy to avoid another truckers’ strike