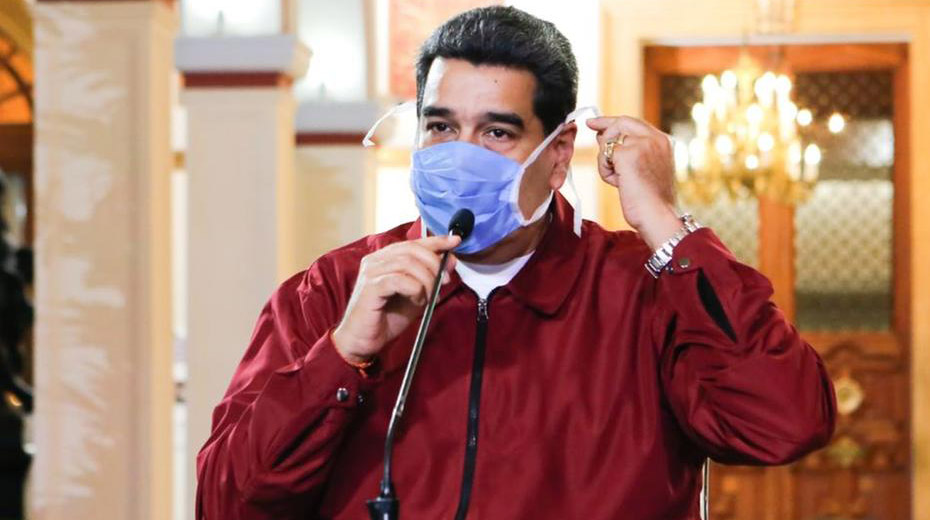 Over the past few years, Venezuela has been battered by a full-scale socioeconomic collapse. Marred by political instability, an authoritarian government, and a currency meltdown, the country was already facing shortages of food, fuels, and basic goods. In Venezuelan hospitals, medicine and equipment were scarce — and the country had only 73 critical care beds to over 28 million people.

And that was before the coronavirus threat came to the Americas.

the U.S. government has officially accused President Nicolás Maduro of narcoterrorism, money laundering, and drug trafficking, <a href="https://www.washingtonpost.com/world/the_americas/the-united-states-indicts-venezuelas-maduro-on-narco-terrorism-charges/2020/03/26/a5a64122-6f68-11ea-a156-0048b62cdb51_story.html">placing a USD 15-million bounty for information</a> leading to his capture and conviction. U.S. Attorney General William Barr said Mr. Maduro and former government officials have worked with Colombian guerillas, turning Venezuela into a hub for drug shipments to the U.S.</p> <p>“We’re going to explore all options for getting custody,” Mr. Barr told reporters. “Hopefully, the Venezuelan people will see what’s going on and will eventually regain control of their country.” These words echo the 1988 indictment of former Panamanian ruler Manuel Noriega&nbsp;—&nbsp;which led to his capture the following year during a U.S. invasion.</p> <p>But Mr. Maduro relies on a much better-equipped army, as well as sympathy from Russia and China, making any such move a longshot for the U.S. at the present time.</p> <p>Since Donald Trump entered the White House in 2017, the U.S. has adopted a <a href="https://brazilian.report/opinion/2019/02/26/trump-threats-venezuela-latin-america/">much harsher stance against Venezuela</a>, extending sanctions on the South American nation. According to a <a href="https://fas.org/sgp/crs/row/IF10715.pdf">U.S. Congress report</a> from January 22, 2020, the Treasury Department sanctioned at least 144 Venezuelan or Venezuela-connected individuals, and the State Department has revoked the visas of hundreds of individuals and their families. The Trump administration also has imposed sanctions on Venezuela’s state oil company (Petróleos de Venezuela, S.A., or PDVSA), government, and central bank.</p> <p>And yet, Mr. Trump has <a href="https://brazilian.report/power/2019/01/18/venezuela-intervention-brazil/">failed to topple Mr. Maduro</a>.</p> <p>Besides the U.S., almost every Latin American nation has turned on Mr. Maduro, recognizing self-proclaimed opposition leader Juan Guaidó as the legitimate leader instead. His support comes from Russia, China, Iran, Turkey, and South Africa — as well as other smaller nations.</p> <p>This question of legitimacy was precisely the reason why the International Monetary Fund refused a USD 5-billion loan request from Mr. Maduro. According to the fund, Mr. Maduro&#8217;s recognition as a leader is “not clear” in the eyes of the international community — which is paramount for the multilateral organization.</p> <div class="flourish-embed flourish-map" data-src="visualisation/680189"><script src="https://public.flourish.studio/resources/embed.js"></script></div> <h2>Covid-19 and Venezuela</h2> <p>At the time of publishing, Venezuela has fewer than 100 confirmed Covid-19 infections and no deaths, though it is hard to find the numbers credible. As with any authoritarian state, Venezuela is not transparent with the disclosure of data that can be detrimental to the government. Plus, Mr. Maduro&#8217;s first reaction to the outbreak was calling the coronavirus a product of &#8220;biological warfare&#8221; against China.</p> <p>On March 16, however, he imposed a quarantine for all Venezuelans.&nbsp;</p> <p>According to the Venezuelan Medical Federation (FMV), there are only 73 intensive care beds currently available for the 28-million population. In the country where morgues are overflowing with corpses due to supply shortages, at least 164 people died in 2019 because of power cuts in medical centers, and 70 percent are in need of weekly water supply, said the National Hospital Survey.</p> <div class="flourish-embed flourish-chart" data-src="visualisation/1667068"><script src="https://public.flourish.studio/resources/embed.js"></script></div> <p>The Global Health Security Index states Venezuela&#8217;s health system is among the worst in the world in its capacity to respond and fight the Covid-19 pandemic. In the meantime, Mr. Maduro and his closest allies blame everything on U.S. sanctions. In response, American authorities say those penalties don’t prevent the purchase of medical aid.</p> <p>The question that most experts and Venezuelan ask is: is this it for Maduro?&nbsp;</p> <p>Well, <strong>The Brazilian Report</strong> <a href="https://brazilian.report/latin-america/2020/01/08/venezuela-back-spotlight-after-physical-struggle-congress/">explained</a> that after Juan Guaidó’s failure in 2019, Venezuela came back to the spotlight after a physical struggle for Congress in the early days of 2020. <a href="https://brazilian.report/latin-america/2020/03/19/venezuela-remains-bolsonaro-straw-man-covid-19-crisis/">Under pressure</a> for several years, even facing a possible <a href="https://www.nytimes.com/2019/08/13/world/americas/venezuela-military-maduro.html">coup inside his own military allies</a>, Mr. Maduro has stood his ground.&nbsp;</p> <p>The only thing we know for sure right now is that Venezuela is not even close to being prepared for the Covid-19 pandemic, with or without Nicolás Maduro.

Why Brazilian trade with Venezuela has hit a 20-year low