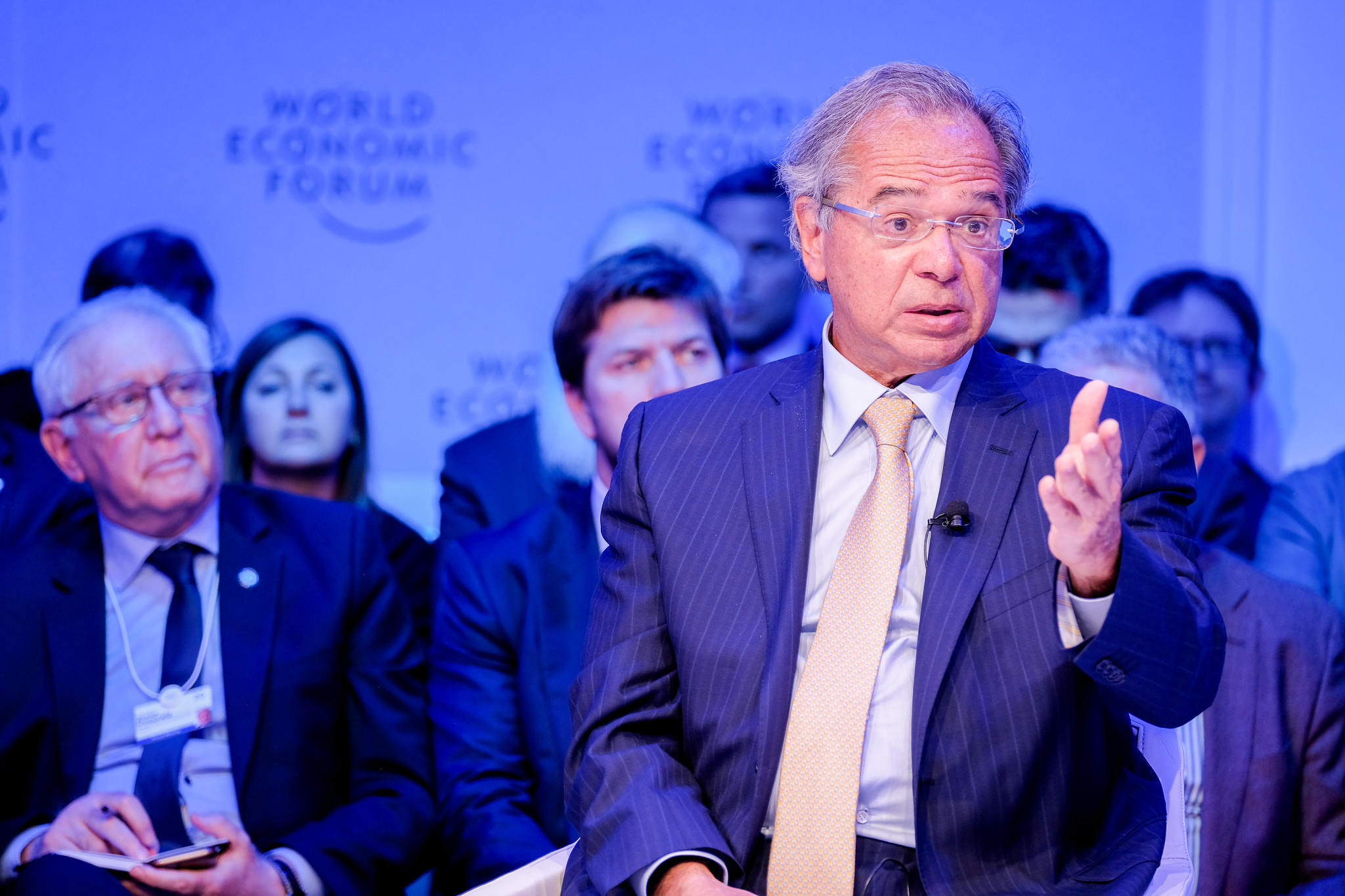 One year after flopping at the World Economic Forum in Davos, Switzerland, President Jair Bolsonaro decided to skip the 2020 edition of the notorious gathering of big business, political leaders, and key members of academia. Without Mr. Bolsonaro in attendance, Economy Minister Paulo Guedes is Brazil’s most-senior official at the event, being entrusted with the mission of selling an image of environmental respect, institutional normalcy, and readiness for investments.

Speaking at a panel about the government’s efforts to prevent Amazon deforestation—or lack thereof—Mr. Guedes said “poverty” is the environment’s worst enemy.

</p> <p>&#8220;People destroy the environment because they need to eat. [Poor people] have all the concerns that are no longer the concerns of those who have already destroyed their forests, who have already fought their ethnic minorities, those things … It is a very complex problem, there is no simple solution.&#8221;</p> <p>We at <strong>The Brazilian Report</strong> went ahead to fact-check Mr. Guedes&#8217; information, looking at the database of fines of Brazil&#8217;s environmental protection agency Ibama. We examined the top 10 transgressors since 2010, and the data suggests people are burning down the forest for much more than just survival. The list includes one former mayor and a rice tycoon—not exactly the poor folks Mr. Guedes was talking about.</p> <p>(Of the top 20 perpetrators of environmental crimes, only two were companies.)</p> <h4>1. Fernando Ferreira de Souza (Novo Progresso, Pará): BRL 3.7 million in fines</h4> <p>Charged with burning 3,767 hectares of forest without proper authorization. One hectare is roughly the size of a football field.</p> <h4>2. Gildemar Rogerio de Souza (São Félix do Xingu, Pará): BRL 2.5 million in fines</h4> <p>Caught by authorities illegally burning 1,295 hectares of forest. In 2003, environmental inspectors found guns and chainsaws on his property. One hectare is roughly the size of a football field. He is also a breeder of Zebu cattle. According to <a href="http://www.radaroficial.com.br/d/6022915006922752">public record</a>, he owns a farm named Vale do Xingu and a construction company G3 Empreiteira.&nbsp;</p> <h4>3. Antonio Belem de Macedo (Amajari, Roraima): BRl 2.4 million in fines</h4> <p>Burned down 2,433 hectares of pasture. In 2015, he was also charged with illegally mining iron ore on indigenous land. Prosecutors say he and another defendant were partners in a mining business that used dynamite to extract rock for paving. Known as “Doctor Belem,” he has also been charged with—among other crimes—submitting workers to <a href="https://brazilian.report/society/2019/11/28/precisao-documentary-face-modern-slavery-brazil/">slave-like conditions</a>.</p> <h4>4. Edivaldo Dalla Riva (Itaituba, Pará): BRL 2.1 million in fines</h4> <p>Burned 2,148 hectares of native forest. Nicknamed “the Paraguayan,” he was arrested in 2014 by the Federal Police for committing the same crime. According to the police, he and his group would invade public land, deforest the area, torch the land to clear it for pasture, and then illegally sell it on to farmers.</p> <h4>5. Katia Regina de Oliveira Bortoletto (Novo Progresso, Pará): BRL 2 million in fines</h4> <p>She was fined three times: once for destroying 47 hectares of preserved land (BRL 470,000), once for burning down 56 hectares of national forest (BRL 112,000), and again for burning down 727 hectares (BRL 1.4 million).</p> <h4>6. Hudson Silva de Moraes (Pimenteiras do Oeste, Rondônia): BRL 1.5 million in fines</h4> <p>Found guilty of burning down 1,569 hectares for pasture. He is the inheritor of Rical, the biggest rice industry in northern Brazil, and also owns a transportation company and a lottery bureau.</p> <h4>7. Manoel Miguel dos Reis (Candeias do Jamari, Rondônia): R$ 1.1 million in fines</h4> <p>Set fire to 1,114 hectares of pasture.</p> <h4>8. Anderson Sandro Silveira (Novo Progresso, Pará): BRL 1 million in fines</h4> <p>Burned 999.3 hectares of forest. He is one of the plaintiffs in a lawsuit seeking to allow the exploitation of the Jamanxim National Park&#8217;s land. According to a lawsuit filed against him by Ibama, he owns a farm named Estrela D’Alva.</p> <h4>9. Antonio Marcos Maciel Fernandes (Apuí, Amazonas): BRL 995,000 in fines</h4> <p>Burned 994 hectares of forest. Mr. Fernandes is the <a href="https://radaramazonico.com.br/ex-prefeito-de-apui-e-condenado-a-devolver-r-39-milhoes-aos-cofres-publicos/">ex-mayor of Apuí</a>, and was sentenced to return BRL 600,000 to the federal government for not finishing the construction of a school.&nbsp;</p> <h4>10. Oscar Schneider Gonçalves (Candeias do Jamari, Rondônia): BRL 870,000 in fines</h4> <p>Set fire to 870 hectares of land.

Marcelo Soares is a Brazilian journalist specializing in data journalism and reader engagement.