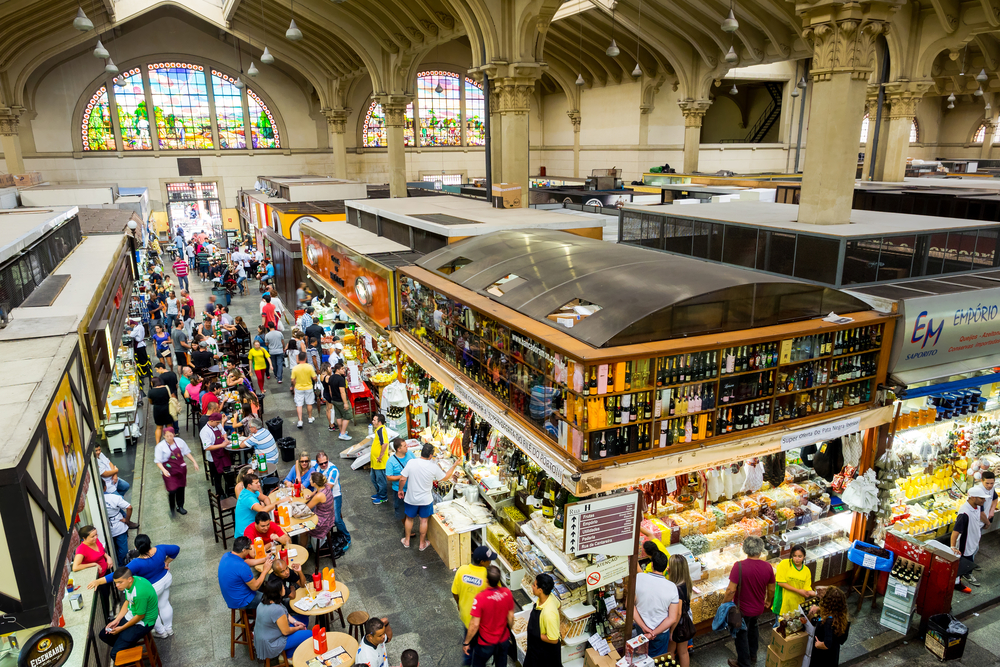 Brazil’s gross domestic product (GDP) is up by 0.6 percent over Q3 2019 when compared to the previous quarter. The result was slightly better than most forecasts and it confirms that the Brazilian economy continues to grow, albeit at a slow pace.

As we anticipated in today’s Daily Briefing,

the rise was driven by the private sector, with government spending down by 0.4 percent amid Jair Bolsonaro&#8217;s administration&#8217;s focus on cutting the primary federal deficit.</p> <div class="flourish-embed" data-src="visualisation/1034688"></div><script src="https://public.flourish.studio/resources/embed.js"></script> <h2>Highlights of Brazil&#8217;s GDP figures</h2> <ul><li><strong>Services:</strong> +0.4 percent (notable performances from commerce and IT &amp; communication sectors, each registering a 1.1-percent bump);</li><li><strong>Industry:</strong> +0.8 percent (the highest growth rate since Q4 2017, mainly driven by 12-percent growth of extractive industries, compensating for a 1-percent drop in transformation industries);</li><li><strong>Agribusiness:</strong> +1.3 percent;</li><li><strong>Family consumption:</strong> +0.8 percent</li><li><strong>Government-driven consumption:</strong> -0.4 percent</li><li><strong>Investments: </strong>+2 percent (below Q2 result of 3 percent);</li><li><strong>Construction:</strong> +1.3 percent</li><li><strong>Exports: </strong>-2.8 percent</li><li><strong>Imports: </strong>+2.9 percent</li></ul> <p>&#8220;Investment levels in Brazil are slowly creeping back up. That is mainly thanks to a better-performing construction sector. After falling for 20 consecutive quarters, it has picked up some steam since last quarter,&#8221; says Rebeca Palis, of the Brazilian Institute of Geography and Statistics (IBGE).</p> <p>This <a href="https://agenciadenoticias.ibge.gov.br/agencia-noticias/2012-agencia-de-noticias/noticias/26172-pib-sobe-0-6-no-terceiro-trimestre-puxado-por-servicos-e-industria">rise</a> in investments has been somewhat expected and reflects the upward trend in confidence levels which have increased continuously since June</p> <p>Family consumption—which accounts for roughly 60 percent of the Brazilian GDP—continued to rally by rising 0.8 percent, after 0.6-percent growth in Q2, heading for the biggest growth rate in a year. As we also mentioned in today&#8217;s <strong>Daily Briefing</strong>, stimuli such as allowing workers to withdraw money from a mandatory severance fund, as well as a government-backed week of discounts in September may have enticed consumers to spend more.</p> <div class="flourish-embed" data-src="visualisation/1035116"></div><script src="https://public.flourish.studio/resources/embed.js"></script> <h2>Argentina crisis hit Brazilian industry hard</h2> <p>Transformation industries registered paltry results over the past quarter, largely due to the <a href="https://brazilian.report/money/2018/05/10/argentina-currency-crisis-affect-brazil/">crisis in Argentina</a>. The neighboring country is the biggest importer of Brazilian manufactured goods but has reduced purchases as its population confronts a severe currency crisis and ballooning inflation rates.</p> <p>The Argentine Peso has lost 60 percent of its value against the U.S. Dollar this year, and President-elect Alberto Fernández has said he would renounce the remaining USD 11-billion tranche of the country&#8217;s International Monetary Fund loan as soon as he takes office.&nbsp;</p> <p>Between January and July, Brazilian exports to Argentina dropped 40 percent, from USD 9.9 to 5.9 billion. &#8220;We will record a trade deficit with Argentina for the first time since 2003, as Argentinians&#8217; purchasing power has dissolved,&#8221; says José Augusto Castro, chairman of the Brazilian Exporters&#8217; Association.</p> <h2>2018 GDP revised upward</h2> <p>As is customary at the end of the year, Brazil&#8217;s official statistics agency reviewed 2018&#8217;s GDP figures. This time, the numbers were revised upward, with the official growth rate going from 1.1 to 1.3 percent. The most significant change came on the performance of Brazil&#8217;s agribusiness sector. Initially, official data recorded 0.1-percent growth, now changed to 1.4 percent. </p> <p>This is largely due to the IBGE’s incorporation of new structural sources which were unavailable in the previous compilation, such as Municipal Agricultural Production (PAM), Municipal Livestock Production (PPM) and Plant Extraction and Forestry Production (Pevs). </p> <p>Conversely, numbers for industry fell from 0.6 to 0.5 percent, while services went from 1.3 to 1.5 percent.