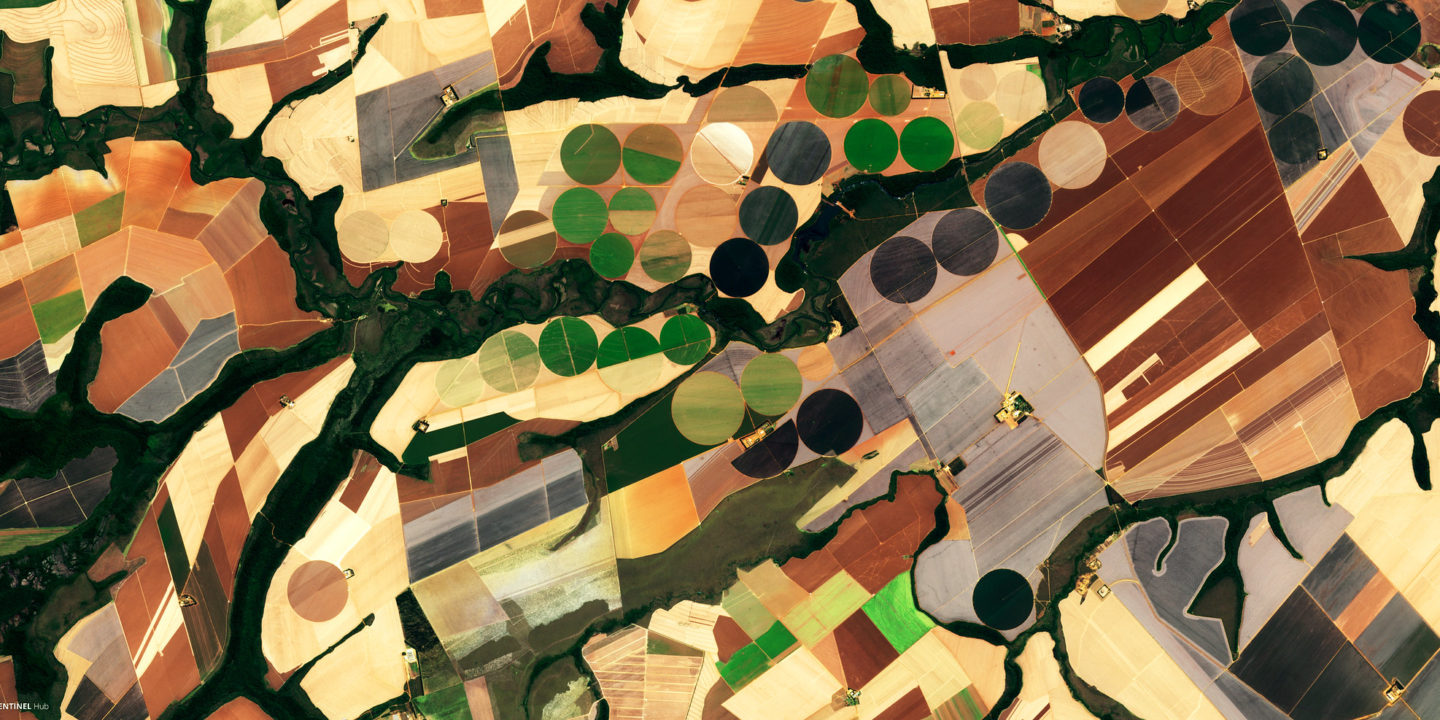 Chinese imports of Brazilian soy were linked to the deforestation of 223,000 hectares between 2013 and 2017, according to new research of production chains by monitoring project Trase. The extent of deforestation is equivalent to an area two times the size of New York City.

Of all importers, China is the most exposed to Brazilian soy linked to deforestation because it buys more than anyone else, said Trase. Between 2013 and 2017, China acquired 42 percent of Brazil’s exported soy, triple the quantity purchased by the EU, the country’s second-largest importer.

Yet, despite the risks associated with its large trade volume, China purchases proportionally less soy from places with higher rates of deforestation than the EU. China brings in most of its soy from southern Brazil, while European purchases are concentrated in areas further north.

“China is the main buyer and really promotes changes in large regions of Brazil,” says André Vasconcelos, a Latin America researcher at Global Canopy, which is responsible for the Trase initiative, along with the Stockholm Environment Institute.

Trase combined data on production, buying patterns and deforestation to calculate China’s “deforestation risk.” The percentage is calculated by multiplying total soy-related deforestation in producing areas by the share of soy output purchased by China. Trase calculated that Chinese buyers are exposed to an 8-percent risk of obtaining deforestation-linked soy.

Brazil planted 128,600 square kilometers of soy to produce the 54 million tonnes exported to China in 2017. Last year, the Asian giant’s soy purchases swelled to 84 million tonnes, mainly as a result of the U.S.-China trade war.

More than 2,000 Brazilian municipalities produce soy destined for China. But according to Trase’s report, only a handful of these are associated with deforestation. 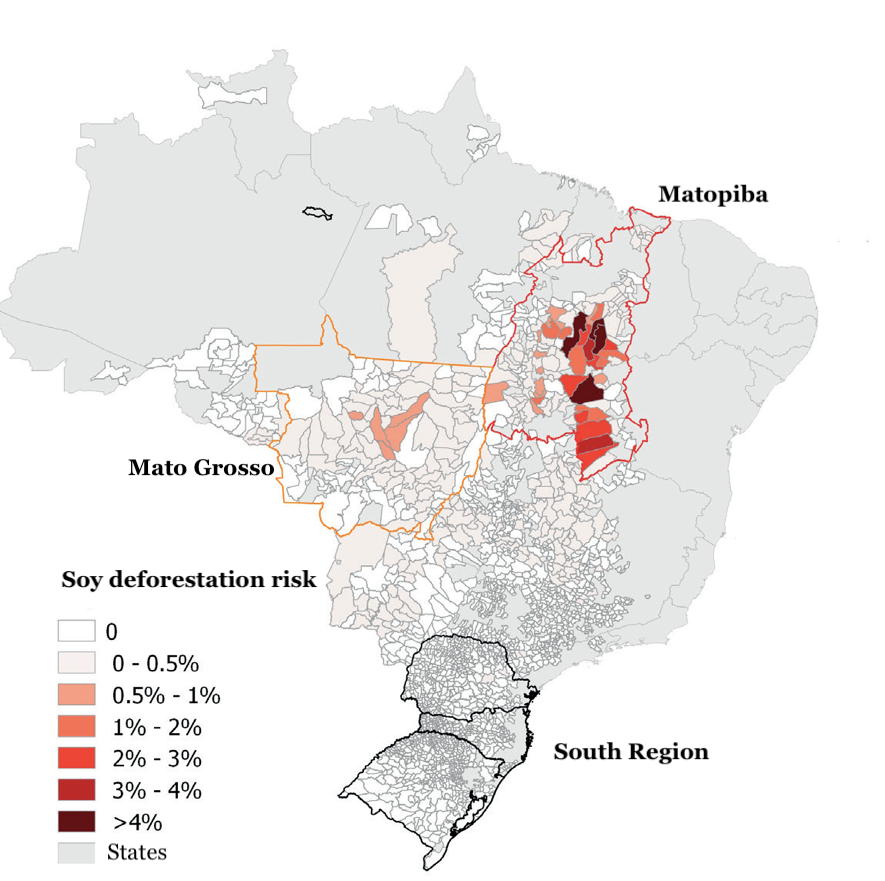 “Because it is very concentrated, we believe that this is an opportunity for China to reduce this impact,” Mr. Vasconcelos said.

Soy from the region known as “Matopiba,” comprising the states of Maranhão, Tocantins, Piauí, and Bahia, carries the highest risk of deforestation. This area contains the Cerrado biome, where soy cultivation is expanding most in Brazil.

It is also the region most threatened by deforestation. Forest conservation group Imaflora estimates that soy production in Matopiba grew 310 percent between 2001 and 2017. This is the region from which the EU buys most of its Brazilian soy.

According to Trase’s calculations, there is an 80-percent chance that soy cultivated in Matopiba is associated with deforestation.

The Trase study also showed that although hundreds of companies are involved in the Brazil-China soy production chain, 70 percent of the total volume exported from Matopiba to China is controlled by six companies: Agrex, Amaggi, LD Commodities, Multigrain, Cargill, Bunge, and ADM. COFCO, the largest Chinese company involved in this chain, also ranks among the largest exporters of soy to China, with a 7-percent share. In Matopiba, COFCO is the seventh-largest exporter, responsible for 6 percent of exports.

In January this year, COFCO president Jun Lyu surprised the World Economic Forum in Davos by urging the international community to join efforts to combat deforestation. In an article, Jun highlighted the impacts of the soy production chain on forests and the need to protect the Brazilian Cerrado.

“Efforts against deforestation would gain significant momentum if more emerging market players in both producing and consuming countries got behind sustainable commodities,” he wrote. “Let’s use this opportunity in Davos to move this collaboration forward.”

André Vasconcelos has seen a growing concern about deforestation in supply chains among Chinese companies. “We are very enthusiastic about COFCO’s position. It is important that the sector takes a stance and works to combat deforestation,” he said.

Companies such as COFCO are also concerned with damage to their reputations and the perceptions of shareholders and consumers. Experts believe that being associated with deforestation could negatively impact the growth of Brazilian soy in new markets.

Studies have shown that deforestation is not necessary to increase production. Soybean production soared 312 percent between 1991 and 2017, while planted area expanded 61 percent, according to data from the watchdog Climate Observatory. Researchers argue that growers should use areas that are already degraded, which in the Amazon and Cerrado add up to over 30 million hectares.

“This land is more or less the size of Brazil’s agricultural production that is abandoned and in the process of degradation,” said Eduardo Assad, a researcher at Embrapa, a state-owned agricultural research company.

Deforestation is already changing rainfall patterns. According to Aprasoja, the Brazilian association of soy and corn producers, Brazil lost 11 million tonnes of crops, worth roughly BRL 17 billion (USD 4.4 billion), as a result of heavy rains and lengthy droughts.

“For quite some time we have been warning that the biggest problems that can happen in our non-irrigated agriculture are a lack of water or too much rain,” said Mr. Assad.

Without standing forests, evapotranspiration—where vegetation captures and pumps water into the atmosphere—decreases dramatically. The rains created by the Amazon are dwindling and no longer reach the Cerrado, for example, which endangers harvests. Persistent rains are just as harmful.

As deforested vegetation decomposes, it also releases greenhouse gases (GHGs). In 2016, Brazil became the world’s sixth-largest emitter of GHGs. That year, half of the 2,278 billion tonnes of carbon emitted resulted from deforestation.

Lazzeri is an award-winning investigative reporter and a documentarian. She has recently been published by Época, Folha de S.Paulo, The Intercept, Veja, and Diálogo Chino.