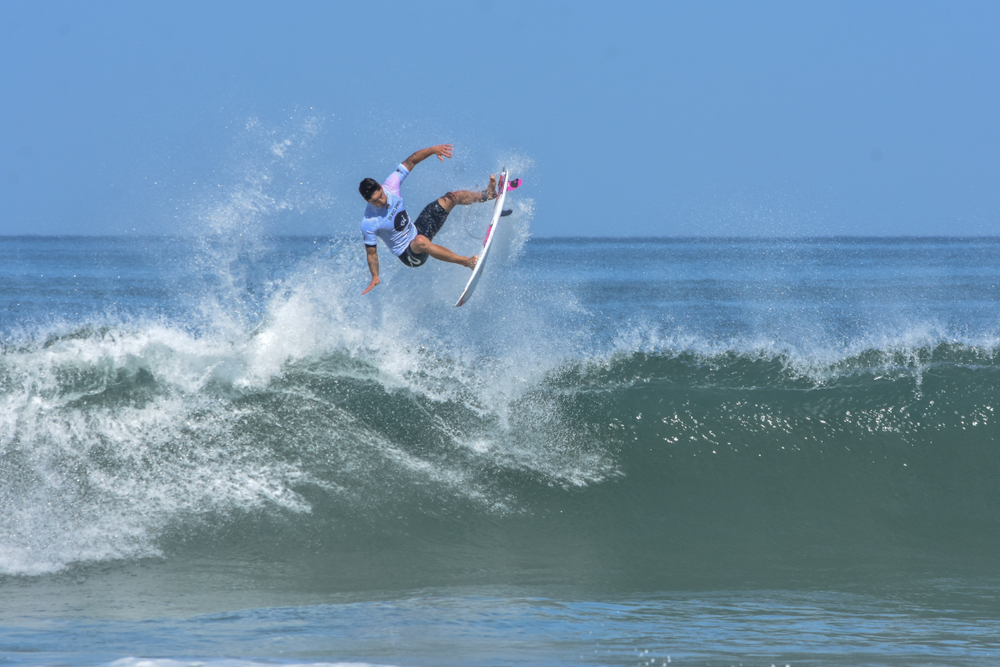 Welcome back to the Brazil Sports newsletter. This week, we’re looking at Brazil’s first national team call-up after the Copa América, as well as going over Dani Alves’ triumphant debut for São Paulo. There’s also a look at surfing, as Brazil is setting itself up to be the big global force in the sport. Thanks for reading! To receive this newsletter in your inbox every Monday morning, click here and sign up.

How the Brazilian Storm came to be

Horns sounded across Pipeline Beach in Hawaii, signaling the end of the 2014 Pipe Masters surfing competition. A crowd gathered around 20-year-old Gabriel Medina, who had just become the first Brazilian to win a world title in surfing. Five years later, Brazil has conquered two more such honors: one for Adriano de Souza and another for Medina, who won his second world title last year.

This recent wave of triumphs comes as no surprise. Brazilian surfers have been making their way up the rankings for years, and a number of young athletes have brought the country into the surfing spotlight. As Brazilians conquer a series of titles, the international community has been referring to them as the “Brazilian Storm.” Of the 38 male surfers competing on the 2019 World Tour—surfing’s most elite competition—11 were Brazilian. In fact, Brazil was the most represented country at this year’s event, with 24-year-old Filipe Toledo finishing as the runner-up.

As Brazilian surfers become increasingly successful, the sport has become extremely popular. Six million Brazilians practice board sports—including surfing, kitesurfing and windsurfing, among others—and another 24 million are surfing fans, who enjoy the sport, but don’t practice it.

What’s more, the sport has had a large impact on the fashion industry. Brazil has 30 million consumers of surfwear, of which 90 percent don’t actually surf. According to Romeu Andreatta, president of the Brazilian Association of Board Sports and Industry (ABIEP), the surfing market is being propped up by these “surfing sympathizers,” but they have lamented a missed opportunity to get these people out onto the water.

The global surfing market has taken a hit since the 2008 financial crisis, shrinking by around 25 percent. Mr. Andreatta says there were 2,700 surfwear stores in Brazil before the recession, and only 1,200 stores remain. The market that once brought in revenue of BRL 4 bn can’t reach half of that today.

“Brazil’s role in surfing is to contaminate everyone with our passion, happiness and our capacity for victory,” said Mr. Andreatta. “We’re always passionate and smiling. Brazil already has these characteristics in football, and it has never been different when it comes to surfing.”

Apart from its natural charm, Mr. Andreatta is working hard with ABIEP to redesign the surfing community’s image in Brazil. He hopes that by preaching inclusivity and the benefits of sports, more people will join the trend.

“We’re changing this culture where you have to either be a playboy or a surfer. Now you can be both,” said Mr. Andreatta. “The more people that get on board, the better. We can’t keep developing an exclusive, tribal concept [for surfing]. Beach culture is for everyone.”

The 2020 Olympic Games. For the first time, Brazilian surfers competed in this year’s Pan American Games, winning three medals. In a breakthrough for surfing, board sports will also be included in the 2020 Olympic Games in Japan. “The Brazilian Surfing Confederation is really betting on the Olympic games,” said Mr. Andreatta. “We’re working hard to instigate new market growth, call attention to these sports and develop a more serious leadership. [The games] will bring a lot of resources. We’re very excited.”

Dani Alves returns to Brazil with a goal

It didn’t take long for Dani Alves to make an impact on his São Paulo debut. With his very first touch of the ball—less than 60 seconds into the match—he forced a save from Ceará goalkeeper Diogo Silva. By 40 minutes, he had the ball in the back of the net, scoring the game’s decisive goal.

Walking off after full-time, Dani Alves said all of his team-mates deserved the plaudits, not just him. But make no mistake, Sunday’s game was all about São Paulo’s new number 10.

Slotting into his new playmaker role behind the strikers, Alves was the focus of São Paulo’s play, touching the ball more than anyone else on the pitch and taking all of the set-pieces. This came across as one part tactical strategy, one part reverence from his younger team-mates. Whenever São Paulo had possession, they looked to Alves to guide them creatively.

This is a new role for Dani Alves. He is no stranger to being heavily involved in matches, charging up and down the right wing, starting attacks and providing assists, but his duty for São Paulo is something completely novel for the 36-year old.

Operating in the central band of the pitch, Dani Alves’ job is to knit attacks together, using his vision and passing range. His defensive responsibilities, once a huge part of his game, are now almost non-existent. Of São Paulo’s 28 tackles and 11 interceptions on Sunday, none came from Dani Alves.

After years of tracking back, he is now surrounded by players who will do the dirty work for him. São Paulo’s 21-year-old central midfielder Liziero put in a big shift to cover for the three-time Champions League winner, as did 19-year-old Antony on the right wing.

Early signs suggest Dani Alves will be a perfect match for São Paulo and the Brazilian Série A. However, there is one potential issue which stands out.

One of the reasons for Dani Alves’ move was to guarantee first-team football in a league that will guarantee him exposure when it comes to the Brazilian national team. He has his eyes on a place in the squad for Qatar in 2022. However, he is playing as a number 10 at São Paulo, a position at which Brazil already has a wealth of younger, better talent. Brazil coach Tite picks him as a right-back, but how long can that go on for if Dani Alves isn’t playing there regularly for his club?

Reactions to the latest Brazil squad

Fresh after winning the 2019 Copa América, Brazil coach Tite has picked a 23-man squad to take on Colombia and Peru in a double-header of friendlies in September. There are a few returning faces, a handful of new names, but the familiar spine of Tite’s Brazil side remains present. Let’s take a look at who made the list:

Goalkeepers. With first-choice stopper Alisson picking up an injury in Liverpool’s league opener last week, Manchester City’s Ederson is likely to start in goal against Colombia and Peru. The presence of 22-year-old Ivan, from second-division side Ponte Preta, came as a surprise. The youngster is one of the most promising young keepers in Brazil at the moment, and his performances in the under-21 Toulon Tournament have attracted some European suitors.

Defenders. Tite seems set on sticking with his Copa América back four of Dani Alves, Thiago Silva, Marquinhos, and Alex Sandro. Real Madrid’s versatile Eder Militão remains in the squad, while there was a first call-up for center-back Samir, of Udinese. Brazilian fans remember Samir as a promising youngster at Flamengo, but he has fallen off the domestic radar somewhat since his move to the north-east of Italy. Like Militão and the injured Rodrigo Caio, Samir is versatile, having been used at left-back on occasion for Udinese.

Midfielders. One of the main question-marks about Tite’s Copa América squad was the absence of Liverpool’s Champions League-winning midfielder Fabinho. The 25-year old has made it back into selection, and will fight for one of the two holding midfielder spots alongside Arthur, Casemiro, and Allan.

Attackers. This time around, the big questions came up front. Neymar returns, despite having not played any football since the Copa América warm-up matches, while Manchester City’s Gabriel Jesus misses out, after picking up a red card in the final against Paraguay. Vinicius Junior has got his place back and will be hoping to see some minutes in Brazil’s front three. The third newcomer to the squad is Flamengo’s Bruno Henrique, who has been in excellent domestic form.

Fifteen rounds into the Brazilian league season, and the table is beginning to take shape. Below is an interactive chart of club performance in relation to their overall wage bills, in an attempt to see who is underachieving and who is punching above their weight.

Right away we see outliers Cruzeiro, who despite having the third-highest wage bill in the league, are stuck in the bottom half of the table. The two richest sides in Brazil, Palmeiras and Flamengo, while firmly near the top of the pile, could be expected to do better considering their financial outlay.

Meanwhile, the bottom half of the league is largely made up of sides who are, in financial terms, doing better than expected. Take a look at Botafogo, who despite being one of the major clubs in Brazil “languishing” in ninth place, are actually doing pretty well considering their zero outlay on transfer fees and wage bill of only BRL 3 million.

Série A. Leaders Santos slipped up again, losing 2-0 away from home to Cruzeiro. Flamengo jumped up to second with a thumping 4-1 win against bitter rivals Vasco. Things are tight at the top, with five points separating the top six sides. Down below, CSA grabbed a huge 1-0 win away to Fluminense, with the Alagoas side scoring their first away goal all season and dragging their opponents into the relegation zone.

Balotelli. After weeks of speculation, Italian striker Mario Balotelli will not be signing for Flamengo, and has instead moved to Brescia, in his home country. Balotelli now joins a long list of big-name stars who “almost” made the move to Brazil, reminiscent of the time Didier Drogba was in talks with Corinthians, and when Nicolás Anelka was announced at an Atlético-MG player, before being rubbished by the man himself.

Coutinho. Just 18 months after his EUR 120m move from Liverpool to Barcelona, Brazilian playmaker Philippe Coutinho is on the move again, joining German champions Bayern Munich on a season-long loan. Coutinho’s exit appears to close the door on any possibility of Neymar rejoining the Catalan side, as the 27-year-old was floated as a possible makeweight in a swap deal with PSG.

Not the bees! The Série A match between Fortaleza and Internacional was delayed by around 20 minutes this weekend due to a swarm of bees taking sanctuary atop one of the corner flags at the Castelão stadium. The fire brigade managed to expel them with a fire extinguisher and this unidentified green substance.

Elkeson. Brazilian striker Elkeson, formerly of Botafogo, is set to be the first player without Chinese heritage to play for the China national team. The Guangzhou Evergrande striker has been playing in the country since 2013 and has already obtained a Chinese passport.

UFC. Middleweight Paulo Borrachinha won the Fight of the Night bonus for his show-stopping battle against Cuban Yoel Romero at UFC 241 on Saturday night. Borrachinha won the bout by unanimous decision and UFC president Dana White has hinted at a potential title shot for the 28-year-old in the near future.

In the dying minutes of the match against Palmeiras, Grêmio center-back David Braz unleashed this rocket of a strike to tie the game at 1-1. From around 25 yards out, Braz caught the ball sweet and saw it fly into the top left-hand corner of the net.

The boom of esports in Brazil