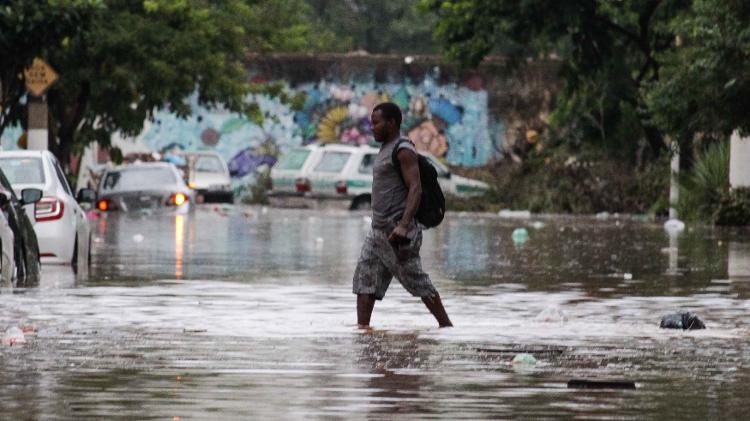 Footage from São Paulo on Monday was shocking. Cars being swept away by rushing streams, trees ripped from the ground, people rescued with jet skies in areas usually full of rush-hour traffic, subway stations being shut down. It seems that every summer we tell the same story about how tropical storms—which always come this time of year—have caught local authorities off guard and caused human tragedies and material losses. A month ago, six people died after floods in Rio de Janeiro. Now, 12 people have died in Greater São Paulo.

The city’s administration claims that Monday’s rains accounted for 90 percent of the volume expected for the entire month and that nothing could have been done to prevent the damage. This is only partially true. Indeed, this week’s rainfall was exceptional, and Monday saw the second-highest amount of rain in one day since 1995. While several of the city’s neighborhoods are geographically wedged in valleys, floods are a decades-long problem and could have been corrected—or at least mitigated—by now.

</p> <p>The most obvious list of solutions would include investments in popular housing projects, an effective alert system that actually warned citizens before danger happens, and better treatment of waste.</p> <figure class="wp-block-image"><img src="https://brazilian.report/wp-content/uploads/2019/03/rain-sao-paulo.jpg" alt="são paulo flood" class="wp-image-14673" srcset="https://brazilian.report/wp-content/uploads/2019/03/rain-sao-paulo.jpg 680w, https://brazilian.report/wp-content/uploads/2019/03/rain-sao-paulo-300x200.jpg 300w, https://brazilian.report/wp-content/uploads/2019/03/rain-sao-paulo-610x406.jpg 610w" sizes="(max-width: 680px) 100vw, 680px" /><figcaption>Rainfall drove São Paulo into chaos. Photo: FP</figcaption></figure> <h2>Deforestation and waste disposal</h2> <p>The advances of urbanization over green areas has always been an issue in São Paulo. The more Latin America&#8217;s largest city grows, the more impermeable its soil becomes. Asphalt essentially turns the streets of São Paulo into pipes, accelerating the speed of the water, overflowing nearby canals.</p> <p>Meanwhile, the water runoff network keeps getting clogged by the abundance of waste that is poorly treated. The city produces an average of 20 million tons of waste every day and is the fourth largest producer of plastic waste, according to a recent report by the World Wide Fund for Nature. But only 1.2 percent of this is adequately recycled. &#8220;Today, we see floods in areas that traditionally didn&#8217;t have them, and it is because networks are clogged,&#8221; says Nabil Bonduki, a professor of urbanism at the University of São Paulo, in an interview.</p> <h2>Budget cuts for flood prevention measures</h2> <p>According to a study by newspaper <em>Folha de S.Paulo</em>, the local administrations at the municipal and state levels had allocated BRL 5.3 billion for drainage projects between 2016 and 2018. The list of projects included reservoirs, channeling of streams, and drainage networks. But only 41 percent of the funds were spent. Only when it rains like it did on Monday—and people get killed—do such shelved projects become a priority again.</p> <p>Since former Mayor (and current State Governor) João Doria took office in 2017, the city of São Paulo has slashed its budget for flood prevention. In two years, the administration (now headed by Bruno Covas, elected as Mr. Doria&#8217;s deputy) spent only one-third of what was expected.</p> <h2>Prioritizing roads over rivers was a mistake</h2> <p>If you live in or have even been to São Paulo, it is likely that you’ve walked over a waterway without even noticing it. There are between 300 and 500 of them in Brazil’s biggest city, running through pipes extending from 1,500km to 4,000km. And the fate of the city’s main rivers doesn’t have a happy ending. They’ve become ugly and polluted—like infected open wounds on the surface of an otherwise great city.</p> <p>But how things have become so bad? The documentary <em>Between Rivers</em> tracks the reasons why local authorities have historically looked at the rivers as a nuisance, as well as how they decided to remove them and open space for cars and buildings.</p> <div id="buzzsprout-player-1078991"></div> <script src="https://www.buzzsprout.com/299876/1078991-44-how-sao-paulo-killed-its-rivers.js?container_id=buzzsprout-player-1078991&amp;player=small" type="text/javascript" charset="utf-8"></script> <hr class="wp-block-separator"/> <p>“The price we are now paying is high. We hide our rivers underground, but every year during the rainy season, we notice their presence in floods,” says director Caio Ferraz. The documentary was released in 2008, and has become a reference in the debate about São Paulo’s water resources. This is especially the case in the last two years, when São Paulo, between 2014 and 2015, endured what was arguably its worst water crisis to date.</p> <p>The creators of the movie are also producing a web series about the water crisis, called <a href="https://vimeo.com/25113784">Live Volume</a>.

Nanobubbles could save a dead river in São Paulo

São Paulo could be headed to another water crisis

Is São Paulo really getting its own Puerto Madero?