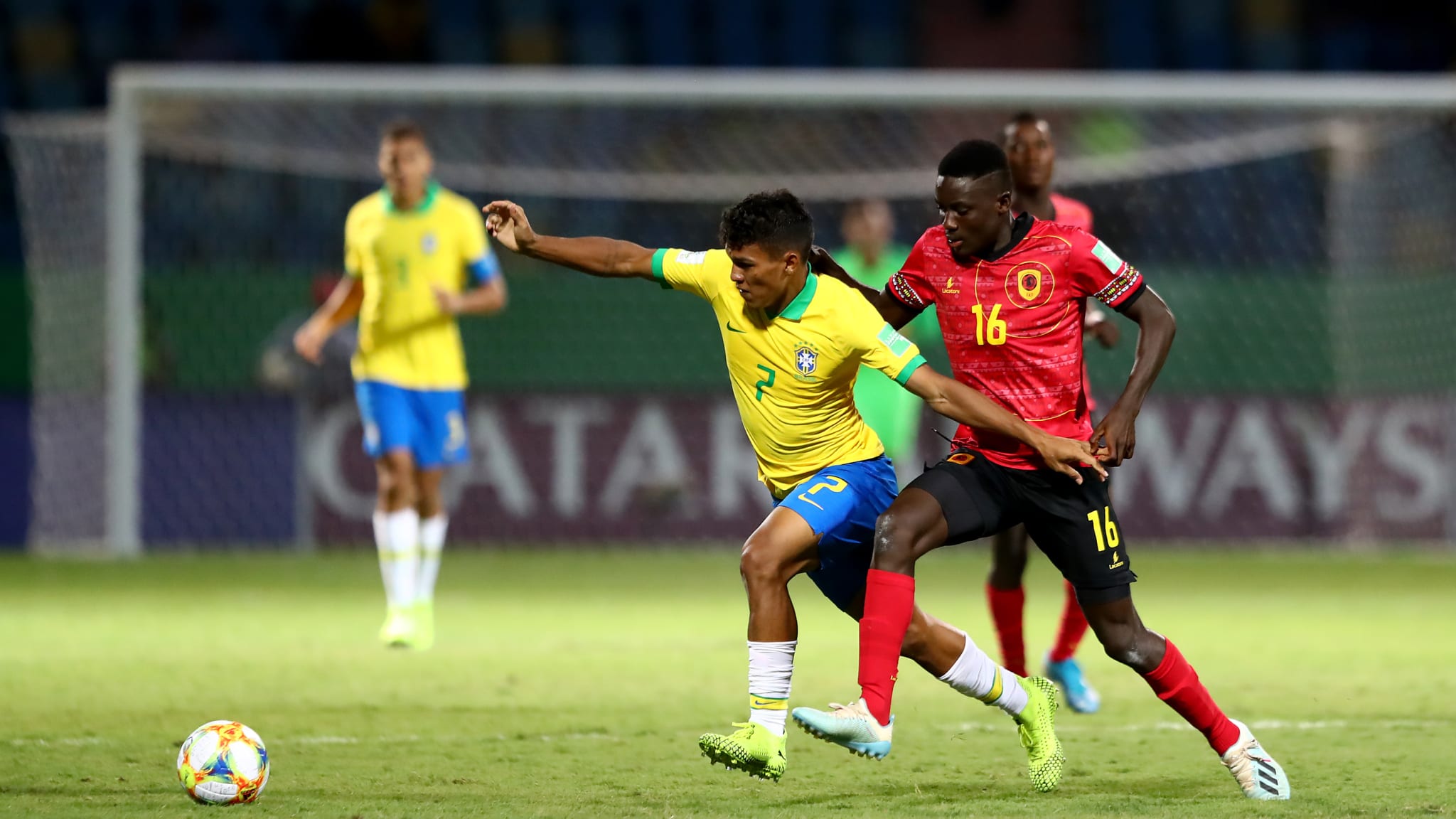 Welcome back to the Brazil Sports newsletter. This week, we’re looking at the rough Brazilian diamonds on display at the U-17 World Cup, being hosted right here at home. Plus, an innovative idea to combat piracy and boost shirt sales. Happy reading!

Mining talent at the U-17 World Cup

One of the most satisfying things about covering football in Brazil was the opportunity to watch future world-beating players in their formative years, showing off their talents at home before heading to Europe. There were the ones who made it and others who didn’t, but the thrill lay precisely in this uncertainty, of young humans thrust into a high-stakes environment where character is often as important as natural talent.

This happens a lot less nowadays. When youngsters break into the first team of Brazilian clubs, they often already have deals agreed with Real Madrid, or Barcelona, making but a brief cameo in front of their home fans before heading off into the European sunset. The most recent wave of starlets—Gabriel Jesus, Vinicius Junior, Rodrygo—managed to dazzle Brazilian audiences before leaving, but many set off before even appearing for their home clubs.

Go younger. Now, the only chance Brazilian football fans get to see a pool of undiscovered talent is by watching youth football. Before it was the U-20s, now it is the U-17s, with the World Cup taking place as we speak, and hosted in Brazil.

The desperation for finding the next wunderkind is so high that the eyes of the world’s biggest clubs are also fixed on these precocious players. Brazil’s game against Angola had scouts from no less than 80 clubs watching in the stands, and advanced video scouting means that almost every medium to high-level club will have someone keeping an eye on these kids, who are barely old enough to drive.

The World Cup is already in the last-16 phase, with Brazil blowing past their opponents and boasting the best record of all 32 qualified sides. Beating Canada, New Zealand, and Angola, Brazil now face Chile in the next round.

Who to watch in the World Cup. The big name of this Brazil side is Vasco’s 17-year old forward Talles Magno. Lithe yet bordering on lightweight, Talles is a tremendously talented and confident young player who has already broken through to the Vasco first team, playing 15 games so far this season.

Attention quickly turned in his direction when, during a game against Fortaleza last month, he pulled off a stunning rainbow flick that ended up with his opponent being sent off. There’s an enthusiasm about his play which is truly captivating. He’s unpredictable—being able to play left and right—and has plenty of tricks up his sleeve, yet his play is objective and doesn’t appear to be improvised. Major sides already have their eye on him, with Sporting Lisbon having an option of first refusal.

Brazilian player, Argentinian name. Another player to have made a big impression early on is Palmeiras’ forward Gabriel Veron, named after former Argentina national team star Juan Sebastián Veron. Quick and sturdy, he tore Angola apart in Brazil’s final group game, laying on a goal for his team-mate Peglow and grabbing one himself—a superb solo goal, slaloming through the defense.

Hoping to follow in the footsteps of his other namesake Gabriel Jesus, there is some expectation that Gabriel Veron will be brought into the Palmeiras first team after returning to his club. Barcelona have their eye on him, but his EUR 60 million release clause could see him staying at home for a little longer.

Northeastern club Fortaleza have come up with an ingenious ploy to combat piracy of their official club shirts, by manufacturing their own “simplified” version of their home and away jerseys, selling them at cut prices around the stadium on matchdays.

Why it matters. Football shirts in Brazil are expensive. While the average replica jersey price of around BRL 250 (approximately USD 63) is comparable to U.S. and British standards, factoring in the fact that wages in Brazil are far lower means that an official shirt is completely out of reach for working-class fans. Someone earning minimum wage would have to spend 25 percent of their salary to buy a single jersey.

As such, piracy is rampant with Brazilian football kits. These knock-offs are far more affordable and often of impressive quality, but the money spent on them is not passed on to the clubs, and they are often made in textile shops with unfair and borderline slave-like working conditions.

Undercutting the pirates. Fortaleza’s idea was to manufacture a simple version of their home and away shirts—with such cost-saving measures as embossing the club crest, as opposed to stitching—and sell them at an accessible price of BRL 60. The jersey is near identical from the original at first glance, and would be an excellent model to be followed for clubs all around the country.

We mentioned him above, and Gabriel Veron’s goal against Angola during the U-17 World Cup gets the nod as this week’s best finish. Picking the ball up on the halfway line with his back to goal, Veron careers past four defenders and slotted it past the goalkeeper. Tremendous turn of pace, good close control and excellent vision. A very impressive goal indeed from the 17-year-old.

You should also know

Série A. Flamengo saw their lead at the top of the table cut down to eight points in midweek after a difficult draw away to Goiás. However, they got back to winning ways on Sunday, smashing Corinthians 4-1 in the Maracanã, causing their opponents to sack their coach Fábio Carille. Elsewhere, there were important derby wins for Grêmio and Palmeiras, beating Internacional and São Paulo, respectively. Another week without a win kept Fluminense in the relegation zone, now two points off safety with eight games remaining.

Ronaldinho. After being appointed as an ambassador of the Brazilian tourism board despite having had his passport seized for unpaid environmental fines, former World Player of the Year Ronaldinho Gaúcho settled his BRL 6 million debt and managed to get his travel document back just in time for a glamour friendly in Tel Aviv. The “Shalom Game” featured other former Brazil stars such as Rivaldo, Cafu, Kaká, Bebeto, and Roberto Carlos.

Spending spree. Though they have yet to get their hands on the national title or Copa Libertadores, Flamengo are thinking big for next year. Names such as Edinson Cavani, Diego Costa, and Arturo Vidal have been linked to the Rio de Janeiro club.

The Road to Santiago? While the executives are working out transfer targets for next year, Flamengo’s players and fans have their eyes fixed on November 23, when they will face River Plate in the Copa Libertadores final in the Estadio Nacional in Santiago. Or will they? A wave of protests in Chile has seen that country’s government cancel the holding of an important climate event at the beginning of December. The Sports Minister has stressed the Libertadores final will go ahead, but there is still the chance of a last-minute venue change.

Queens of South America. After losing on penalties in the final of the Brazilian championship, Corinthians managed to get their hands on some well-deserved silverware, winning their second Women’s’ Copa Libertadores. They beat Ferroviária in the final, the side who pipped them to the national title. Corinthians have set records this year, with their win over Ferroviária taking them to 43 games unbeaten, grabbing an extra win on Saturday in the first leg of the São Paulo state championship final.

Abuse in gymnastics. After an investigation opened in 2016 and revealed by weekly TV magazine show Fantástico, Brazilian gymnastics coach Fernando de Carvalho Lopes has become a defendant for four accusations of rape of underage girls. Mr. Lopes was accused of sexually abusing 11 other girls, but prosecutors claim the cases have exceeded the statute of limitations. Mr. Lopes, who was previously the gymnastics coach for the Brazilian Olympic team, claims his innocence and says the accusations are an act of “revenge” by former athletes and fellow coaches.

Bruno. A while back, we wrote about convicted murderer and former goalkeeper Bruno Fernandes, who has managed to find THREE clubs to offer him contracts while still serving his 22-year sentence. His latest club, Poços de Caldas, decided to terminate his deal after only 45 minutes on the pitch. After 24 hours, northeastern club Barbalho declared they’d agreed to a pre-contract with the goalkeeper and convicted murderer.