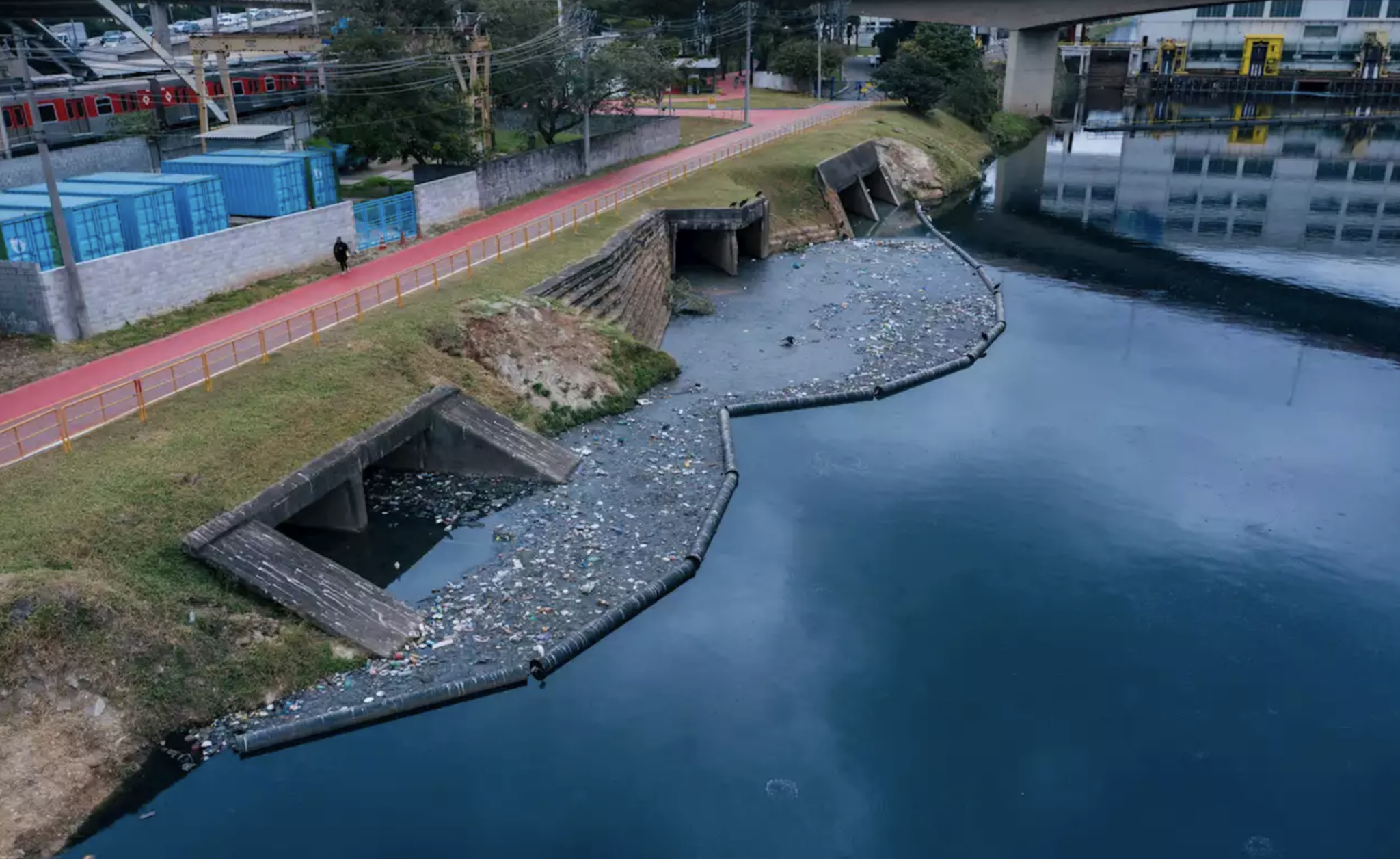 Walking around the Rio de la Plata in Buenos Aires is among the most pleasant experiences the city has to offer. Puerto Madero’s pool of bars and restaurants framed by the Puente de la Mujer bridge, coupled with a beautiful park and the calm waters of the river creates one of the most picture-perfect scenes of the Argentinian capital—enough to make tourists pay no attention to the fact that the charming landscape sits on top of an old landfill. That’s the kind of experience Governor João Doria is looking to build

on the São Paulo Pinheiros River. </p> <p>Mr. Doria, who already served half a term as São Paulo’s mayor, has promised to clean the river—which has been declared biologically dead for years—by the time he leaves office in December 2022.</p> <p>“The deadline established by the governor to Sabesp, Emae, DAEE, Cetesb, and related agencies by way of the Infrastructure and Environment Department is December 2022 for us to deliver a clean river and riverbanks for São Paulo’s population,” he said.</p> <p>Mr. Doria also plans to privatize the <a href="http://www.emae.sp.gov.br/elevatorias2.htm">Usina Traição</a>, a now-empty water-lifting station built in the 1940s. It is located nearby the Ary Torres bridge, connecting two of <a href="https://brazilian.report/money/2019/06/04/luxury-homes-brazil-millionaires/">São Paulo’s most expensive neighborhoods</a>, Cidade Jardim and Vila Olímpia. Due to its privileged location, the government aims to transform the space into São Paulo’s very own Puerto Madero, complete with bars and restaurants. </p> <figure class="wp-block-image"><img src="https://brazilian.report/wp-content/uploads/2019/08/Puerto-Madero-in-Buenos-Aires-1024x537.jpg" alt="Puerto Madero in Buenos Aires" class="wp-image-22848" srcset="https://brazilian.report/wp-content/uploads/2019/08/Puerto-Madero-in-Buenos-Aires-1024x537.jpg 1024w, https://brazilian.report/wp-content/uploads/2019/08/Puerto-Madero-in-Buenos-Aires-300x157.jpg 300w, https://brazilian.report/wp-content/uploads/2019/08/Puerto-Madero-in-Buenos-Aires-768x403.jpg 768w, https://brazilian.report/wp-content/uploads/2019/08/Puerto-Madero-in-Buenos-Aires-610x320.jpg 610w" sizes="(max-width: 1024px) 100vw, 1024px" /><figcaption>Puerto Madero in Buenos Aires</figcaption></figure> <h2>A Herculean task for São Paulo</h2> <p>To carry out this plan, the government plans to privatize the space—which currently belongs to Emae, a state-owned company that manages energy generation in São Paulo’s metropolitan area—as well as burying the electric cables on the rivers banks. The cost is expected to <a href="https://veja.abril.com.br/brasil/doria-anuncia-plano-de-despoluicao-do-rio-pinheiros-no-valor-de-r-15-bi/">reach BRL 1.5 billion</a> and will be shared with the private sector. </p> <p>Mr. Doria <a href="https://brazilian.report/newsletters/weekly-report/2019/08/10/sao-paulo-governor-joao-doria-china/">visited China recently</a>, trying to call investors&#8217; attention to the project. According to him, the <a href="https://sao-paulo.estadao.com.br/noticias/geral,na-china-doria-diz-que-estatal-tem-interesse-em-despoluir-o-pinheiros,70002955584">China Railway Construction Corporate</a> has demonstrated interested in investing in the river’s decontamination in exchange for the possibility to operate passenger and cargo transportation, besides entertainment options on the riverbank.</p> <p>But whoever chooses to bid for the project will have a Herculean task at hand: 80 percent of the Pinheiros River is sewage, brought by its 25 affluent rivers. Sabesp, the state-owned sanitation company of São Paulo, identified that 500,000 homes need to be connected to sewage treatment stations—and 73,000 of them are not connected to the sewage collection networks. </p> <p>It will also be necessary to remove the 1.2 million cubic meters of trash out of the river and increasing the monitoring of water quality. The government estimates that 14 bidding processes will be required to clean the basins connected to the Pinheiros River; two invitations for bids have already been published.</p> <p>Around 3.3 million citizens will be affected by the works, which are expected to generate 3,700 direct and indirect jobs.</p> <p>As a way to make sure the goals will be conquered this time, the state government decided to adopt a new form of procuring services. Payments for the private sector will be performance-based: the cleaner the water, the more money they receive. “To evaluate performance, targets such as the number of new properties connected to the network and water quality will be evaluated,” said Sabesp. Of Pinheiros’s 25 sub-basins, 16 will be managed on a performance basis.</p> <script src="https://www.buzzsprout.com/299876/1078991-44-how-sao-paulo-killed-its-rivers.js?player=small" type="text/javascript" charset="utf-8"></script> <hr class="wp-block-separator"/> <h2>An exercise of faith</h2> <p>The people of São Paulo has been demanding authorities to clean up the city’s most important rivers—the Pinheiros and Tietê—for almost 30 years. Back then, the rivers were silted, causing <a href="https://brazilian.report/society/2019/03/12/sao-paulo-chaos-rainfall/">massive floods</a> and damages in the city at almost every severe rainfall.</p> <p>In 1992, then governor Luiz Antonio Fleury launched a project to clean the Tietê—the most important river in São Paulo state—promising that <a href="https://brasil.elpais.com/brasil/2015/07/13/politica/1436818691_754283.html">he would drink the river’s clean water</a> by 2005, the first deadline to finish the project.</p> <p><a href="http://site.sabesp.com.br/site/imprensa/noticias-detalhe.aspx?secaoId=65&amp;id=8077">Three decades and USD 3 billion</a> later, neither Mr. Fleury or any of the governors that came after him are able to fulfill this promise. According to the state government, since the project started, the length of pollution at Tietê River diminished from 530 km to 122 km, and 10 million citizens gained access to sewage collection and treatment. Yet, the positive results aren&#8217;t those which greet visitors to São Paulo, with the urban stretches of the Tietê giving off a famous rotten stench. This won’t be anytime soon, either. Governor Doria estimates that it will take at least another eight years to make the Tietê a clean river.</p> <p>Even so, Mr. Doria said he would rather not judge his predecessors, but wasn’t afraid to commit himself to the project, guaranteeing he would fulfill his word.</p> <h2>Is there hope?</h2> <p>Tietê and Pinheiros are not alone when it comes to dead urban rivers, but some examples around the world may serve as inspiration. London&#8217;s Thames River was pronounced dead in 1957, but is now filled with wildlife and tourism boats.</p> <p>The clean-up took decades and was a combination of investment in better sewage treatment, a reduction in the use of pesticides which ended up in the river carried by the rain, and less contamination by metals, <a href="http://www.bbc.com/earth/story/20151111-how-the-river-thames-was-brought-back-from-the-dead">reports the BBC</a>.</p> <p>Even though it is much better than it was in the Victorian era, when it was known as “The Great Stink”—exhaling a nasty smell that forced parliament sessions to be interrupted when the wind was strong—the Thames still faces challenges to survive.</p> <p><a href="https://www.bbc.com/news/uk-england-london-47305582">Also according to the BBC,</a> in 2019, one of the worst problems is the pollution of plastic and single-use items. To tackle this issue, the government and civil-society organizations are teaming up. Thames 21, an organization that aims to recover the river, has projects such as “<a href="https://www.thames21.org.uk/improving-rivers/land-of-the-fanns/&#91;">Land of The Fanns</a>”, which aims to recover Thames’ lowlands.</p> <p>The case illustrates how complex São Paulo’s challenge is. For specialists consulted by radio broadcaster CBN, the Pinheiros and Tietê rivers cannot have a full recovery without work to restore the banks and lowlands that were altered or destroyed when the rivers&#8217; courses were altered, for the construction of São Paulo’s most important expressways.  </p> <p>“For environmentalists, a river is living water, with fish, that provides sustainability for its community. And those two big urban rivers won’t become that again, neither will the rivers of New York, London, Paris or South Korea,” said Malu Ribeiro, from NGO SOS Mata Atlântica, in <a href="https://cbncuritiba.com/em-30-anos-r-13-bi-foram-gastos-na-despoluicao-dos-rios-pinheiros-e-tiete/">an interview with CBN</a>.

Nanobubbles could save a dead river in São Paulo