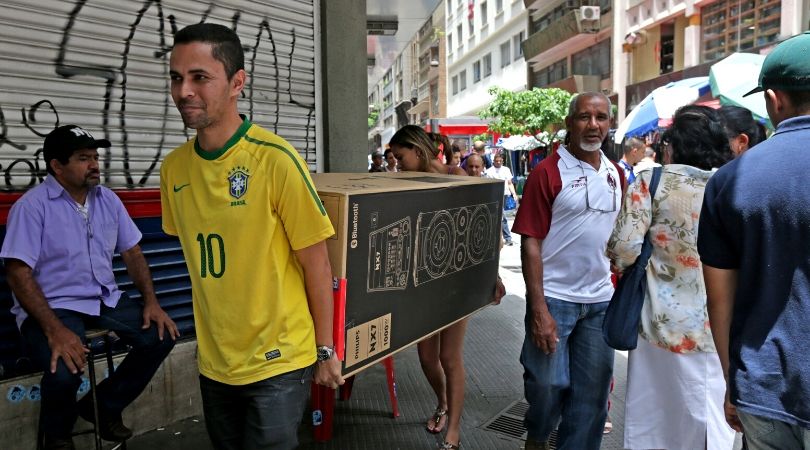 You’re reading The Brazilian Report‘s weekly tech roundup, a digest of the most important news on technology and innovation in Brazil. This week’s topics: Brazilian retailers’ Black Friday expectations. Fintechs. The arrival of a Chinese tech giant to Brazil. And a plan to connect public schools to the internet.

Black Friday even more crucial for retailers in 2019

Only nine years since the very first Black Friday in Brazil,

and the day after Thanksgiving—which is not even celebrated in the country—is already the biggest shopping event of the year in Brazil, overtaking Christmas. All indications point to an even bigger edition this year, bringing a crucial boost to Brazil’s economy.&nbsp;</p> <p>According to the Brazilian Association of Shopping Malls (Alshop), Brazilian retailers expect Black Friday sales to reach BRL 3 billion this year, 18 percent more than 2018. Research from Google and consultancy firm Provokers, released this week, pointed out that Black Friday-related search-engine queries grew 68 percent in October in comparison to last year. The most desired items were home appliances and electronics.&nbsp;</p> <p>Alshop put this growth down to lower interest rates, Christmas bonuses, and stimuli provided by the government, such as the authorization of withdrawals from workers&#8217; individual severance funds.</p> <p>Ilan Arbetman, a stocks analyst at brokerage firm Ativa Investimentos, agrees with that view. “The government—understanding the macro-economic challenges—has been focusing on the indexes that deliver quicker results. (&#8230;) There is every likelihood we will see growing numbers. I believe the event will be a success,” he told <strong>The Brazilian Report</strong>, adding that, judging by the weight of e-commerce on Q3 earnings reports, Black Friday will have huge importance for companies.&nbsp;</p> <script src="https://www.buzzsprout.com/299876/1079006-39-were-you-scammed-during-brazil-s-black-friday.js?player=small" type="text/javascript" charset="utf-8"></script> <h4>New trends</h4> <p>2019’s Black Friday is also pointing toward some changes in consumer behavior. Unlike the United States, the shopping frenzy started as a digital phenomenon in Brazil, before being picked up by brick-and-mortar stores later on. Now, according to Google, physical and digital Black Friday shoppers will be equal, with 39 percent of consumers placing great importance on the availability of a &#8220;buy online, pick-up in-store&#8221; option when selecting retailers.&nbsp;</p> <p>Besides the new preferences of consumers, Mr. Arbetman points out that increased competition—in particular, the expansion of Amazon&#8217;s Brazilian operations—as a driver for new, aggressive jostling among <a href="https://brazilian.report/money/2019/04/23/via-varejo-retailer-bargain-casino/">retailers</a>. </p> <p>On Thursday, Magazine Luiza announced a partnership with clothes store chain Lojas Marisa to encourage the sale of durable goods, such as cellphones, in Marisa’s stores. By way of this deal, customers will be able to click-and-collect items in Marisa stores, bringing more business and giving Magazine Luiza a physical foothold in new areas, such as Rio de Janeiro and Brasília.&nbsp;</p> <hr class="wp-block-separator"/> <h2>Chinese video-sharing app gambling on reaching &#8220;everyday Brazilians”</h2> <figure class="wp-block-image"><img src="https://brazilian.report/wp-content/uploads/2019/11/shutterstock_1079290436.jpg" alt="Kwai Brasil" class="wp-image-27988" srcset="https://brazilian.report/wp-content/uploads/2019/11/shutterstock_1079290436.jpg 1000w, https://brazilian.report/wp-content/uploads/2019/11/shutterstock_1079290436-300x201.jpg 300w, https://brazilian.report/wp-content/uploads/2019/11/shutterstock_1079290436-768x514.jpg 768w, https://brazilian.report/wp-content/uploads/2019/11/shutterstock_1079290436-610x408.jpg 610w" sizes="(max-width: 1000px) 100vw, 1000px" /><figcaption>Photo: Faizal Ramli/Shutterstock</figcaption></figure> <p>Brazil has become the latest frontier for Chinese tech startups. After the success of TikTok—the video-sharing app that made the Chinese company Bytedance the most valuable startup in the world—it is now time for Kuaishou Technology to reach out to the Brazilian audience.&nbsp;</p> <p>The company’s international <a href="https://www.instagram.com/kwaibrasil/?hl=en">video app Kwai</a> is now among the top three most downloaded applications on Brazil&#8217;s Play Store, with seven million daily users according to the company&#8217;s research. The platform allows its users to make short edited videos and upload them to other social media, such as YouTube or WhatsApp, which are both hugely popular in Brazil.&nbsp; <br><br>Kwai&#8217;s developers say that they intend to adapt their app to the tastes of “everyday Brazilians” to gain a foothold in the country, which they describe as an “especially attractive market”.&nbsp;</p> <p>“Kwai distributes traffic not only to celebrities but also to everyday people and promotes niche content, allowing it to be seen fairly, so users can communicate in the community equally and the content is closer to the people and is more real”, said Yin Lu, spokesperson for Kuaishou Technology, to <strong>The Brazilian Report</strong>.&nbsp;&nbsp;</p> <p>To overcome possible cultural differences, the app is betting on a “go local” strategy,&nbsp; focused on learning and adapting according to each country’s characteristics, said Ms. Yin in an emailed statement.&nbsp;</p> <p>So far, some of the differences with the Chinese market have already come up. According to Kwai’s research, the most popular content themes for Brazilians on the platform are comedy (59%), followed by music (54.4%), while in China, the go-to content is comprised of everyday life videos (28%), followed by beauty-related content (14%).&nbsp;</p> <p>“Brazilian users are more passionate and more humorous, and funny and musical videos are more popular,” she said, adding that the company aims to keep working to provide more content based on local preferences.&nbsp;</p> <hr class="wp-block-separator"/> <h2>Central Bank wants to authorize 60 credit fintechs to operate in 2020&nbsp;</h2> <p>The president of Brazil’s Central Bank, Roberto Campos Neto, told the Senate’s Economic Affairs Committee that the autarchy intends to authorize the operation of 60 credit fintechs in Brazil next year. He added that 13 have already received operating licenses and 20 are awaiting approval.&nbsp; In his view, the measure would increase competition and provide better credit conditions for consumers. According to the report Fintech Deep Dive 2018, produced by the Brazilian Association of Fintechs (ABFintechs) and PwC Consultancy, companies focused on credit already account for 21 percent of fintechs in Brazil.&nbsp;</p> <hr class="wp-block-separator"/> <h2>Brazil plans to connect 70,000 public schools to the Internet&nbsp;</h2> <p>This week, the Minister of Education launched an expansion to the <em>Educação Conectada</em> (Connected Education) program, aiming to provide internet access to 27.7 million students in 70,000 schools around the country. According to the ministry, the change constitutes adding 32,000 schools to the previous target. In 2018, 9,900 schools received internet access.&nbsp;</p> <p>To achieve its goal, the government will invest BRL 224 million until the end of the year to hire internet services, deploy infrastructure to distribute signals to schools and procure equipment.&nbsp; The ministry has also increased its target for the connectivity of rural schools, increasing the goal from 6,500 to 8,000. Currently, more than 7,000 such schools already have internet access.</p> <p>However, schools must meet certain requirements to be eligible: having more than 14 enrolled students, at least one computer for administrative purposes and one working classroom.&nbsp;

Brazil’s Black Friday: from scam to biggest e-commerce date of the year