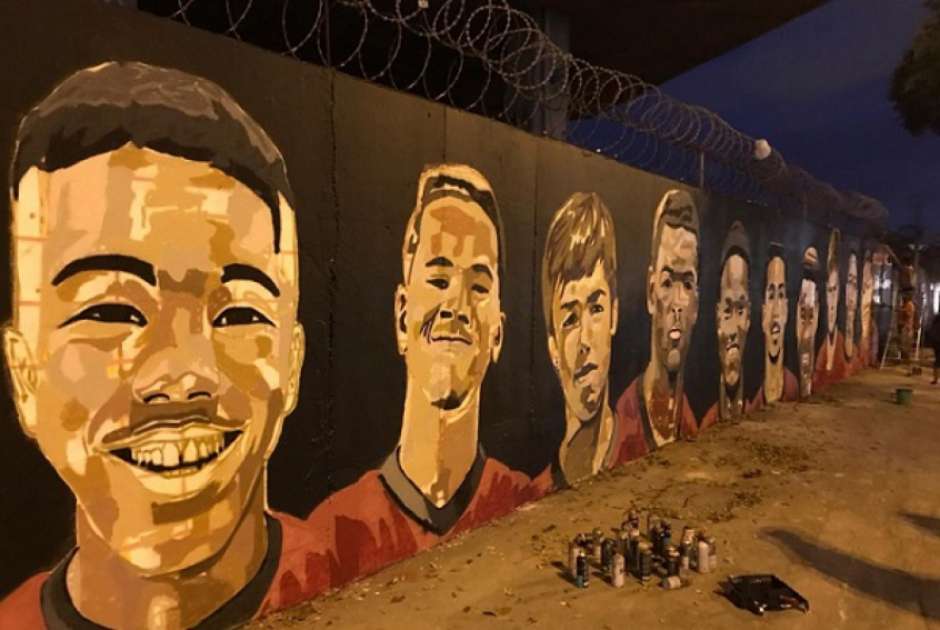 Wall painted in homage to the boys killed during the Ninho do Urubu fire.

Welcome back to the Brazil Sports newsletter! This week, one year after the fire that killed ten youth players at the club’s training ground, Flamengo come in for widespread criticism for their handling of the one-year anniversary. We also have a look at Brazil’s Olympic football generation, who booked their place in Tokyo with a big win over the weekend. Finally, the Armed Forces have seen drastic funding cuts to their acclaimed sporting programs. Enjoy your read!

Flamengo cause outrage in anniversary of youth team tragedy

Rio de Janeiro football club Flamengo had an illustrious 2019, winning the Brazilian league, the Copa Libertadores, and pushing Liverpool all the way to extra time in the final of the World Club Cup. However, an indelible stain on an otherwise glorious 12 months came last February, when a fire broke out at the lodgings of their youth team training facility, killing ten teenage boys.

The club has hardly shrouded itself in honor and humility since the tragedy, for which Flamengo is being held criminally liable due to the extremely precarious nature of the lodging facilities. Beyond delays in paying compensation to the victims’ families, recurring appeals in courts to attempt to reduce their punishment, all the while “dedicating” their on-field successes to the ten dead teenagers, the public image of Flamengo directors hit rock bottom this past weekend, on the one-year anniversary of the fire.

Turned away. On Saturday, when a memorial service was scheduled to remember the lives of the ten victims of the youth team lodging fire, Flamengo did not allow the victims’ families to enter the training complex, turning them away at the gates under the scorching afternoon sun in Rio de Janeiro.

Compensation. Flamengo is currently paying monthly compensation of BRL 10,000 to each of the families of the ten victims, but the club is appealing this punishment in court, claiming it is excessive.

Brazil’s boys on the way to Tokyo

With a thumping 3-0 win over Argentina in the South American Championships, Brazil’s under 23 football side has guaranteed its place in the Olympic Games in Tokyo later this year. The road was bumpier than Brazil would have liked, having been held to draws against Uruguay and Colombia, but the youngsters came through when it mattered most, giving them an opportunity to defend the gold medal they won in Rio de Janeiro.

The Pre-Olympics. For the first time in over a decade, South America’s representatives in the Olympic football tournament were decided this year in an under 23 competition, held in Colombia. In previous years, the qualification was determined as part of the South American Youth Championships, which is an under 20s tournament that also decides entry to the U20 World Cup. This was a welcome change, with a higher level of football on display, and it is likely that many of the squad in Colombia will go on to represent Brazil in Tokyo, barring a few high-profile absences who would have been eligible, such as Gabriel Jesus, Vinicius Júnior, and Rodrygo.

Wealth of talent. Coinciding with the winter transfer window for European clubs, this under 23 tournament served as a huge shop window for Brazil’s squad. While much of the cream of this generation has already been skimmed at an earlier age—as was the case with the aforementioned Vinicius Júnior and Rodrygo—a number of star performers were rewarded for their showings with big money moves to Europe. Here are some of this year’s standouts:

Matheus Cunha. Already a multimillion-euro player, having joined his previous club RB Leipzig for EUR 15 million in 2018, 20-year-old forward Matheus Cunha was snapped up by Hertha Berlin during Olympic qualifying for a cool EUR 18 million fee. Ending the tournament as top scorer with five goals, Cunha has shown himself to be a deadly striker with good instinct and balance, certainly one to keep a watchful eye on in the Bundesliga.

Pedrinho. Bursting onto the scene in 2017, the tricky left-footed winger didn’t have things all his own way in the under 23s tournament, forced to play through the middle to accomodate his equally tricky teammates Antony and Paulinho. He got his way against Argentina, however, starting on the wing and laying on a host of chances for Matheus Cunha to tuck away. Though still under contract at São Paulo side Corinthians, he has recently agreed a EUR 20 million deal to join Portuguese giants Benfica in June.

Bruno Guimarães. Alongside Grêmio’s Matheus Henrique, he made up Brazil’s energetic and skillful midfield pairing and put on some excellent displays throughout the tournament in Colombia. Linking up superbly with his team-mates all over the pitch, Bruno Guimarães has an excellent range of passing which allows him to simultaneously keep the team ticking over while always possessing the threat of a cutting through ball to spring attacking moves. French side Lyon won the race to the tall 20-year-old’s signature, snapping him up for EUR 20 million. He may well need to ramp up his physical development for the European game, but he is a joy to watch and will be hoping to make a big impact.

The Brazilian government has decided to cut the budget for the country’s military athletes by 94 percent, giving the lowest amount of investment since the launch of the successful Armes Forces High-Performance Athletes Program in 2008. According to the Defense Ministry, the first budget overseen by President Jair Bolsonaro has allocated just BRL 600,000 to the program for this year, down from BRL 10 million last year.

Military athletes. With little attention paid to Olympic sports in Brazil, the main source of training and funding for these sports comes from the Armed Forces. The High-Performance Athletes Program provides a salary for athletes of a wide range of Olympic sports, providing they enlist in the Army, Navy, or Air Force.

Results. In 2016, close to one-third of the entire Brazilian Olympic team came from the Armed Forces. Of Brazil’s 19 medals in Rio, 13 were won by military athletes. The High-Performance Athlete program had 630 sportsmen and women in 2018, but that number fell to 534 last year and is expected to drop further.

Olympics? Cuts to the program in Olympic years are normal, but have never been this drastic. The Armed Forces do not need to pay for their athletes to travel to the Olympic Games, as this is covered by the Brazilian Olympic Committee. In 2016, with Brazil hosting the Olympics, the program saw budget cuts of 65 percent, but still remained with a yearly investment of BRL 3.3 million.

Copa Libertadores. In the qualifying rounds of South America’s biggest continental club competition, Brazilian sides got off to a mixed start. Corinthians lost 1-0 away to Paraguayan side Guaraní, five years after the two sides met in the Libertadores last 16—Guaraní won that tie, too. Internacional drew 0-0 away from home to Universidad de Chile, in a game that saw the host’s fans clash with the police and set fire to their own stadium.

Women’s football. The favorites got off to strong starts in the opening round of the Brazilian championship on the weekend. Corinthians bested their rivals Palmeiras 3-1 away from home, while Santos and current champions Ferroviária strolled to 4-0 home wins against Flamengo and Audax, respectively. Two big matches are scheduled for Thursday, with Corinthians hosting Kindermann and Santos going away to Iranduba.

Olympic volleyball. Both Brazil’s men’s and women’s teams found out their opponents for the Tokyo Olympics later this year. The men were drawn into a difficult group alongside the USA, Russia, Argentina, France—ranked 3rd to 6th in the world, respectively—and Tunisia. The women’s team will have an easier route to the final phase, avoiding big hitters China and the USA and taking on hosts Japan.

Olympic basketball. For the first time since 1992, Brazil’s women’s side has missed out on qualification for the Olympic Games. In the pre-Olympic tournament in Bourges, France, Brazil lost to Puerto Rico, France, and Australia. The last qualifying spots up for grabs for the men’s tournament will only be decided in June.

Data breach. Brazilian cybersecurity news website The Hack managed to gain access to the personal data of tens of thousands of registered supporters of São Paulo-based football club Palmeiras, thanks to an unprotected server on ticketing website FutebolCard. Hackers extracted some 25 GB of data from the website, which included information on members of Botafogo and Sport Recife, but the lion’s share of the data dump concerned Palmeiras fans. A new data privacy law will come into force in Brazil in the near future, which would leave companies criminally responsible for allowing such breaches to take place.