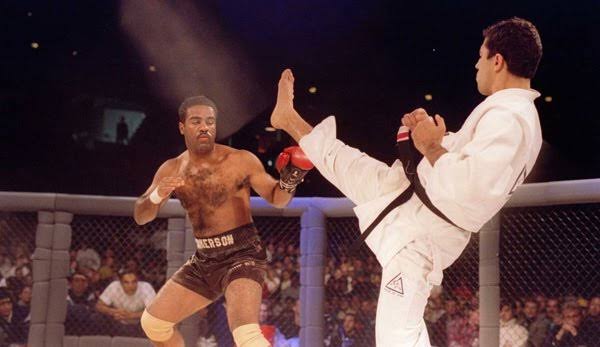 Good morning and welcome back to the Brazil Sports newsletter. On this week’s edition: the birth of the UFC and the strange process of creating a brand-new sport. Plus, Palmeiras: champions last year, crisis this year. What went wrong? Happy reading!

The birth of the UFC

The idea of a “new sport” is something that sounds strange to the ear. The sports we know and love are often well over a hundred years old, so the thought of creating something new seems confusing and frankly unlikely. However, martial arts fans were faced with this situation back in 1993, and the inaugural edition of the Ultimate Fighting Championship, or UFC.

Why it matters. UFC 1 turned 26 years old last month, and in the years that followed the groundbreaking event, the sport of “mixed martial arts,” or MMA, became a household name and a multi-billion-dollar enterprise, led by the UFC franchise.

Which is best? While there are still many who turn their noses up at MMA, for what they see as an over violent and exploitative industry, the simple conception of the sport is a fascinating story, based on answering the question: which martial art is best? The idea of the Ultimate Fighting Championship was to gather fighters from a number of different disciplines, with vastly different skillsets and techniques, to see who would come out on top.

This ultimate question was put to the test in the very first fight of UFC 1. Tall, lean Dutch fighter Gerard Gordeau—a specialist in savate boxing—faced giant American sumo wrestler Teila Tuli. The announcers were not envious of Gordeau’s position, having to face someone “of Tuli’s size.” But the fight was over in 26 seconds. Tuli charged to try and take down his opponent, who easily dodged his advance and delivered a knockout roundhouse kick to the sumo specialist’s face. The kick knocked out three of Tuli’s teeth, two of which were reportedly left lodged in Gordeau’s foot.

Brazilian jiu-jitsu above all. As the bracket progressed, a clear pattern emerged. Fighters based on power and striking were left behind by quicker competitors focusing more on grappling and submissions. Brazil’s Royce Gracie, one of the pioneers of Brazilian jiu-jitsu, was the ultimate champion, defeating Gordeau in the final with a rear-naked choke. The final was not without controversy, as Gordeau broke one of the only three rules of the UFC by biting Gracie earlier in the bout—the other two rules outlawed eye gouging and groin shots. As “revenge” Gracie held onto his tournament-winning rear-naked choke for a good few seconds after the fight had already been concluded, posing a serious risk to his opponent.

The evolution of the UFC. The story goes that the inaugural Ultimate Fighting Championship was only ever intended to be a one-off event. However, its success was such that more pay-per-views were scheduled, and the fighters began to develop their own particular styles. Instead of the “wrestler v. boxer” matchups of the early events, competitors began incorporating a number of different martial arts, leading to the de facto “creation” of MMA as its own sport.

From triumph to turmoil: what has happened to Palmeiras?

Twelve months ago, major São Paulo football club Palmeiras were only a matter of days away from winning their tenth Brazilian championship trophy, a triumph they would eventually seal with a win against Vasco da Gama on the second-last round of the season. Pundits mused about the possibility of Palmeiras becoming the new hegemonic force in Brazilian football, something the club hadn’t seen since the early 1990s.

Why it matters. Today, Palmeiras fans wake up without a coach, a director of football, or any trophies in 2019. The walls of its stadium are stained with the graffiti of protesting fans. A 3-1 home defeat to newly crowned champions Flamengo saw manager Mano Menezes and director of football Alexandre Mattos hand in their resignations, leaving the club in third place. Coincidentally, Menezes was brought in as coach after Palmeiras lost 3-0 to Flamengo in September this year.

Where did it go wrong? In immediate terms, Palmeiras missed an opportunity to properly strengthen at the beginning of 2019. The club won the 2018 championship with a strong and record-breaking run-in but faced no strong competitors on their way to the title. As rivals Flamengo and Santos improved, Palmeiras stalled. The tactical approach of former manager Luiz Felipe Scolari—direct and percentage-based play in possession, man-marking in defense—is only viable up to a point and is easily defeated by accomplished opponents.

Unsustainable. However, when taking a slightly broader look at Palmeiras since the appointment of Alexandre Mattos as director of football in 2015, bigger problems emerge. Mattos was an important element in giving the club clout on the transfer market. In his first year, when nippy winger Dudu was on the market and seemed set to sign for Corinthians or São Paulo, Mattos’ negotiation skills managed to bring the player to Palmeiras in what was a significant coup at the time.

However, these success stories have been relatively scarce, and the club’s transfer policy has adopted more of a scattergun approach, signing everyone and anyone, often for hefty sums of cash. A staggering 70 players have been signed since Mattos’ arrival, highlighting that their scouting system doesn’t exactly have the best filters in place. For every Dudu, there has been a Miguel Borja, a Deyverson, a Carlos Eduardo, and an Arthur Cabral—players who have never managed to properly fit into the squad.

What’s in store for 2020? At this early stage of the club’s rebuild, the priority is to bring in Argentinian coach Jorge Sampaoli, currently at rivals Santos. The chances of Sampaoli cutting his contract short are high, after a series of disagreements with Santos president José Carlos Peres. Paulo Autuori, who left a director of football role at Santos earlier this year, is also on Palmeiras’ wish list. From a fan’s point of view, the bottom line is clear: Palmeiras must compete with Flamengo and win titles, by any means necessary. The squad is expected to undergo a significant reshuffle, and the hiring policy of the new director of football will be crucial. 17-year-old Gabriel Veron, the best player at the U17 World Cup, is expected to be blooded throughout 2020, and fans will hope he will not be the only youth player to make his way into the squad.

Goiás’ 22-year-old forward Michael has been one of the breakout stars of this year’s Brazilian championship, and he capped off a superb year with an equally superb goals midweek. Away to Internacional, Michael picked up the ball on the halfway line during a Goiás counterattack. With excellent direct running, intuitive close dribbling and tricky changes of direction, he turned two defenders inside and out before finishing well. He is set to be in huge demand from the country’s biggest clubs come the off-season.

Neymar tax bill. A federal judge decided this week that Paris Saint-Germain star Neymar must pay a fine of BRL 88 million to the tax authorities, in relation to his family’s receipt of EUR 40 million between 2011 and 2013, when the player signed for Barcelona from his boyhood club Santos. The figure decided upon on Wednesday is a drastic reduction from the tax authorities’ initial claim for BRL 188 million—however, Neymar’s lawyers only admit paying a debt of BRL 8.7 million.

Attendances. With one more home game left in the league, Flamengo has broken the record for average attendance by one club in a single season. The champions have attracted an impressive 58,740 people per game this year on their way to the title. In comparison, only eight European clubs—Borussia Dortmund, Bayern Munich, Real Madrid, Barcelona, Manchester United, Arsenal, Schalke and Celtic—managed to bring in more fans in the 2018–2019 season. Flamengo broke the record they set themselves, last season, with 51,224.

Promoted clubs. Brazil’s second division came to an end this weekend, and the four sides making their Série A returns in 2020 have been confirmed. The first promoted club is Bragantino, from the tiny city of Bragança Paulista in the countryside of São Paulo state. Bragantino are returning to the top table for the first time since 1998, a decade in which they reached the Brazilian championship final of 1991. Their recent return has been bankrolled by their merging with Red Bull, of which we will discuss in further issues. Sport, from the northeastern city of Recife, have also made it back to the first division after relegation last year. Coritiba and Atlético-GO are also on their way back.

Ricardo Teixeira. The former president of the Brazilian Football Confederation (CBF), Mr. Teixeira has been banned for life from any football-related activity by Fifa, picking up a CHF 1-million (BRL 4.25 million) fine to boot. The decision came as a result of a Fifa Ethics Committee investigation into corruption linked to TV broadcasting deals, an offshoot of the Fifagate scandal led by U.S. federal prosecutors and the FBI. Mr. Teixeira oversaw two World Cup wins for the Brazilian national team (1994 and 2002), but his successes were vastly outnumbered by scandals.

Bruno gets another club, nine years after brutal murder