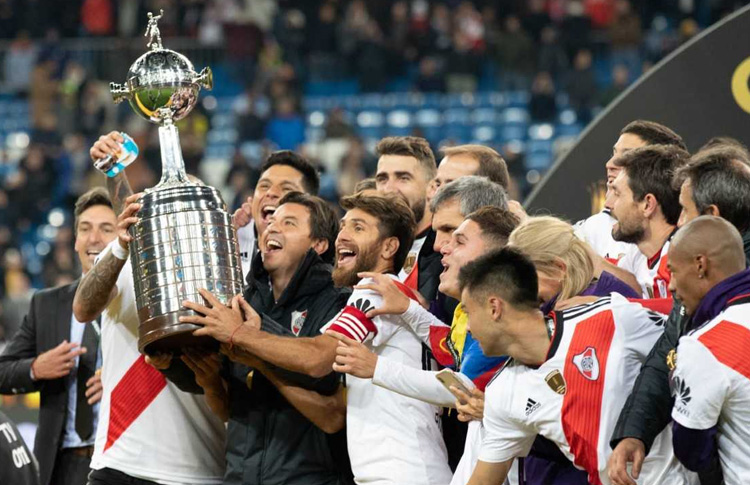 Good morning and welcome back to the Brazil Sports newsletter. This week, we’re taking a look at the future of the Copa Libertadores, South America’s biggest club competition. Should it turn more to Europe? Or should it double down on its roots? This year’s final will be a crucial yardstick. Plus, we take a look at foreign managers in the Brazilian game, with Flamengo’s Jorge Jesus setting a trend for the rest of the league. Happy reading!

Could the Copa Libertadores go global?

The Copa Libertadores is the most important trophy in South America. Billed as the continent’s Champions League, it has always been a unique, gritty and unpredictable tournament that bears little to no resemblance with Europe’s standardized corporate hospitality-a-thon.

Why it matters. Decades of reckless organization and poor marketing have left the Libertadores at a crossroads: the quality gap with European football gets wider every year, and the World Club Cup (still the ultimate goal in South America) is becoming less and less relevant every year. It has become abundantly clear that the tournament needs a kick up the backside, but which direction will the Libertadores take from here on out?

One leg good, two legs bad? The leading trend at the moment is to make the Copa Libertadores more and more like the Champions League. The first major step in this direction has been to do away with the tournament’s traditional two-legged finals, replacing them for a one-off showcase match at a neutral venue. This year, the big game will take place in Santiago, and the tournament organizers have recently announced that the Maracanã stadium in Rio de Janeiro will be the stage for next year’s decider.

It remains to be seen just how well a one-legged final will work in South America, however. Firstly, home and away games make a lot more sense in the continent. Distances are longer, the culture of fans traveling abroad to watch their teams is less strong, and home advantage is more pronounced.

As a hypothetical, were 2017’s final between Atlético Nacional and Independiente del Valle to have taken place in a one-off game in Brasília, there is a good chance that the 70,000 seater stadium would be left largely empty. Having a South American final in a small neighborhood ground—as was the case in 2018, when Lanús hosted Grêmio in their cramped La Fortaleza stadium in Buenos Aires—is arguably part of the charm.

The Almighty Dollar. Another idea being floated is to expand the Copa Libertadores beyond the Darién Gap and include North and Central American clubs. There is some precedent for this, with Mexican clubs being a part of the Libertadores between 1998 and 2016. The dream of South America’s football executives is to get Major League Soccer clubs from the U.S. and Canada to join, bringing in the dollars that would come with such a move.

A matter of distance. While this might sound like a gimmie, there are logistical factors to bear in mind. When Mexican sides were involved in the Copa Libertadores, only one team from the country’s northwest (Club Tijuana) ever qualified for the tournament. São Paulo is almost 10,000 kilometers from Tijuana—the equivalent of traveling from London to Tokyo. What if the Vancouver Whitecaps were to be drawn against Corinthians in the group stage? How could teams be expected to travel almost 12,000 km in midweek and still play their domestic games at the weekend?

The Shame Game. Last year’s final was a huge chance for South America to get it right. For the first time, historic rivals River Plate and Boca Juniors qualified for the final in the same year, and the world was all set to enjoy the Superclásico to end all Superclásicos. A thrilling first leg had the scores poised at 2-2 going into the decider at the Monumental in Buenos Aires, but fan violence before the game saw the final postponed, only to be played one month later, in the Santiago Bernabéu in Madrid. The tournament literally named after those who liberated South America from Spanish and Portuguese rule was having its final played in the colonizers’ back yard. The final of the century became a joke.

Identity crisis. The Copa Libertadores is at a crossroads. The joy that comes from watching a classic Libertadores game—with the chance of dogs on the pitch, a few full-time fisticuffs, and some sneaky power cuts whenever the home side is in danger of losing—is spoiled by the events we saw in last year’s final. The quality isn’t there, and even the gritty tradition of the tournament is becoming something more and more toxic. Something must change, and the next few years of the Copa Libertadores will give a crucial hint as to where this folkloric competition will go next.

Foreign coaches are all the rage

Last week, we talked about the lack of foreign players in Brazilian domestic football. Now, we turn our attention to foreign managers, who are just as rare. The ones who are here, however, are doing a pretty excellent job. Portuguese boss Jorge Jesus has received much of the plaudits for Flamengo’s success this season, while Santos have become a fascinating prospect under Argentinian Jorge Sampaoli.

Why it matters. Imitation is the sincerest form of flattery, and these two cases of success appear to have kicked of a trend in Brazilian football. Internacional, after sacking their coach Odair Hellmann earlier this month, are trying to bring in Argentinian boss Eduardo Coudet for the 2020 season. Over at Corinthians, the word is that manager Fábio Carille is on his way out, and that the club is in talks with Monaco’s Portuguese coach Leonardo Jardim.

Case studies. Brazilian football has had plenty of foreign coaches dotted around here and there, to varying levels of success. On the one hand, we have Diego Aguirre, the former Uruguay striker who adapted reasonably well to the Brazilian game, with some reasonable seasons in charge of Internacional, Atlético-MG and São Paulo. On the other, there were the flying visits of Ricardo Gareca and Paulo Bento at Palmeiras and Cruzeiro, respectively. Each lasted no more than three months in Brazil.

Matthäus. Before foreign coaches in Brazil were cool, former Germany captain Lothar Matthäus was a surprise pick as the new Athletico Paranaense manager back in 2006. After going his first seven games unbeaten, Matthäus disappeared, turning up in Germany to “resolve family issues.” Two weeks later, he sent in his resignation by fax. In a statement, Athletico complained that the German coach had left the club an international phone bill totaling some BRL 13,000.

Seleção. Notably, Brazil’s national team has never had a foreign coach, and those in charge of the sport in the country have shown themselves to be adamantly against the idea. In 2012, after Mano Menezes was sacked as Brazil coach, with less than two years to go before the World Cup on home soil, the Brazilian sports press launched a campaign to bring in Spain’s Pep Guardiola as the new national team boss.

Dani Alves said that the ex-Barcelona coach wanted the job, but that the Brazilian Football Confederation (CBF) didn’t want him. “He already had his team in mind,” the right-back claimed. The CBF went for Luiz Felipe Scolari instead, and we all remember how the 2014 World Cup ended.

Parallel universe. Things could have been oh-so-different, however. In 1958, during preparations for the World Cup of that year, the best coach in Brazil was actually a Paraguayan: Flamengo boss Fleitas Solich. In the lead-up to the tournament, CBF head João Havelange wanted Solich to manage Brazil, and there was no outcry about his Paraguayan nationality. However, due to the need to form a good relationship with the football federation of São Paulo, Havelange ended up choosing homegrown Vicente Feola, and Brazil won their first-ever World Cup. One wonders how the history of Brazilian football would have played out had Solich been in charge.

We have a ‘Brazilians Abroad’ edition of Goal of the Week, congratulating 27-year-old Bernard for a wonderful piece of skill in Everton’s 2-0 win over West Ham. After having a smart cross-field run picked out by a disguised reverse pass, the pint-sized winger preceded to turn his defenders inside out before stabbing the ball past the keeper and into the net.

Série A. When we reach the last few months of the Brazilian championship, the sports press roll out their house mathematician Tristão Garcia to calculate the probabilities of the final league standings. After Palmeiras’ 1-1 draw away to Athletico on Sunday, Tristão put Flamengo’s title chances at an incredible 97 percent. With 11 games to go and 10 points separating the two, I’m not sure how his formula works, but who am I to argue with the experts.

Bahia. Fast becoming everyone’s second team, Bahia will take to the field for their league game against Ceará tonight with an oil-stained shirt, in reference to the crude oil staining Brazil’s Northeast coast, currently being cleaned up, by hand, by the local people. The shirts used in tonight’s match will be auctioned off, with the proceeds going to these groups of volunteers.

Petrobras. A few weeks ago, we wrote about the lack of any Brazilian drivers in Formula 1, despite the country’s great tradition of champion drivers. Now, it seems that Formula 1 will lose all trace of Brazil as the Jair Bolsonaro government has canceled Petrobras’ BRL 872 million contract with McLaren to provide fuel, lubricant, and sponsorship.

The VAR bill. In what sounds like a dream of all the VAR-skeptics out there, Rio de Janeiro City Councilor Antônio José Papera de Azevedo (nicknamed Zico) filed a bill to prohibit the use of video referees in the city, under penalty of a BRL 250,000 fine. The proposal is unlikely to get off the ground, but, Zico, it was worth a try.

Refugees’ Cup. DR Congo defeated reigning champions Niger to win the São Paulo edition of the 2019 Refugees’ Cup, an annual event held between football teams made up of displaced people in Brazil. Organized by NGO África do Coração, the tournament involves teams from Africa, Asia, and Central America. In the final, played at the iconic municipal Pacaembu stadium, DR Congo came out 2-0 victors against last year’s champions Niger.

Surfing. After a win in the Peniche leg of the World Surf League, Brazil’s Tatiana Weston-Webb has become the country’s first surfer to qualify for the Olympics. Tatiana overcame her Hawaiian opponent Coco Ho, guaranteeing her a high-enough ranking position to go to next year’s Games in Tokyo, where surfing will make its debut as an Olympic sport. In the men’s sport, things are very tight indeed. Gabriel Medina, Filipe Toledo, and Ítalo Machado are battling it out for two Olympic spots.

Everything you need to know about the Copa America

A muted opening for the Copa America