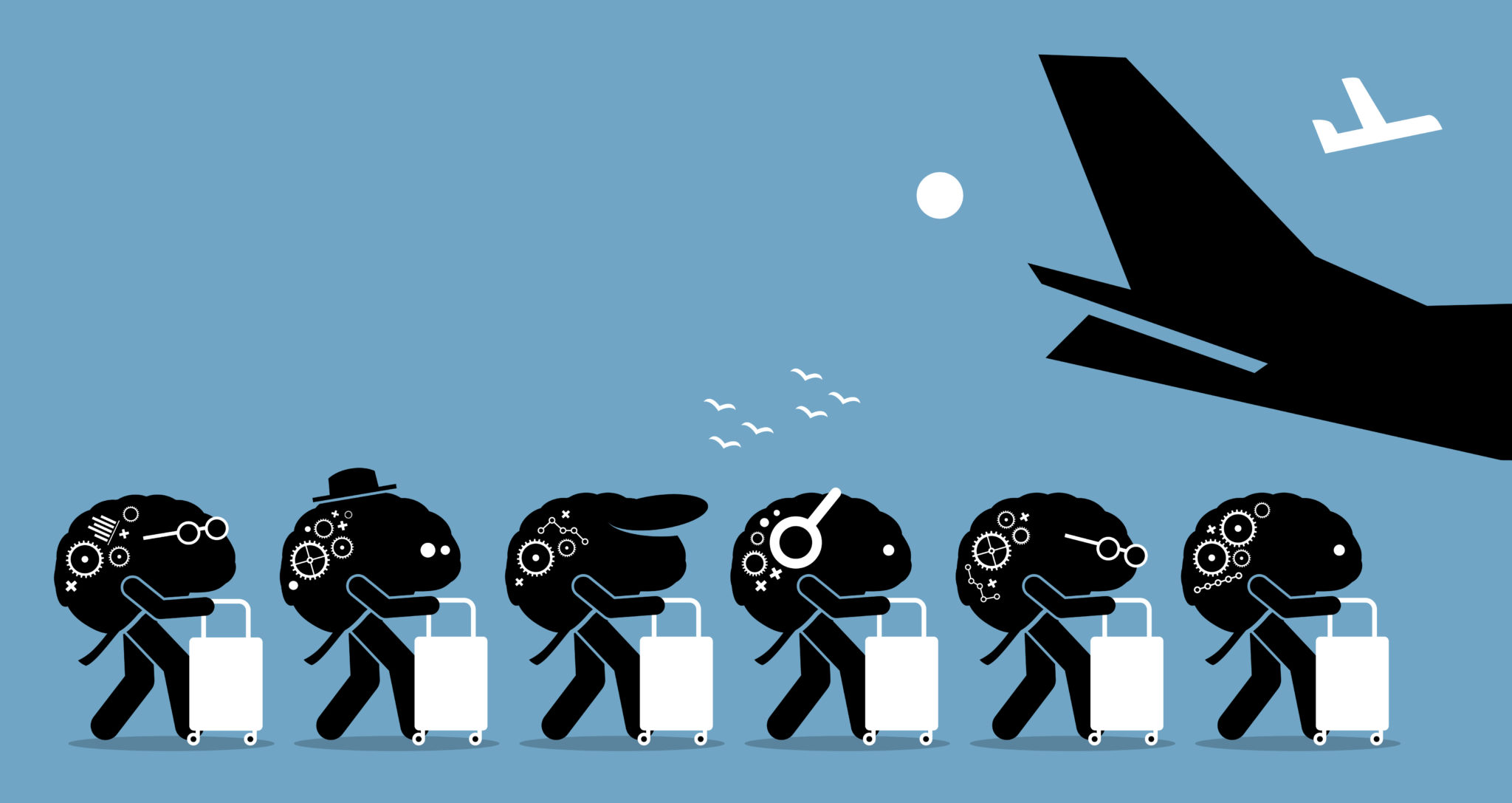 The most devastating effects of the economic crisis in Brazil were felt on the country’s job market, which remains with an unemployment rate of 12 percent, according to a recent study from the International Labor Organization—this in spite of 11 consecutive quarters of positive economic growth. Beyond the obvious consequences of increasing poverty and inequality, the lack of opportunities for young people creates a deep impact on the country’s future, as promising talents flee the country (in what is known as “brain drain”), seeking a better life and career prospects.

</p> <p>Of 132 countries, Brazil ranks 80th in its ability to attract, retain, and train talented professionals in the age of artificial intelligence. These were the findings of the latest Global Talent Competitiveness Index, a yearly <a href="https://finance.yahoo.com/news/2020-global-talent-competitiveness-index-084000347.html">study</a> carried out by Insead, the Adecco Group, and Google.</p> <p>When it comes down to purely attracting talents, Brazil falls even further to 96th place, behind Kyrgyzstan, Eswatini, and Nicaragua.</p> <hr class="wp-block-separator"/> <figure class="wp-block-image"><img src="https://brazilian.report/wp-content/uploads/2020/01/brain-drain-graphs-1024x720.png" alt="brain drain graphs" class="wp-image-30947" srcset="https://brazilian.report/wp-content/uploads/2020/01/brain-drain-graphs-1024x720.png 1024w, https://brazilian.report/wp-content/uploads/2020/01/brain-drain-graphs-300x211.png 300w, https://brazilian.report/wp-content/uploads/2020/01/brain-drain-graphs-768x540.png 768w, https://brazilian.report/wp-content/uploads/2020/01/brain-drain-graphs-610x429.png 610w, https://brazilian.report/wp-content/uploads/2020/01/brain-drain-graphs.png 1468w" sizes="(max-width: 1024px) 100vw, 1024px" /></figure> <hr class="wp-block-separator"/> <p>According to <a href="https://agenciadenoticias.ibge.gov.br/agencia-noticias/2012-agencia-de-noticias/noticias/25801-nem-nem">IBGE data</a>, 23 percent of Brazilians aged 15 to 29 years old are neither in work nor study. Meanwhile, the youth unemployment rate <a href="https://www.poder360.com.br/economia/desemprego-entre-os-jovens-fica-em-258-no-2o-tri-mais-que-o-dobro-do-geral/">reached 25 percent</a> in the first half of last year, versus the overall average of 12 percent at the time. Despite better economic perspectives, analysts heard by newspaper <em>Valor </em>believe unemployment <a href="https://valor.globo.com/brasil/noticia/2019/12/19/cenario-deve-combinar-mais-vagas-formais-e-queda-lenta-do-desemprego.ghtml">won’t go down to single-digit levels until 2021</a>. The International Labor Organization is even more pessimistic, saying that even in 2025, Brazil is likely still to have <a href="https://valor.globo.com/mundo/noticia/2020/01/20/brasil-tera-12-milhoes-de-desempregados-por-cinco-anos-diz-oit.ghtml">12 million people out of work</a>.</p> <p>This grim job market scenario is considered one of the main reasons Brazilians are looking for opportunities abroad. According to data obtained by <strong>The Brazilian Report</strong> from the Federal Revenue Service, 22,327 Brazilians informed they were leaving the country definitively between January and October of last year—in 2015, it was less than 15,000.</p> <p>It is worth mentioning that these are only the individuals who formally reported their migration to the tax authorities; the absolute number of people who moved from Brazil is much higher.</p> <p>As 25-year-old engineer Naira Maia told <strong>The Brazilian Report,</strong> the fear of being unemployed after graduating was the main reason that drew her interest in moving to Canada, a destination that is growing in Brazilians&#8217; estimations. Ms. Maia is currently studying Architectural Technology at the Northern Alberta Institute of Technology.&nbsp;</p> <p>“I started to think about leaving Brazil during my fourth year at university. I spent a whole year looking for internships, no one would hire me. I got desperate because, in the fifth year, people only hire those who have previous intern experience. That’s when I started to consider leaving the country,” she said, adding that she intends to remain in Canada after graduating in 2021.&nbsp;</p> <h2>Brain drain: Changes in profile </h2> <p>For professor Newton Campos, Brazil manager of Spanish institution IE Business School, economic struggles along with the increased access to information provided by the internet forged a change in the demographics of Brazilian students going abroad.&nbsp;</p> <p>“We have noticed an increasing interest in studying abroad and mostly by younger audiences, the undergraduates,” he told <strong>The Brazilian Report</strong>. “Then there are also youngsters aged 25 to 35 years old, who want to improve their English skills. These are highly educated people, coming from the best schools and universities.”</p> <p>According to him, the recruitment of Brazilians has been increasing by 20 percent each year since 2016. He has also noticed an important change: many of the students do not want to return to Brazil.&nbsp;</p> <p>“I’ve been hearing more frequently that the students don’t want to come back. I’m sad as a Brazilian because these are people who lost their hope in the country.”&nbsp;</p> <p>Besides skilled students, a report by newspaper <em>Valor Econômico</em> also shows a flight of high-income professionals to the U.S. <a href="https://valor.globo.com/brasil/noticia/2019/12/16/novo-folego-da-fuga-de-cerebros-do-pais-acende-sinal-de-alerta.ghtml">According to the report</a>, the issuance of EB-2 visas—for skilled professionals—to Brazilians amounted to 192 between January and October last year, as opposed to 44 in the whole of 2018.&nbsp;</p> <p>There was even a 58 percent increase in the concession of the highly expensive EB-5 visa for Brazilian investors, ahead of the increase of the minimum investment threshold from USD 500,000 to USD 900,000 in November. A similar move is also occurring in Portugal, as we reported in our <a href="https://brazilian.report/money/2019/05/27/rich-brazilians-portugal-investment/">May 27 story</a>.