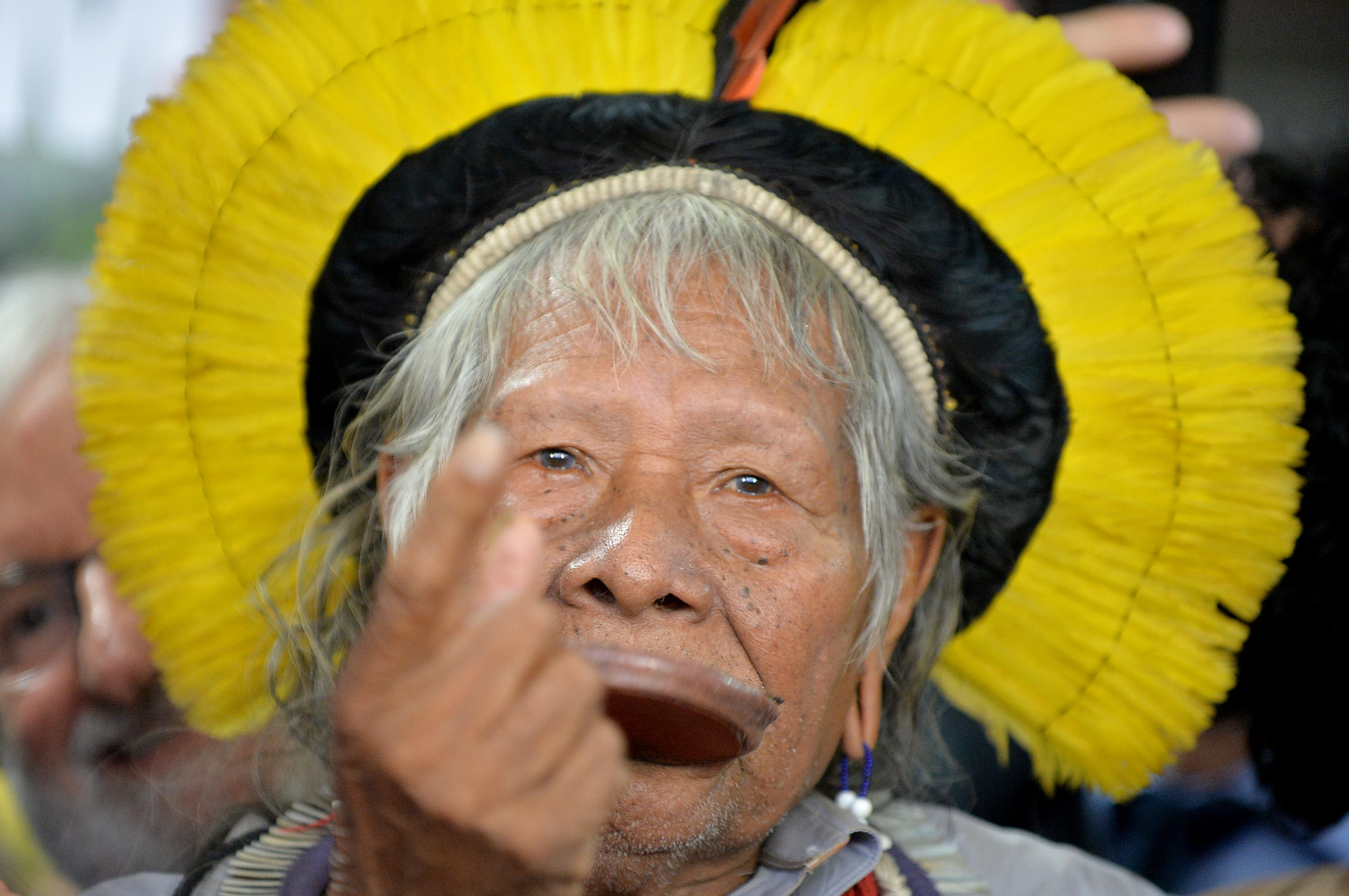 For non-Brazilian observers of President Jair Bolsonaro’s speech at the UN General Assembly last week, one name—crowbarred in among a long list of diatribes—might not have come as terribly familiar: Raoni Metuktire, an indigenous chief, who is the leader of the Kayapó people.

At 89 years old, Raoni, with his unmistakably large lip plate, is a bonafide defender of the Amazon rainforest—and arguably the most famous spokesperson for the indigenous cause internationally.

This year alone, he met with <a href="https://brazilian.report/newsletters/daily-briefing/2019/08/28/brazil-france-relations-macron-bolsonaro-car-wash/">French President Emmanuel Macron</a> and Pope Francis—to whom he denounced the environmental policies being carried out by the Jair Bolsonaro administration. His name was recently put forward by Brazilian anthropologists and environmentalists as a candidate for the 2020 Nobel Peace Prize for his lifetime work.</p> <p>For President Jair Bolsonaro, though, Raoni is little more than a &#8220;pawn&#8221; for international organizations. In his speech before the UN, Mr. Bolsonaro said Raoni and other leaders are &#8220;used by foreign governments in their informational warfare to advance their interests in the Amazon.&#8221; He also said Raoni &#8220;does not speak for all indigenous people,&#8221; blamed indigenous groups for <a href="https://brazilian.report/power/2019/08/21/amazon-rainforest-slowly-dying-images/">Amazon fires</a>, and promised to open the floodgates for mining activities in the rainforest.</p> <hr class="wp-block-separator"/> <script src="https://www.buzzsprout.com/299876/1766182-79-bolsonaro-flips-off-the-world.js?player=small" type="text/javascript" charset="utf-8"></script> <hr class="wp-block-separator"/> <h2>Who is Raoni Metuktire?</h2> <p>Raoni was born in 1930, in the <a href="https://brazilian.report/money/2019/09/05/state-finances-biggest-risk-brazilian-economy/">state</a> of Mato Grosso. He learned to speak Portuguese at the age of 24, after meeting with soon-to-be <a href="https://brazilian.report/guide-to-brazil/2018/04/21/brasilia-brazil-planned-capital/">President Juscelino Kubitschek</a>. Ten years later, he met the King of Belgium, Leopold III, who was on a hunting trip to Mato Grosso.</p> <p>After over 30 years of activism work to protect the Amazon rainforest, Raoni gained international prominence in 1987 when he met with British singer Sting on a tour promoted by Amnesty International in favor of the demarcation of indigenous lands in Brazil.</p> <p>Two years later—and always with his trademark lip plate, yellow feather hat, and earrings—Raoni accompanies Sting to 16 countries, campaigning for the creation of the National Park of the <a href="https://brazilian.report/society/2019/08/03/amazonian-town-altamira-brazil-murder-capital/">Xingu River</a>, a 180,000-square-kilometer area between the states of Mato Grosso and Pará. The reserve was approved in 1993.</p> <hr class="wp-block-separator"/> <div id="buzzsprout-player-1548880"></div> <script src="https://www.buzzsprout.com/299876/1548880-73-is-brazil-capable-of-protecting-the-amazon-on-its-own.js?container_id=buzzsprout-player-1548880&#038;player=small" type="text/javascript" charset="utf-8"></script> <hr class="wp-block-separator"/> <p>The success of many of his claims was boosted by the international allies he managed to make. From former French President François Mitterand to the late Pope John Paul II, Raoni rallied the international community around his cause.&#8221;I personally don&#8217;t feel that [Raoni&#8217;s] nomination [for the Nobel Peace Prize] is just to oppose Mr. Bolsonaro. At least that&#8217;s not why I support it. We are in a very important moment, and it would be good to obtain some respect from Europe—embodied in the figure of Chief Raoni,&#8221; said Sydney Possuelo, a former head of Brazil&#8217;s agency for indigenous affairs, to <em>Agência Pública</em>.</p> <h2>Does Raoni really stand a chance for the Nobel Prize?</h2> <p>If he were to win the award, Chief Raoni would be the <a href="https://brazilian.report/society/2019/03/07/brazil-nobel-prize-laureate/">first Brazilian ever to win a Nobel prize</a>. He is set to face enormous competition (each year, the number of candidates can reach 300), but in a world where climate change seems to be at the core of the world&#8217;s worries and atop the international agenda, his claim could gain momentum and crown a life dedicated to the cause.</p> <p>But his odds highly depend on this year&#8217;s winners. According to sources from Stockholm cited by <em>Valor</em>, if another environmental activist is awarded the prize in 2019 (the announcement will be made on December 10), then his chances would be dramatically hampered.</p> <p>His main &#8220;competitor&#8221; is 16-year-old Swedish activist <a href="https://www.nytimes.com/2019/08/02/opinion/climate-change-greta-thunberg.html">Greta Thunberg</a>, who has led waves of international youth-led strikes to raise awareness for the environmental cause. She recently spoke at the World Economic Forum in Switzerland, to the U.S. Congress, and at the UN General Assembly. &#8220;I shouldn&#8217;t be up here. I should be back at school on the other side of the ocean,&#8221; the teen told the UN Climate Action Summit. &#8220;Yet you all come to us young people for hope. How dare you! You have stolen my dreams and my childhood with your empty words.&#8221;</p> <div class="flourish-embed flourish-map" data-src="visualisation/692125"></div><script src="https://public.flourish.studio/resources/embed.js"></script> <p>Environmental activists have been awarded the Nobel Peace Prize in the past. In 2007, the Intergovernmental Panel on Climate Change and former U.S. Vice President Al Gore won for their efforts in <a href="https://www.nobelprize.org/prizes/peace/2007/gore/facts/">raising awareness</a> about man-made climate change. In 1992, the prize was given to Guatemalan indigenous leader Rigoberta Munché Tum.&nbsp;</p> <p>Working in Raoni&#8217;s favor, however, is Jair Bolsonaro&#8217;s vitriol. By questioning the chief&#8217;s legitimacy, the Brazilian president—who has become something of an international bogeyman on climate issues—might actually reinforce the claim in his favor.</p> <p>We will know more in February, when the Nobel committee releases its shortlist of candidates for the prize.

Why has no Brazilian ever won the Nobel Prize?

The indigenous ‘guardians’ giving their lives for their ancestral lands