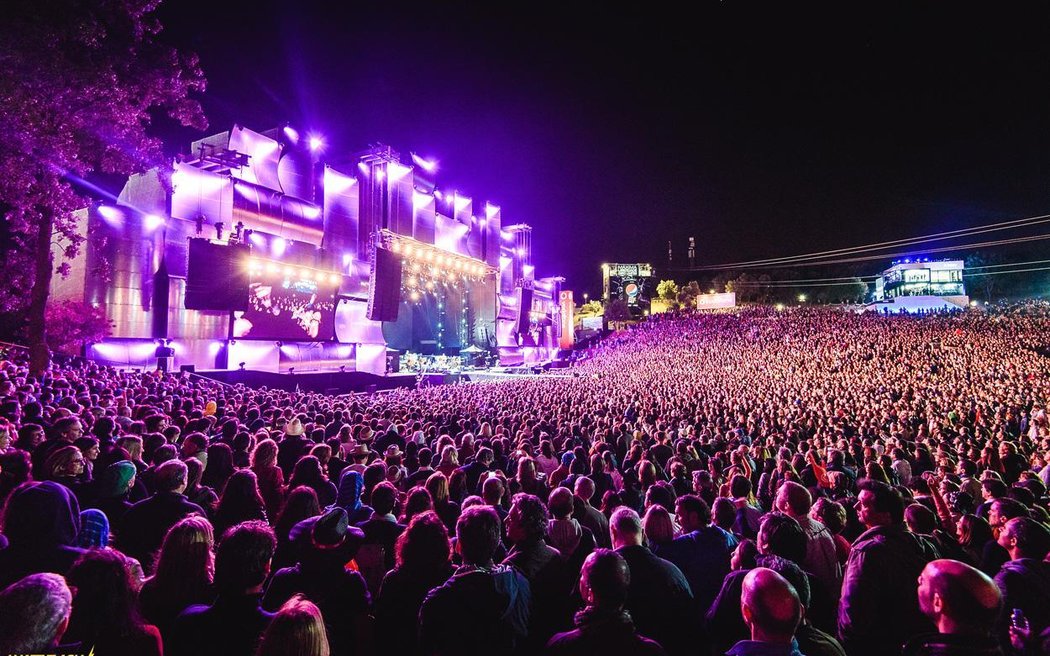 For the next two weekends, Rio de Janeiro is set to become the world’s music capital, as artists and fans from around the world gather to celebrate another edition of Rock in Rio, Brazil’s most famous festival. As usual, the Brazilian crowd is set to be a force of its own—with the power to leave the greatest artists breathless or make regimes tremble, depending on the mood.

But, as Rock in Rio grew to become more of a lifestyle experience than a music festival, political demos have been in the background. For 2019, social media debates are focused on the representativity seen on stage—as this edition is featuring a bigger number of black artists, but has the lowest number of female acts since 1985—and the gentrification of the music festival.

</p> <p>A new attraction, called the &#8220;Favela Stage,&#8221; aims to reveal talents from poor communities in Rio de Janeiro but <a href="https://g1.globo.com/pop-arte/musica/rock-in-rio/2019/noticia/2019/09/26/espaco-favela-e-inclusivo-artistas-questionam-acao-do-rock-in-rio-e-criminalizacao-do-lazer-no-morro.ghtml">has been criticized as being a caricature</a> of life in Rio&#8217;s slums. Excessive prices within the event also serve to exclude the poor.</p> <h2>The pioneers </h2> <p>Way before social media debates become the largest platform for political debate, history shows that <a href="https://brazilian.report/guide-to-brazil/2019/04/21/brazilian-music-festivals/">music festivals</a> used to take that role. In the 1960s, top festivals were sponsored by TV broadcasters; the national reach turned then into the major stage for cultural vanguards such as <em>Tropicália</em>, as well as a source of political resistance and mobilization against a <a href="https://brazilian.report/guide-to-brazil/2017/10/15/brazil-military-dictatorship/">dictatorial regime</a>.&nbsp;</p> <p>Inspired by the San Remo festival, the television producer Solano Ribeiro created the &#8220;Festival de Música Popular Brasileira.&#8221; It had four stages in different Brazilian cities: Guarujá (SP), São Paulo, Petrópolis (RJ) and the grand finale, at Excelsior TV’s studios in Rio de Janeiro.&nbsp;&nbsp;</p> <figure class="wp-block-image"><img src="https://brazilian.report/wp-content/uploads/2019/09/music-festival-1967.jpeg" alt="music festival 1967" class="wp-image-25128" srcset="https://brazilian.report/wp-content/uploads/2019/09/music-festival-1967.jpeg 740w, https://brazilian.report/wp-content/uploads/2019/09/music-festival-1967-300x178.jpeg 300w, https://brazilian.report/wp-content/uploads/2019/09/music-festival-1967-610x363.jpeg 610w" sizes="(max-width: 740px) 100vw, 740px" /><figcaption>Marília Medalha, Edu Lobo and Momento Quatro, in 1967</figcaption></figure> <p>An<a href="https://musica.uol.com.br/noticias/redacao/2015/04/07/ha-50-anos-nascia-a-mpb-protagonistas-lembram-festival-que-cunhou-o-termo.htm"> incredible interpretation</a> of the song &#8220;Arrastão&#8221; introduced Brazil to Elis Regina. She would go on to be one of the most recognized artists of her time, and among the greatest Brazilian singers ever.</p> <p>As noted by <a href="http://memoriasdaditadura.org.br/musica/">Memórias da Ditadura</a>, “Arrastão” established the structure of what would be known as festival songs. “The successful song needed lyrics that showed some socio cultural or political message, a melody able to be absorbed so the audience would sing-along and a contagious and surprising musical arrangement (&#8230;) that touched the audience enough to get ovations or hysterical shouts.”&nbsp;</p> <h2>Gagging ideas</h2> <p>The age of the festivals extended throughout the 1970s, carried over by TV Globo&#8217;s International Song Contest. It lasted for seven editions, but 1968 was the most controversial, influenced by rising political tensions. Globally, the year was marked by the May protests in France and, in Brazil, the dictatorship <a href="https://brazilian.report/power/2018/12/13/ai-5-brazil-torture-repression/">reacted to local protests by issuing</a> AI-5, a decree that closed the Congress and suppressed individual freedoms. As a consequence, <a href="https://brazilian.report/power/2018/09/25/bolsonaro-nostalgia-dictatorship/">repression and torture</a> would pick up in the following years.&nbsp;</p> <p>The political polarization led to the crowd booing Caetano Veloso due to his extravagant and somewhat jokey aesthetics. Young people demanded he make more of a political stance.</p> <p>Then the crowd’s rage was directed toward that year’s winning song, which once again wasn&#8217;t quite as political as the crowd desired. Their winner was Geraldo Vandré&#8217;s entry, &#8220;Pra não dizer que não falei das flores.&#8221;</p> <p>“When it was announced that Vandré had come second,the crowd broke down. The song had become an anthem for the student&#8217;s movement and those who took up arms against the regime. The military later banned the song.</p> <figure class="wp-block-embed-youtube wp-block-embed is-type-video is-provider-youtube wp-embed-aspect-4-3 wp-has-aspect-ratio"><div class="wp-block-embed__wrapper"> <span class="embed-youtube" style="text-align:center; display: block;"><iframe class='youtube-player' type='text/html' width='1200' height='675' src='https://www.youtube.com/embed/0KGBS5TuDr4?version=3&#038;rel=1&#038;fs=1&#038;autohide=2&#038;showsearch=0&#038;showinfo=1&#038;iv_load_policy=1&#038;wmode=transparent' allowfullscreen='true' style='border:0;'></iframe></span> </div></figure> <h2>The rise of a new era of music festivals</h2> <p>“What if life started now? What if the world was ours again? What if we wouldn’t stop singing, dreaming and living?”&nbsp;</p> <p>The lyrics of the first Rock in Rio Festival translated the entire sentiment of a generation. After 21 years, the military dictatorship was about to end, weakened by strong <a href="https://brazilian.report/guide-to-brazil/2017/10/15/brazils-new-republic/">popular pressure for free elections</a> and a severe economic crisis. Spending millions of dollars to assemble a festival of that proportion on a broken country that was never on the route of international popstars was seen by many as an insane endeavor.&nbsp;</p> <p>Yet, businessman Roberto Medina went on with his vision, and from January 11 to 20, the concert arena baptized as the &#8220;City of Rock” drew a crowd of 1.38 million people. AC/DC, Rod Stewart, Nina Hagen, and James Taylor performed to more than 200,000 people each, but no other act was as popular British rock band Queen. About to be free for the first time in two decades, 300,000 Brazilians sang along to the lyrics of &#8220;Love of My Life&#8221; to a visibly overwhelmed Freddie Mercury.</p> <p>Brazilian bands such as Barão Vermelho and Kid Abelha performed wearing the colors of Brazil and many national flags were seen on the audience. Rock in Rio was celebrated as a festival that marked the dawn of a new democratic era in Brazil.&nbsp;&nbsp;&nbsp;</p> <figure class="wp-block-image"><img src="https://brazilian.report/wp-content/uploads/2019/09/rock-in-rio-1985.jpg" alt="rock in rio 1985" class="wp-image-25129" srcset="https://brazilian.report/wp-content/uploads/2019/09/rock-in-rio-1985.jpg 620w, https://brazilian.report/wp-content/uploads/2019/09/rock-in-rio-1985-300x173.jpg 300w, https://brazilian.report/wp-content/uploads/2019/09/rock-in-rio-1985-610x351.jpg 610w" sizes="(max-width: 620px) 100vw, 620px" /><figcaption>Barão Vermelho at 1985&#8217;s Rock in Rio</figcaption></figure> <h2>Brasília is the target </h2> <p>After several editions in Portugal and Spain, Rock in Rio came home in 2011. Back then, political resentment was already poignant in Brazil, in light of corruption scandals such as the Mensalão. Paying tribute to politically-engaged Brazilian rock bands, Capital Inicial performed “Que País É Esse?”—a famous protest song about Brazilian inequalities. Followed by 100,000 people, singer Dinho Ouro Preto <a href="https://ultimosegundo.ig.com.br/rockinrio/capital-inicial-faz-show-energico-e-estremece-rock-in-rio/n1597229824690.html">dedicated the song to the then-president of Senate, José Sarney</a>, who was relentlessly cursed by the audience.</p> <p>In 2017’s edition, Brazilian pop-rock band Skank was responsible for another outburst of rage and wrath. Before playing “Indignação,” lead singer Samuel Rosa attacked politicians, sparking chants of “Fora, Temer” (Temer out), in a nod to then-president Michel Temer.</p> <p>“I’d like to ask Brazilian politicians if they could help us by not making it so hard to see a bit of integrity or morale in them. (&#8230;) We don’t look like you, Brazilian politicians. You’re worse than thieves, you kill people,” said Mr. Rosa.

The digital music boom in Brazil

Carnival gets even more political in 2018