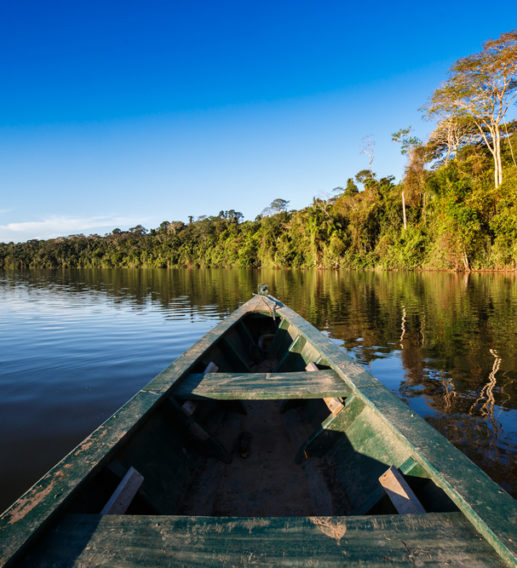 The Pan-Amazonian region protects the world’s largest rainforest, accounting for 40 percent of the entire South American continent. It is home to indigenous peoples, which take up 28 percent of the land, and mega biodiversity in protected areas which represent 23 percent of the region. Now, more than ever, this great cultural and natural wealth faces many challenges.

The Amazonian Georeferenced Socio-Environmental Information Network (RAISG)—a technical group made up of organizations from six countries in the region—has published its latest collection of maps on the pressures and threats faced by the Amazonian region.

The publication, updated in 2018, addresses six themes: interventions in transport infrastructure (roads, waterways, railways), energy (hydroelectric projects), and extractive industries (mining and oil), as well as monitoring the frequency of burning and deforestation. The results show that 68 percent of the region’s protected natural areas and indigenous territories overlap with infrastructure projects and investment plans.

The RAISG shows that, considering just mining and oil, 87.2 million hectares, or 22 percent of the 390 million hectares dedicated to conservation and indigenous territories, are subject to some kind of threat or pressure.

“Currently, there is no national policy for the Amazon that will allow us to draw up a comprehensive, coherent and long-term vision for the region,” said Richard C. Smith, director of Instituto Bien Común, in Peru. “Thus, a clear territorial development strategy is also not in force. In fact, guidance for policy decisions depends mainly on circumstances and the will of the current rulers.”

As today is World Environment Day, The Brazilian Report will republish this study in three parts, focusing first on transport infrastructure, then extractive industries, and finally, on deforestation itself.

Chapter 1: Routes into the Amazon rainforest

Chapter 3: The loss of the Amazon