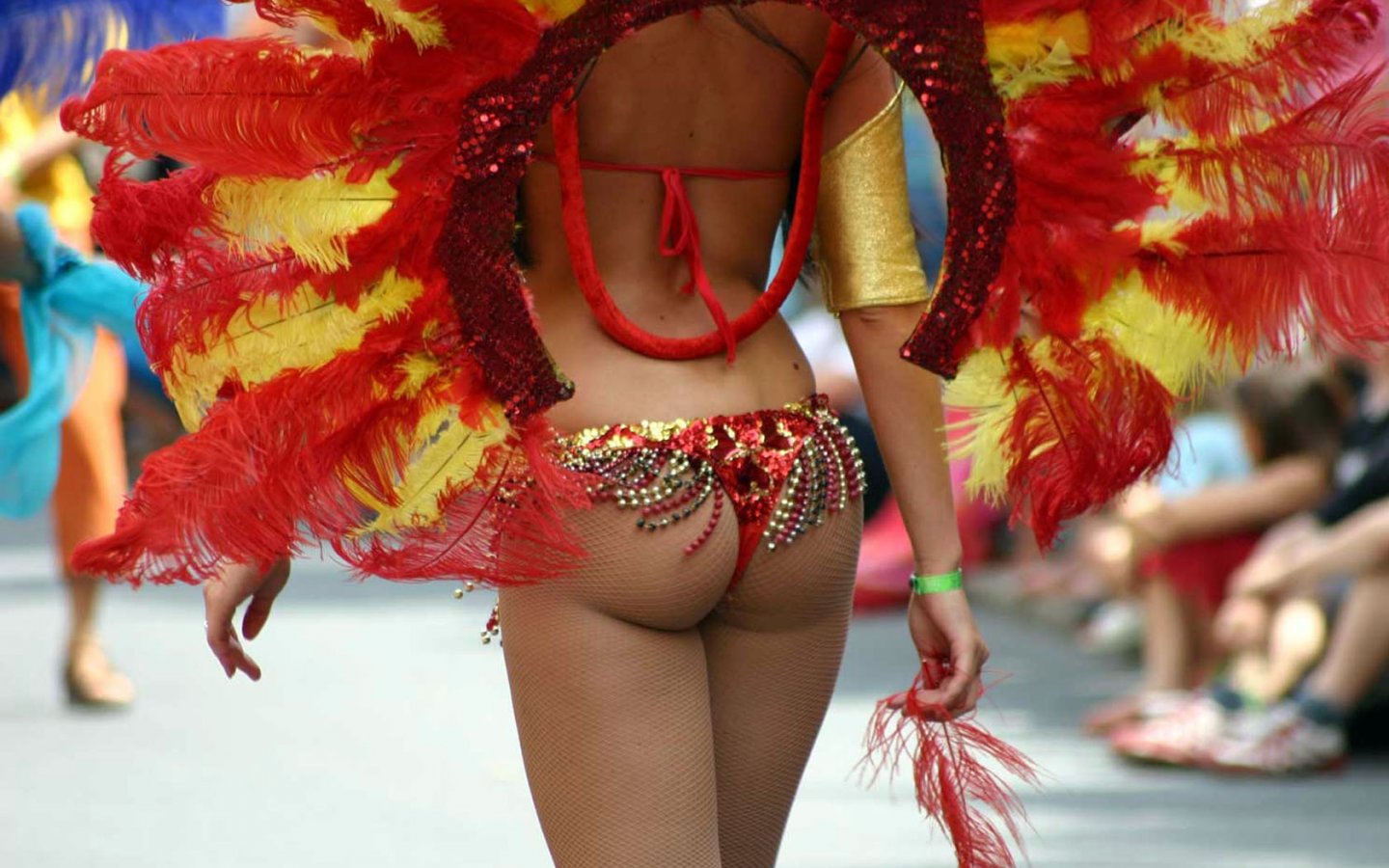 The butt is a Brazilian cultural symbol

Carnival celebrations in Brazil make headlines every year, normally accompanied by photos of samba school muses wearing little more than gems and feathers. But according to anthropologist Mirian Goldenberg, a professor at Federal University of Rio de Janeiro, this superficial coverage reinforces stereotypes about Brazilian women both inside and outside of the country.

“Foreigners have an image of Brazilian women that is very much related to Carnival,” she told The Brazilian Report. “But the bodies on display during Carnival are really bodies that are very sculpted, perfect, curvaceous. The image that foreigners see of Brazilians is a very exposed body, almost nude, principally at Carnival.”

</p> <p>Goldenberg’s work, which began in 2000, originally looked at marriage, infidelity and sexuality. However, her findings led her to eventually turn toward cultural attitudes to women’s bodies in Brazil. Men in her initial study said that women’s bottoms were the most important factor in sexual attraction, and women also rated it among their most important physical features.</p> <div class="wp-block-image"><figure class="alignleft"><img src="https://brazilian.report/wp-content/uploads/2018/02/05-mr.jpg" alt="brazil miss bumbum brazilian butt lift cultural obsession martha rocha miss universe" class="wp-image-2581" srcset="https://brazilian.report/wp-content/uploads/2018/02/05-mr.jpg 180w, https://brazilian.report/wp-content/uploads/2018/02/05-mr-172x300.jpg 172w" sizes="(max-width: 180px) 100vw, 180px" /></figure></div> <p>Brazil’s butt obsession goes back well beyond Goldenberg’s research. Brazil first gained international notoriety back in 1954 with the Miss Universe beauty pageant. Martha Rocha (photo), the reigning Miss Brazil at the time, lost the Miss Universes title for having hips two inches larger than the contest permitted.</p> <p>But within Brazil, the fixation with the perfect derriere goes much further back into the country’s history. Gilberto Freyre, the late Brazilian anthropologist credited as one of the few able to explain some of Brazil’s complicated cultural nuances, suggested that Brazilian ideas around perfect backsides go back as far as <a href="https://brazilian.report/2017/09/25/colonial-brazil/">colonization</a>.</p> <h2>The butt as an enduring cultural obsession</h2> <p>In 1984, Freyre laid out a 26-page explanation of what he termed <a href="http://www.releituras.com/gilbertofreyre_bunda.asp">“national preference.”</a> Portuguese colonizers often forcibly mixed with enslaved women of indigenous and African descent – to a much wider extent than the Spanish did in the rest of Latin America. This cultural idealization of a rounder bottom carried through to the mid-20th century when it became a pop culture discussion topic.</p> <p>In the early 1960s, some of Brazil’s most prominent musicians turned to the Brazilian backside for inspiration. Manuel Bandeira and Vinícius de Moraes coined the expression <em>“latifúndio dorsal”</em> to describe the ideal female backside – a term whose rough translation, “large dorsal estate”, speaks volumes about the size and values attributed to ladies’ behinds. Tom Jobim and Vinicius de Moraes also drew inspiration from the same source for what is arguably one of Brazil’s most famous songs, “Girl from Ipanema.”</p> <p>Idealized female buttocks snowballed in Brazilian pop culture during the 1970s. Two dancers, in particular, <a href="http://www1.folha.uol.com.br/folha/ilustrada/ult90u63269.shtml">Gretchen</a> and Rita Cadillac, were among the first female artists to gain fame for their behinds, battling it out routinely to be known as “Brazil’s Butt Queen”.</p> <p>“From ’78, with Gretchen, ‘butt music’ appeared, exploiting female sexuality and getting straight to the point,” Rodrigo Faour, author of ‘The Sexual History of Popular Brazilian Music’, explained to Brazilian media, saying that this legacy endures in today’s pop culture. Singer Anitta’s recent hit <em>‘Vai Malandra’</em>, whose lyrics and video center on the artist’s intricate hip movements, serves as further evidence of this: when it was released in December 2017, the video <a href="https://www.terra.com.br/diversao/purebreak/anitta-quebra-recordes-com-apenas-24-horas-de-vai-malandra-veja-numeros,c8e07a9819ccbdc116e9ac3d94e325d757btuzyb.html">received</a> more than 14 million hits in its first 24 hours on YouTube.</p> <figure class="wp-block-embed-youtube wp-block-embed is-type-video is-provider-youtube wp-embed-aspect-16-9 wp-has-aspect-ratio"><div class="wp-block-embed__wrapper"> <span class="embed-youtube" style="text-align:center; display: block;"><iframe class='youtube-player' type='text/html' width='1200' height='675' src='https://www.youtube.com/embed/kDhptBT_-VI?version=3&#038;rel=1&#038;fs=1&#038;autohide=2&#038;showsearch=0&#038;showinfo=1&#038;iv_load_policy=1&#038;wmode=transparent' allowfullscreen='true' style='border:0;'></iframe></span> </div></figure> <p>The internationally-famous Miss Bumbum (literally &#8216;Miss Butt&#8217;) is another manifestation of the butt&#8217;s power as a cultural symbol within Brazil. The contest, whose sole purpose is to judge a woman’s bottom, was created in 2011 and catapulted several women to their 15 minutes of fame. Miss Bumbum selects one representative from each Brazilian state to compete against each other for online votes of their admirers. Competition is so fierce that in 2017, a handful of candidates were punished for using robots to skew the results.</p> <p>The 2018 edition of Miss Bumbum will be its last. “I don’t want the contest to become a joke that’s no longer funny. We have to quit while we’re on top,” said Cacau Oliver, the creator of the competition. Miss Bumbum’s last run will include, for the first time, a transgender woman.</p> <figure class="wp-block-image alignnone size-full wp-image-2580"><img src="https://brazilian.report/wp-content/uploads/2018/02/brazil-society.jpg" alt="brazil miss bumbum brazilian butt lift cultural obsession" class="wp-image-2580" srcset="https://brazilian.report/wp-content/uploads/2018/02/brazil-society.jpg 950w, https://brazilian.report/wp-content/uploads/2018/02/brazil-society-300x200.jpg 300w, https://brazilian.report/wp-content/uploads/2018/02/brazil-society-768x512.jpg 768w" sizes="(max-width: 950px) 100vw, 950px" /><figcaption>Miss Bumbum contestants from 2016.</figcaption></figure> <h2>Brazilian women face health consequences</h2> <p><em>‘Vai Malandra’</em> was applauded on social networks for its opening shot, which zoomed in on Anitta’s buttocks and boldly showed cellulite. “Difficult to put into words the importance of Anitta to show the cellulite in the first second of the video,” <a href="https://twitter.com/DedaAladim/status/942781050803113985/photo/1">one tweet reads</a>.</p> <p>However, the booming plastic surgery industry tells another story. Between 2012 and 2014, the number of silicone butt implant surgeries in Brazil <a href="https://oglobo.globo.com/sociedade/saude/em-busca-do-bumbum-perfeito-12516682">grew by 547 percent</a>, according to the International Society for Aesthetic Plastic Surgery.</p> <p>Demands for filler techniques that take fat from another body part and inject it into the buttocks, a surgery pioneered by <a href="http://www.bbc.com/news/world-latin-america-37009138">Dr. Ivo Pitanguay</a> and nicknamed the ‘Brazilian butt lift’, has also soared. The surgery, which can double the size of the recipient’s backside, has found international popularity as well; the International Society of Aesthetic and Cosmetic Surgery reported almost 320,000 such surgeries globally in 2015.</p> <p>Despite its popularity, the filler procedure is risky. But the warning of Brazil’s Federal Council of Medicine (CFM) against the procedure doesn’t change much for Brazilian women, who continue to seek perfection through plastic surgery <a href="https://nypost.com/2015/01/28/brazilian-beauty-is-poster-child-for-dangerous-plastic-surgery-obsession/">despite risks</a> to their health. This even extends to more intimate areas, with an <a href="https://www.reuters.com/article/us-brazil-plasticsurgery/soaring-demand-for-female-genital-surgery-sparks-debate-in-brazil-idUSKBN1FL6B1">80-percent increase</a> in surgeries among Brazilian women seeking to perfect the shape of their genitals registered in 2016.</p> <p>Meanwhile, the pressure to attain the perfect body has a heavy psychological weight for many Brazilian women. “Brazilian women are the women who most invest in, worry about and are most unsatisfied by their own bodies,” anthropologist Goldenberg said.</p> <p>But, Goldenberg says, there is cause for hope. Even in beach cities like Rio, where the pressure to look good in unforgiving and often minimal clothing runs high, women will still flaunt body shapes far more diverse than the ideals marketed to them by the beauty and plastic surgery industry. “Just as the Brazilian woman endlessly suffers for not having a body that fits the ‘profile’ – which the majority don’t – many still have pride in showing off their bodies,” she said. “The Brazilian woman is a paradox.”

How important are state-owned companies to Brazilian cultural investments?

In Brazil, plastic surgery patients risk everything for the ‘right to beauty’

How female politicians are boycotted by Brazilian parties