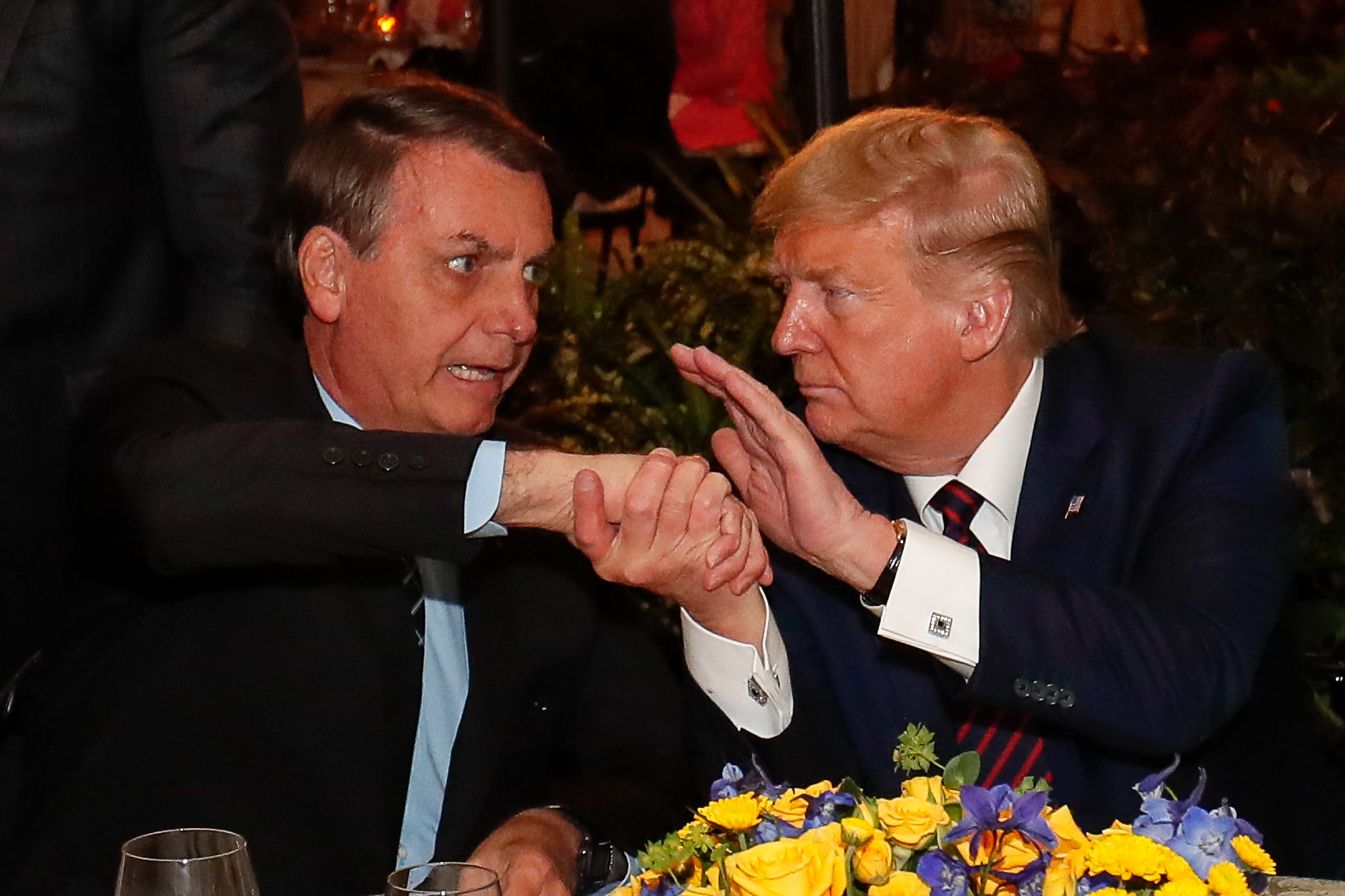 In a post on his official Facebook page, Brazil’s President Jair Bolsonaro confirmed that his tests for the novel coronavirus came back negative. This was contradictory to earlier reports from local and international media, which had published that the results were in fact positive. In his post confirming his negative results, the president also published a photograph of himself making an offensive “up yours” gesture, which he has used on several occasions to insult the Brazilian press.

Brazilian president was tested after it was confirmed that his press secretary, Fábio Wajngarten, was infected following a trip to the U.S. The visit—motivated by the signature of a <a href="https://brazilian.report/power/2020/03/07/jair-bolsonaro-donald-trump-dine-over-defense-deal/">military deal between Brazil and the U.S.</a>—included meetings with President Donald Trump and Vice President Mike Pence. On Thursday, Mr. Trump told White House reporters he is &#8220;not concerned&#8221; about possibly being infected himself.</p> <p>The first reports of a Covid-19 positive diagnosis surfaced around 10:30 am, with Leandro Mazzini, a columnist at Rio-based daily newspaper <em>O Dia</em> citing &#8220;<a href="https://odia.ig.com.br/colunas/coluna-esplanada/2020/03/5881947-primeiro-exame-de-bolsonaro-testa-positivo-para-coronavirus.html#foto=1">direct sources from the presidential palace</a>.&#8221; Then, <em>Fox News</em>&#8216;s Chris Irvine <a href="https://www.foxnews.com/world/brazil-bolsonaro-tests-positive-coronavirus">confirmed the information</a>—naming Congressman Eduardo Bolsonaro—the president&#8217;s own son—as the source.&nbsp;</p> <p>Shortly after, however, Eduardo Bolsonaro took to Twitter to debunk the information, saying the test results hadn&#8217;t been concluded at that point. He added a new tweet, denying ever talking to any reporter about his father&#8217;s health status.</p> <figure class="wp-block-embed-twitter wp-block-embed is-type-rich is-provider-twitter"><div class="wp-block-embed__wrapper"> <blockquote class="twitter-tweet" data-width="550" data-dnt="true"><p lang="pt" dir="ltr">Jamais falei com alguém da imprensa que testes do Presidente <a href="https://twitter.com/jairbolsonaro?ref_src=twsrc%5Etfw">@jairbolsonaro</a> tenham dado positivo, jamais. Até porque essa informação jamais chegou para mim.<br><br>A única informação que tenho é que PR <a href="https://twitter.com/jairbolsonaro?ref_src=twsrc%5Etfw">@jairbolsonaro</a> , Min. <a href="https://twitter.com/gen_heleno?ref_src=twsrc%5Etfw">@gen_heleno</a> e eu testamos NEGATIVO para coronavírus.</p>&mdash; Eduardo Bolsonaro🇧🇷 (@BolsonaroSP) <a href="https://twitter.com/BolsonaroSP/status/1238495040265125889?ref_src=twsrc%5Etfw">March 13, 2020</a></blockquote><script async src="https://platform.twitter.com/widgets.js" charset="utf-8"></script> </div></figure> <p>Minutes later, the president vented on Twitter: &#8220;DO NOT BELIEVE IN FAKE NEWS MEDIA.&#8221;</p> <h2>Bolsonaro&#8217;s love for trolling the media</h2> <p>Today&#8217;s events were a textbook example of communication standards within the Jair Bolsonaro government. As the media around the world kicked up a frenzy, officials within the presidency remained silent, and Mr. Bolsonaro appeared to take pleasure in debunking the story.</p> <p>This is part of the Brazilian government&#8217;s adversarial strategy towards the press, feeding Mr. Bolsonaro&#8217;s campaign narrative that the mainstream media was not to be trusted.</p> <p>On a number of occasions, major Brazilian newspapers have broke important stories concerning the government, such as cabinet firings. The president always denies the reports, before making his own declarations at a later date.</p> <p>This was the case with the firing of Education Minister Ricardo Vélez in 2019. <em>Folha de S. Paulo</em> reported that the minister would be fired, which Mr. Bolsonaro refuted, only to go ahead with the sacking some days later.</p> <h2>What the government is doing</h2> <p>In <a href="https://brazilian.report/newsletters/brazil-daily/2020/03/13/coronavirus-scare-bolsonaro-anti-congress-rally/">this morning&#8217;s Daily Briefing</a>, we listed a series of measures the government has issued for dealing with the Covid-19 outbreak. More has been done since, according to the Federal Register:</p> <ul><li>After House Speaker Rodrigo Maia openly criticized Economy Minister Paulo Guedes for &#8220;barely&#8221; planning a reaction to the outbreak&#8217;s economic effects, the minister promised an economic plan for the short term. Mr. Guedes said all options &#8220;that don&#8217;t affect Brazil&#8217;s fiscal balance&#8221; are on the table.</li><li>The Science and Technology Ministry has created a committee of experts in infectious diseases. It will be responsible for &#8220;integrating efforts in research, technological development, and the establishment of priorities&#8221; related to &#8220;emerging viral diseases.&#8221;</li><li>All government bodies must &#8220;organize awareness campaigns&#8221; around the risks related to the novel coronavirus. They should reassess all business travel and events with &#8220;numerous attendants,&#8221; canceling any that are &#8220;non-essential.&#8221;</li></ul> <h2>Donald Trump at risk?</h2> <p>Jair Bolsonaro was rumored to have contracted the coronavirus after an official visit to the U.S. last week, in which he and his delegation—including Press Secretary Fabio Wajngarten, who is also <a href="https://brazilian.report/newsletters/brazil-daily/2020/03/12/covid-19-brazil-presidential-palace-trump-bolsonaro/">confirmed as positive for Covid-19</a>—met with U.S. President Donald Trump and a number of high-ranking U.S. officials.</p> <p>On Saturday evening, Mr. Bolsonaro and Mr. Wajngarten had dinner with the U.S. president at his Mar-a-Lago residence in Florida. Later that evening, the Brazilian delegation attended the birthday party of <em>Fox News</em> journalist Kimberly Guilfoyle, who is currently dating Donald Trump Jr. It is believed that Jair Bolsonaro and Donald Trump once again exchanged pleasantries during the event.</p> <p>According to the White House, Mr. Trump was &#8220;not concerned&#8221; with the positive diagnosis of Jair Bolsonaro&#8217;s press secretary, refusing to take a coronavirus test and claiming that he and VP Mike Pence had &#8220;almost no interactions&#8221; with Mr. Wajngarten.</p> <p>At least one U.S. elected official who attended the Mar-a-Lago event, however, has been contracted Covid-19. Miami Mayor Francis Suarez <a href="https://www.miamiherald.com/news/local/community/miami-dade/article241163311.html">confirmed the positive test</a> to the <em>Miami Herald.</em> Mr. Suarez expressed concerns for those who had contact with him in some capacity over the past four days.</p> <blockquote class="wp-block-quote"><p><em>“If we did not shake hands or you did not come into contact with me if I coughed or sneezed, there is no action you need to take whatsoever. If we did, however, touch or shake hands, or if I sneezed or coughed near you since Monday, it is recommended that you self-isolate for 14 days, but you do not need to get tested. After speaking with medical personnel, I will continue to follow Department of Health protocol and remain isolated while I lead our government remotely.”</em>

Beware of the viral president!

In 10 weeks as president, Jair Bolsonaro made one false statement per day