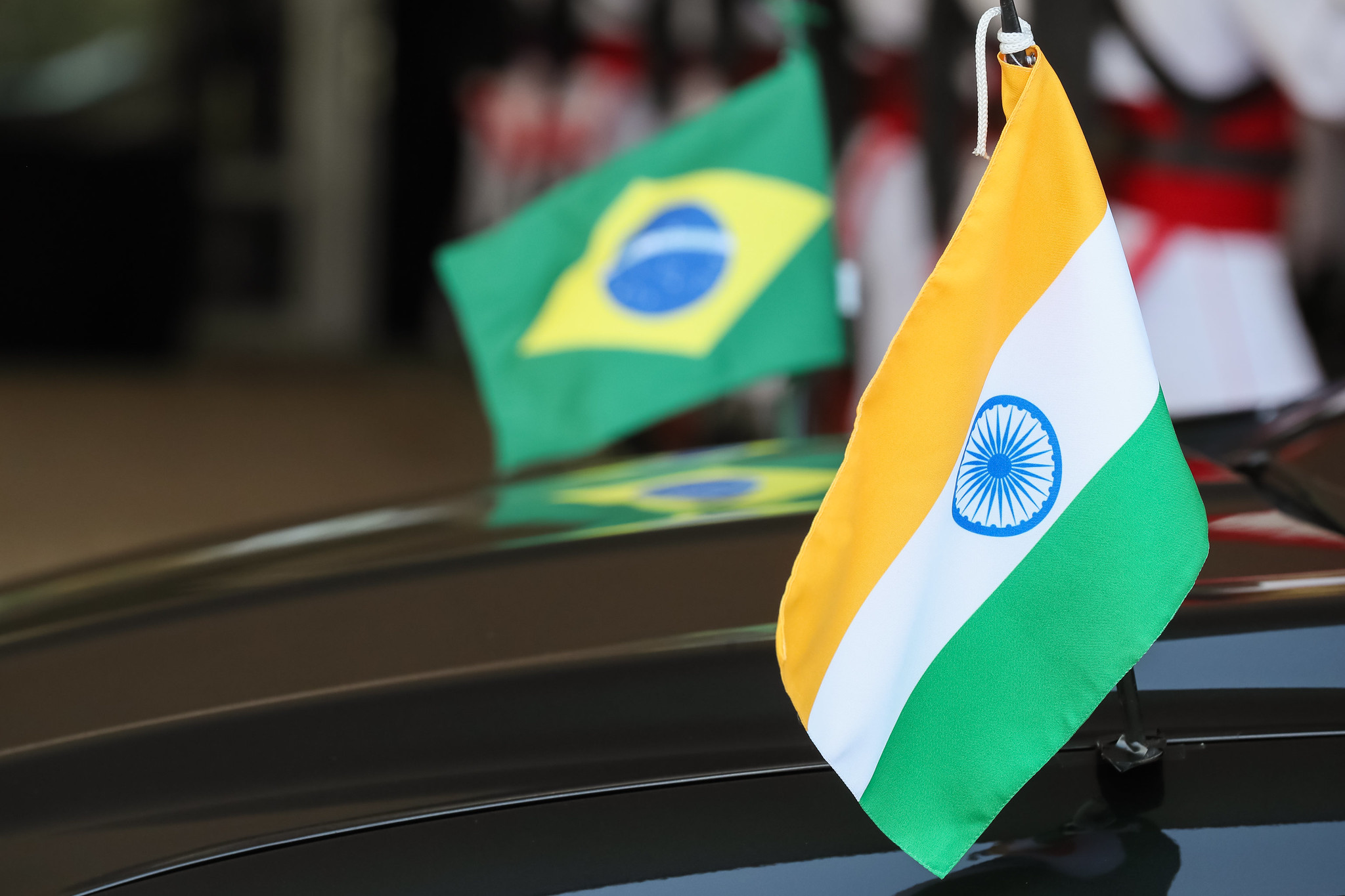 President Jair Bolsonaro’s crude manner, constant attacks on the press, and willingness to dismantle Brazil’s environmental controls have earned him some contempt from the international community. In India, though, where today he begins a four-day visit, Prime Minister Narendra Modi will roll out the red carpet to the Brazilian far-right leader. Mr. Bolsonaro will be the “chief guest” at India’s Republic Day celebrations, on January 26—the highest honor to a foreign head of state.

The two leaders share many traits in common, the biggest of all being their ultra-nationalist rhetoric and disregard for minorities. Both have also been heavily criticized for prioritizing economic growth over environmental policies, often describing the latter as a roadblock to the former.

</p> <p>Beyond a photo op, the two presidents have a full agenda planned, involving matters such as defense, science and innovation, culture, and education. But more than anything else, the trip will serve as a chance for rapprochement between <a href="https://brazilian.report/power/2019/11/13/ten-years-brics-looks-more-like-china-and-co/">New Delhi and Brasília</a>—a relationship that has been somewhat shaken due to Brazil&#8217;s sharp shift in foreign policy.</p> <figure class="wp-block-image"><img src="https://brazilian.report/wp-content/uploads/2020/01/49064682406_6be185b0fd_k-1024x683.jpg" alt="Brazilian President Jair Bolsonaro and Indian Prime Minister Narendra Modi. Photo: Alan Santos/PR" class="wp-image-30743" srcset="https://brazilian.report/wp-content/uploads/2020/01/49064682406_6be185b0fd_k-1024x683.jpg 1024w, https://brazilian.report/wp-content/uploads/2020/01/49064682406_6be185b0fd_k-300x200.jpg 300w, https://brazilian.report/wp-content/uploads/2020/01/49064682406_6be185b0fd_k-768x512.jpg 768w, https://brazilian.report/wp-content/uploads/2020/01/49064682406_6be185b0fd_k-610x407.jpg 610w" sizes="(max-width: 1024px) 100vw, 1024px" /><figcaption>Brazilian President Jair Bolsonaro and Indian Prime Minister Narendra Modi meet in Brasília (Nov. 2019). Photo: Alan Santos/PR</figcaption></figure> <p>&#8220;The Bolsonaro administration has opted for nearly-full alignment with the U.S., making concessions such as waiving Brazil&#8217;s status as a developing nation in the World Trade Organization (WTO). That has worried Indian diplomacy, as it could weaken the South Asian country&#8217;s position to latch on to these benefits,&#8221; says political scientist Mauricio Santoro, an international relations professor at the State University of Rio de Janeiro.</p> <p>Government officials say Messrs. Bolsonaro and Modi should ink between 10 and 20 trade deals. But regardless of what the government says, trading relations will not be at the forefront of the agenda. &#8220;It is difficult to imagine that the economic side will be the most important aspect of Brazilian relations with India, due to the nature of their societies and the poor compatibility between their economies,&#8221; says Mr. Santoro.</p> <h2>Why does Brazil trade so little with India?</h2> <p>Despite being the second-most populated country in the world, India is only Brazil&#8217;s fourth-largest trading partner in Asia.&nbsp;</p> <p>Bilateral relations improved sharply in the 21st century with the establishment of a strategic partnership in 2006. &#8220;The two countries, however, have not yet developed clear strategies towards each other and stereotypes continue to reinforce the existing lack of knowledge between both societies,&#8221; writes researcher Karin Vazquez, a member of the Center for BRICS Studies at Shanghai&#8217;s Fudan University.</p> <p>The result is that Brazilian trade with India remains around 20 times smaller than with China. More than that, the portfolio of commerce between the two nations is narrow, with oil dominating one-third of Brazilian exports to India.</p> <div class="flourish-embed" data-src="visualisation/1274740"></div><script src="https://public.flourish.studio/resources/embed.js"></script> <p>&#8220;History plays a big role in these obstacles,&#8221; says Mr. Santoro. &#8220;During the second half of the 20th century, both Brazil and India pursued inward-looking development models, based on government action and protectionism.&#8221; The results that followed were quite different, however. Brazilian developmentalism delivered big success between the 1950s and 1970, while India&#8217;s “License Raj”—an elaborate system of regulations and red tape—was often lackluster.</p> <p>&#8220;Throughout the years, both economies continued to have little structural compatibility, which reflects poor trading figures.&#8221;</p> <h2>Diverging interests in agriculture</h2> <p>Since last year, Brazil and India have traded barbs at the WTO, with Brazilian officials accusing the South Asian country of plummeting international sugar prices due to its subsidies to farmers—which creates an oversupply of the product. In 2018, sugar prices hit a ten-year low, but have since bounced back to their highest in two years, thanks to a <a href="https://asia.nikkei.com/Business/Markets/Commodities/Sugar-prices-hit-two-year-high-on-surging-biofuel-demand">surging biofuel demand</a>.</p> <p>Nevertheless, Brazilian producers estimate their annual losses at between USD 1.2 and 1.3 billion.</p> <p>Just last week, Brasília filed its first motion against the subsidies—but New Delhi seems adamant in its desire to keep them.</p> <p>&#8220;India [has always] delivered the same reply: the Indian measures in question were not having a trade-distorting effect on the global sugar market nor were they affecting the economic interests of the complainants,&#8221; a WTO report said.</p> <p>Mr. Santoro says Prime Minister Modi will unlikely yield a single inch on the matter, as Indian agriculture remains scarcely productive—and around <a href="https://data.worldbank.org/indicator/SL.AGR.EMPL.ZS?locations=IN">40 percent of the country is employed in farms</a>.</p> <h2>Trade deals Bolsonaro and Modi are set to sign</h2> <ul><li>Lowering tariffs on poultry and pork;</li><li>Exchange of genetic material—embryos and semen—of dairy cattle;</li><li>Enhancing India&#8217;s trade deal with Mercosur (currently limited to 450 products);</li><li>Offering more legal predictability for Indian investors in Brazil and vice versa;</li><li>Revising rates of the countries&#8217; 1992 deal to eliminate double taxation;</li><li>A pensions agreement, allowing executives to count their length of service outside of the country as part of their retirement. For companies, this would eliminate double social security contributions;</li><li>Cooperation for ethanol use and production on Indian soil.

Even when absent, Jair Bolsonaro’s presence will be felt at the G20 summit

What to take from the Bolsonaro-Trump meeting

Bolsonaro’s Brazil stuck between the U.S. and China