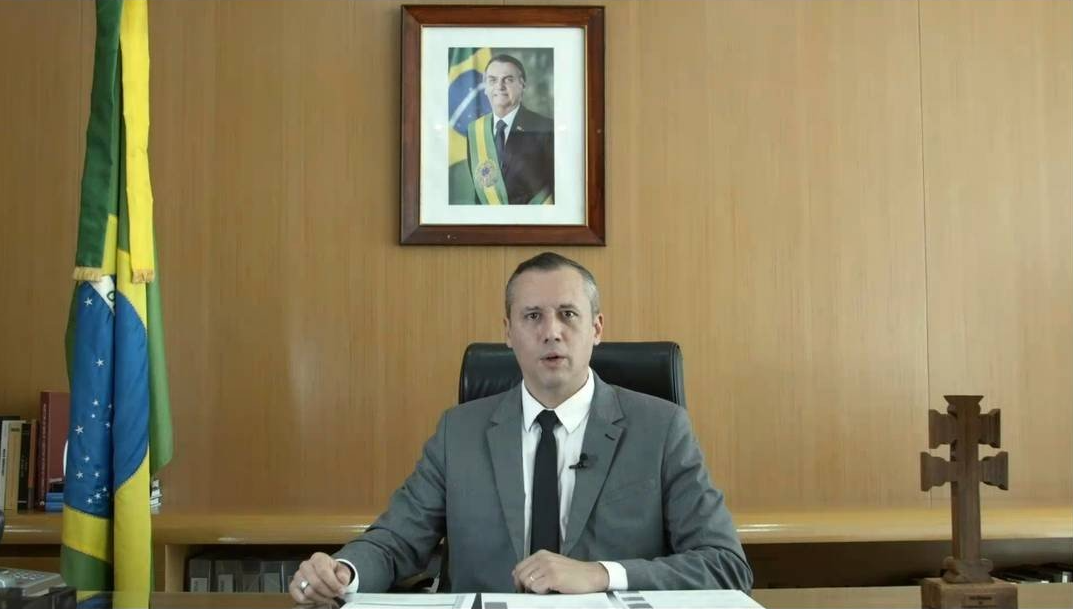 Sitting upright at his desk, the culture secretary addresses the nation. A triumphant portrait of the head of state hangs on the back wall, a national flag lies limp on a pole to the speaker’s right-hand side, and an obscure ecclesiastical two-barred cross sits to his left.

An excerpt from Wagner’s opera Lohengrin plays softly in the background, as the government official stares down the camera, speaking of how the nation’s art must be “heroic, national, with great emotional capacity.”

It is a scene that could be straight out of Nazi Germany—and in many ways, it was—but this occurred in Jair Bolsonaro’s Brazil.

</p> <figure class="wp-block-embed-twitter wp-block-embed is-type-rich is-provider-twitter"><div class="wp-block-embed__wrapper"> <blockquote class="twitter-tweet" data-width="550" data-dnt="true"><p lang="pt" dir="ltr"><a href="https://twitter.com/hashtag/Pr%C3%AAmioNacionaldasArtes?src=hash&amp;ref_src=twsrc%5Etfw">#PrêmioNacionaldasArtes</a> | Marco histórico nas artes e na cultura brasileira! Com investimento de mais de R$ 20 milhões, o Prêmio Nacional das Artes vai apoiar projetos de sete categorias em todas as regiões do Brasil. Dê o play e confira! <a href="https://t.co/dbbW4xuKpM">pic.twitter.com/dbbW4xuKpM</a></p>&mdash; Secretaria Especial da Cultura (@CulturaGovBr) <a href="https://twitter.com/CulturaGovBr/status/1217941233412321286?ref_src=twsrc%5Etfw">January 16, 2020</a></blockquote><script async src="https://platform.twitter.com/widgets.js" charset="utf-8"></script> </div></figure> <p>On Thursday evening, the Brazilian Culture Secretary posted a six-and-a-half-minute video featuring department head Roberto Alvim, announcing a new wave of government grants for the arts, aimed at productions on Brazilian history, &#8220;aligned to conservatism in the arts.&#8221;</p> <p>Social media reacted quickly to the publication, commenting first on the bizarre set design and the confusingly impassioned speech of Mr. Alvim, who took some three-and-a-half minutes not to introduce the impending government culture grants, but to gush about his plans for patriotic Brazilian art.</p> <p>The more attentive viewers, however, quickly picked up on exactly <em>where</em> Roberto Alvim borrowed some of his speech from, with one segment having plagiarized Adolf Hitler&#8217;s notorious Propaganda Minister Joseph Goebbels.</p> <p>Roberto Alvim declared that &#8220;Brazilian art in the next decade will be heroic and will be nationalistic; it will be endowed with great depth for emotional involvement and will be equally binding, as it is profoundly united with the urgent aspirations of our people, or it will cease to exist.&#8221;</p> <p>In &#8220;<a href="https://www.nytimes.com/2015/05/17/books/review/goebbels-a-biography-by-peter-longerich.html">Goebbels: A Biography</a>,&#8221; by Peter Longerich, the propaganda minister was quoted in a meeting with theater directors saying that &#8220;German art in the next decade will be heroic, steely but romantic, factual without sentimentality; it will be nationalistic, with great depth of feeling; it will be binding and it will unite, or it will cease to exist.&#8221;</p> <h2>Unsurprising backlash</h2> <p>The public outcry has been led by several political actors, including House Speaker Rodrigo Maia, who said Mr. Alvim had &#8220;crossed every line&#8221; and should be fired. At the time of publication, however, the government has yet to make a statement on the case. On Friday morning, the president&#8217;s press department said it would not comment, while Jair Bolsonaro&#8217;s Twitter feed has ignored the story, choosing instead to post a video of the head of state on a jetski.</p> <p>However, newspapers <em>O Globo</em> and <em>Folha de S. Paulo</em> reported that the president&#8217;s office has decided to dismiss Mr. Alvim.</p> <p>The Brazilian Israelite Confederation demanded Mr. Alvim&#8217;s immediate firing, saying that &#8220;emulating the vision of Hitler&#8217;s Nazi propaganda minister Joseph Goebbels is a terrifying sign of [Mr. Alvim&#8217;s] view on culture.&#8221;</p> <p>The President of Brazil&#8217;s Senate, Davi Alcolumbre, who is the first Jewish lawmaker to hold his office, said &#8220;it is unacceptable to have representatives with that kind of thinking.&#8221; While Germany&#8217;s official diplomatic Twitter channel in Brazil stated that they &#8220;oppose any attempt to banalize or even glorify the era of National Socialism.&#8221;</p> <figure class="wp-block-embed-twitter wp-block-embed is-type-rich is-provider-twitter"><div class="wp-block-embed__wrapper"> <blockquote class="twitter-tweet" data-width="550" data-dnt="true"><p lang="und" dir="ltr"><a href="https://t.co/VlUD0bCrTt">pic.twitter.com/VlUD0bCrTt</a></p>&mdash; AlemanhanoBrasil (@Alemanha_BR) <a href="https://twitter.com/Alemanha_BR/status/1218169825266229248?ref_src=twsrc%5Etfw">January 17, 2020</a></blockquote><script async src="https://platform.twitter.com/widgets.js" charset="utf-8"></script> </div></figure> <h2>&#8220;Just one sentence from Goebbels&#8221;</h2> <p>Though the government has remained quiet on the subject, Roberto Alvim quickly jumped to defend himself, via a post on social media. He claimed that he did not quote Goebbels, and that the striking similarity between the two speeches was simply a &#8220;rhetorical coincidence.&#8221;</p> <p>&#8220;My entire speech was based on a nationalistic ideal for Brazilian art, and there was a coincidence with ONE sentence from a Goebbels speech … I didn&#8217;t quote him and I NEVER would,&#8221; he wrote.</p> <p>&#8220;But the passage itself [credited to Goebbels] is perfect: heroism and the aspirations of the people is [sic] what we want to see in Brazilian art.&#8221;</p> <h2>The zeal of converts&nbsp;</h2> <p>Roberto Alvim was appointed as Brazil&#8217;s Culture Secretary only two months ago, after complaining that his career as a theater director &#8220;<a href="https://www.gazetadopovo.com.br/ideias/boicotado-diretor-desabafa-minha-carreira-praticamente-acabou/">was finished</a>&#8221; after he declared his support for Jair Bolsonaro. In an interview with newspaper <em>Gazeta do Povo</em> in mid-2019, he explained that he was once a left-wing atheist, &#8220;like everyone in the theater,&#8221; but that he converted to Catholicism and conservative political views after undergoing health problems in 2017.</p> <p>&#8220;It took me a while to come out of the closet as the conservative I had become,&#8221; he said. &#8220;After Bolsonaro&#8217;s stabbing, I was so shocked that I made a public statement on social media.&#8221;</p> <p>Mr. Alvim has also spoken of his new-found adulation for Olavo de Carvalho, the philosopher and ideological guru of the Jair Bolsonaro government. In response to this week&#8217;s video, Mr. Carvalho—who has in the past declared Pepsi to be made out of unborn fetuses, and Prince Charles to be an Islamic secret agent—suggested that Mr. Alvim &#8220;may not be right in the head.&#8221;

Bolsonaro puts his foot in it (again) with Armed Forces speech

Who are the Brazilian Integralists and why are they petrol-bombing comedians?