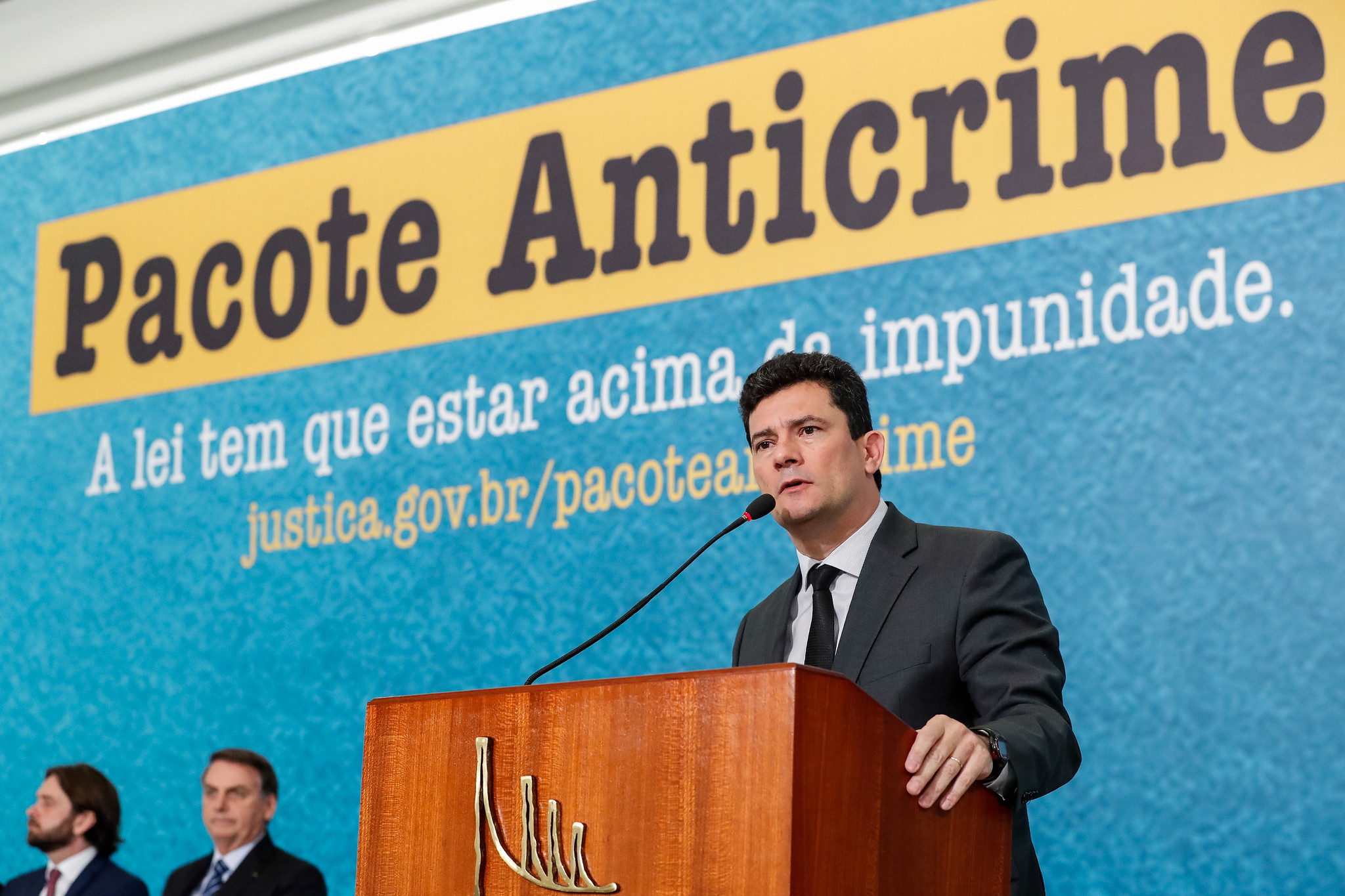 The so-called “anti-crime bill,” proposed by Justice Minister Sergio Moro as a solution to combat organized crime and corruption in Brazil, has now come in for criticism from its author. Sanctioned at the end of 2019, the bill was profoundly altered during its path through Congress, with Mr. Moro claiming it is “not the dream project,” and that politicians could have “gone further” and kept more of the Justice Minister’s original proposals.

But Sergio Moro’s main concern was not what members of Congress took out of his original proposal, instead it was one provision that the lawmakers put in. The controversial inclusion in the anti-crime bill creates a figure that Congress has dubbed the “guarantees judge,” which will work alongside federal magistrates and oversee the investigation phase of criminal cases.

</p> <p>This new role in the Brazilian justice system—similar to already existing offices in Portugal, Spain, Chile, Italy, and the U.S.—came in for such virulent criticism from Sergio Moro and his supporters that it seemed certain President Bolsonaro would veto the provision. In the end, he let it slip through the cracks, much to the displeasure of his Justice Minister.</p> <p>Brazil&#8217;s guarantee judges will act in the <a href="http://www.senado.gov.br/noticias/agencia/quadros/qd_167.html">pre-procedural phase</a> to ensure that the acts of the police and prosecutors during investigations comply with Brazilian laws. The idea is to avoid malpractice and the subsequent nullification of sentences.</p> <p>Still, a significant slice of public opinion is of the mind that the guarantees judge is little more than an invention designed to make it difficult to issue convictions in white-collar crime cases. These same groups see the provision as a direct attack on the Operation Car Wash investigations.</p> <p>Prosecutor Roberto Livianu, who also leads the <em>Não Aceito Corrupção </em>(I Don&#8217;t Accept Corruption) Institute, does not rule out this hypothesis. According to him, it is plausible that the creation of the guarantees judge was a stab at Car Wash, and that this measure—as well as others before it—has the sole purpose of frustrating the authorities who work on the operation.</p> <p>The motivation, says Mr. Livianu, lies in the Legislature, as he claims many of the members of Congress who voted for the measure are under investigation for corruption. &#8220;Since its inception, Operation Car Wash has come under fire, with attempts to weaken the Federal Police, limiting plea-bargain testimony, and sending corruption cases to electoral courts.&#8221;</p> <h2>Justice at a snail&#8217;s pace</h2> <p>But in addition to fighting corruption, Mr. Livianu, who holds a Ph.D. in law from the University of São Paulo, warns of the impacts introducing this new procedural position will have on the <a href="https://brazilian.report/guide-to-brazil/2017/10/16/brazils-justice-system-work/">judicial system</a>. One concerns the deficit of judges: it is a notorious fact that in Brazil there are fewer judges than are necessary for the courts to provide a minimally decent service.</p> <p>Data from the <a href="https://www.cnj.jus.br/wp-content/uploads/conteudo/arquivo/2019/08/justica_em_numeros20190919.pdf">Justice in Numbers</a> survey last year, put together by the National Council of Justice (CNJ), shows that 20 percent of all existing positions for judges in Brazil are currently vacant. In state courts, this deficit rises to 22 percent, and the federal sphere has 24 percent of unfilled places.</p> <p>Among other factors, this shortage of judges causes Brazil&#8217;s courts to move slowly. Additional CNJ data shows that lawsuits take an average of 10 years to be concluded at the federal level, and nine years at state level.</p> <p>Another problem related to the shortage of judges is the number of courts in Brazil which only have one judge for all types of cases. With the introduction of the guarantees judge, each case would require two magistrates: one for the investigation phase, and another for the trial itself. For these empty places, the law proposes a rotation of judges.</p> <p>Minister Sergio Moro criticized the measure. He claimed that &#8220;40 percent&#8221; of judicial sections in Brazil had only one judge—the real figure is close to 20 percent—and that the rotation system remains a &#8220;mystery&#8221; to him.</p> <p>Lawyers consulted by <strong>The Brazilian Report</strong> consider these arguments to be a fallacy. Criminal attorney Pierpaolo Cruz Bottini argues that proper management is all that is needed to successfully distribute judges to the two necessary roles of each case, helped further by electronic processes. CNJ data shows that in 2018, only 16.2 percent of new cases were filed by way of paperwork—the rest were lodged digitally.</p> <p>According to Congressman Fabio Trad, who is also a criminal attorney, this is a conservative argument which shows the &#8220;unwillingness&#8221; of critics to accept progress. &#8220;There will be no cost that can justify this level of antipathy.&#8221;</p> <p>But this progress risks never getting off the ground in the first place. Shortly after the enactment of the law that created the guarantees judge, associations of magistrates went to the Supreme Court to request the annulment of the provision. The Association of Federal Judges (Ajufe) and Brazilian Magistrate Association (AMB) claim the law is unconstitutional and that the deadline for implementing guarantee judges is too tight for courts to comply with. The law gave the courts 30 days to introduce the new system.</p> <h2>A fairer system?</h2> <p>Judge Carlos Alberto Garcete, who has served in courts in the state of Mato Grosso do Sul for ten years, is firmly in favor of the guarantee judge, basing his stance on research by German jurist Bernd Shünemann.</p> <p>The study was conducted with 58 German judges and prosecutors and gave rise to <a href="https://www.instructionaldesign.org/theories/cognitive-dissonance/">Festinger&#8217;s cognitive dissonance theory</a>. According to this line of research, people seek harmony with their cognitive system to ensure stable relationships between their knowledge and opinions. And when these two factors contrast, this &#8220;dissonance&#8221; is eliminated.</p> <p>Mr. Garcete defends the study by pointing out that the number of convictions by judges who participated in the study and had contact with the investigation was 50 percent higher than in the decisions made by judges who did not participate in the initial phase of the process. &#8220;Judges resist this because, when they do not study this issue deeply, they view this innovation as a criticism of their impartiality, but it is nothing like that. The idea is to improve the justice system.&#8221;