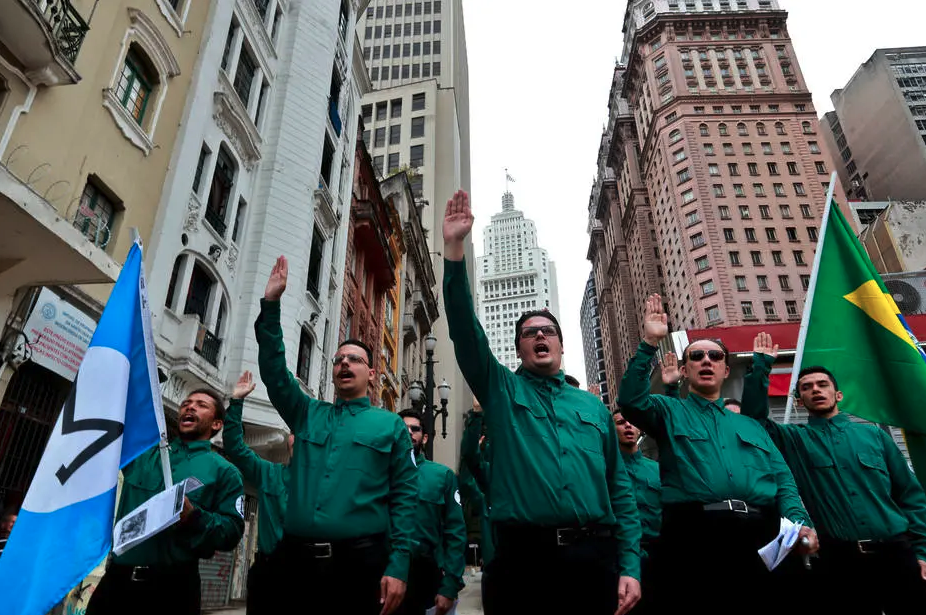 On November 9, in the city of São Paulo, a small group of green-shirted men held a curious demonstration, marching in rank and file, giving awfully Nazi-looking salutes and chanting “Anauê!”—an indigenous greeting meaning, “you are my brother.” These were integralists, supporters of the clerical fascist Brazilian Integralist Party (AIB) that existed during the 1930s. Led by writer Plínio Salgado, Brazilian Integralism was fashioned on Italian fascism, borrowing many of its symbols and credos and representing the only unabashed version of fascism the country has ever seen.

For all intents and purposes, Brazilian Integralism died at the end of the 1930s, making its resurgence on São Paulo’s streets in 2019 all the more surprising.

</p> <p>The response to the march was one of derision, with this repackaged fascism on Brazil&#8217;s streets—albeit on a very small dimension—treated as a harmless joke. The mood shifted slightly on Christmas Eve, however, after members of an integralist group <a href="https://www.nytimes.com/reuters/2019/12/26/world/americas/26reuters-brazil-violence.html">claimed responsibility</a> for a petrol bomb attack on the headquarters of satirical comedy troupe Porta dos Fundos, in Rio de Janeiro.</p> <p>The attackers had taken umbrage with Porta dos Fundos&#8217; Netflix Christmas special &#8220;The First Temptation of Christ,&#8221; which stars Jesus Christ as a gay man. One of the pillars of Brazilian Integralism is the staunch defense of Christian values.</p> <p>The actions of the so-called &#8220;Popular Nationalist Insurgency Command of the Brazilian Integralist Family&#8221; were condemned by other integralist groups. Eduardo Fauzi, one of the suspects to have planned and carried out the attack, has fled to Russia and is reportedly seeking political asylum.</p> <h2>The extreme-right emerges</h2> <p>The Christmas Eve attack comes as the most dramatic example of an escalation of extreme-right speech and demonstrations in Brazil in recent months. In mid-December, special government advisor Filipe Martins replied to a tweet from President Jair Bolsonaro&#8217;s son Carlos, who had wished him a happy birthday. Calling him his &#8220;brother,&#8221; Mr. Martins <a href="https://twitter.com/filgmartin/status/1204933554104393728">wrote</a> of his desire to &#8220;let the scum keep biting themselves with rage,&#8221; and signing off by saying, in Spanish, &#8220;<em>ya hemos pasao!&#8221;</em></p> <p>Meaning &#8220;we have already passed,&#8221; the phrase was declared by Spain&#8217;s fascistized dictator General Fernando Franco after he took Madrid in 1936. Since then, it has been used as a rallying cry by Francoists in Spain and abroad.&nbsp;</p> <p>In November, researchers found at least <a href="https://brazilian.report/society/2019/11/23/currency-exchange-neo-nazis-football-numbers/">334 active neo-Nazi groups in Brazil</a>, largely encountered in the South of the country. Among them were Hitlerist cells, Holocaust deniers and three self-proclaimed branches of the <a href="https://www.nsctotal.com.br/colunistas/dagmara-spautz/ku-klux-klan-em-sc-e-racismo-e-deve-ser-tratado-como-tal">Ku Klux Klan</a>.</p> <p>Back in August, newspaper <em>Folha de S. Paulo</em> published an insider story on a <a href="https://www1.folha.uol.com.br/poder/2019/08/grupos-de-mensagens-negam-holocausto-louvam-de-hitler-a-eneas-e-propagam-nazismo.shtml">series of fascist and neo-Nazi groups</a> on WhatsApp Messenger in Brazil, to which reporter Fábio Zanini gained access to and monitored over the span of two weeks. &#8220;There was a bit of everything [in the WhatsApp groups],&#8221; Mr. Zanini told <strong>The Brazilian Report</strong>, at the end of last year. &#8220;There were salutes to Hitler, to Mussolini, to [Portuguese dictator] Salazar, to Franco, videos of Holocaust deniers…&#8221;</p> <h2>The history of Brazilian Integralism</h2> <p>Founded in 1932 with the publication of Plínio Salgado&#8217;s &#8220;October Manifesto,&#8221; Brazilian Integralism was based on a similar movement in Portugal decades before, defending a fully integrated social order following the pillars of nationalism, conservatism, and fundamental Christianity.</p> <p>The movement was the closest Brazil ever came to developing its own brand of fascism, basing much of its symbology on notorious fascist regimes in Europe, with Nazi-esque salutes and logos, and ideas echoing classical Italian fascism.</p> <figure class="wp-block-image"><img src="https://brazilian.report/wp-content/uploads/2020/01/fascism-brazil.jpeg" alt="fascism brazil" class="wp-image-29900" srcset="https://brazilian.report/wp-content/uploads/2020/01/fascism-brazil.jpeg 739w, https://brazilian.report/wp-content/uploads/2020/01/fascism-brazil-300x168.jpeg 300w, https://brazilian.report/wp-content/uploads/2020/01/fascism-brazil-610x343.jpeg 610w" sizes="(max-width: 739px) 100vw, 739px" /><figcaption>Integralists in 1937. Photo: WikiCommons</figcaption></figure> <p>The ideology took root with the creation of the Brazilian Integralist Party (AIB), which briefly fell into the good graces of President Getúlio Vargas, whose nationalist and conservative discourse married well with the Integralists. The AIB supported Vargas&#8217; 1937 coup, but they were quickly kicked into touch as the president-turned-dictator extinguished all political parties and centralized power for himself.</p> <p>World War II saw the Brazilian Integralists and their fascistic tendencies lose credibility with the widespread vilification of the Axis powers, and their numbers gradually dwindled until the death of Plínio Salgado in 1975.</p> <p>&#8220;I wouldn&#8217;t say integralism is more &#8216;acceptable&#8217; in Brazil, but it&#8217;s not demonized,&#8221; explained Mr. Zanini. &#8220;The march [on November 9] was more ridiculed than it was combatted. Such an event with a neo-Nazi group, for example, would have been impossible. People would be arrested.&#8221;</p> <h2>Is Brazil on an extreme-right path?</h2> <p>In an op-ed published in <a href="https://oglobo.globo.com/brasil/artigo-com-religiao-nao-se-brinca-1-24164123">newspaper <em>O Globo</em></a> in the week following the Christmas Eve attack, one of Porta dos Fundos&#8217; leading personalities, comedian Fábio Porchat, addressed the troupe&#8217;s right to satirize religion and insinuated that <a href="https://brazilian.report/opinion/2018/09/29/jair-bolsonaro-fascist/">the election of Jair Bolsonaro may be indirectly responsible</a> for the petrol-bombing of the producer&#8217;s Rio headquarters.</p> <p>&#8220;Porta dos Fundos released Christmas specials in 2013, 14, 15, 16, 17, 18 and there was no direct violent reaction. Why is it that in 2019, some people felt empowered to throw Molotov cocktails at our door? What changed this year especially so that people would have this audacity at this exact moment? I have a hunch. What about you?&#8221;</p> <p>Elsewhere, pundits criticized the silence of both Jair Bolsonaro and Justice Minister Sergio Moro over the attack, suggesting that it came across as an &#8220;<a href="https://noticias.uol.com.br/colunas/leonardo-sakamoto/2019/12/27/silencio-de-bolsonaro-e-moro-soa-como-endosso-a-ataque-ao-porta-dos-fundos.htm">endorsement</a>&#8221; of the act of terrorism.</p> <p>Regarding the increased visibility of extreme right-wing groups, Fábio Zanini appears to agree that the current moment in Brazil favors such factions. &#8220;These ideologies can be found all over the world, but they are more accepted now [in Brazil]. There is a mood in the country that is suited to right-wing nationalism, and this encourages fringe groups.&#8221;

How would Brazil act if a U.S.-Iran conflict breaks out?

The Brazilian President and the dictatorship

Is Jair Bolsonaro a fascist?