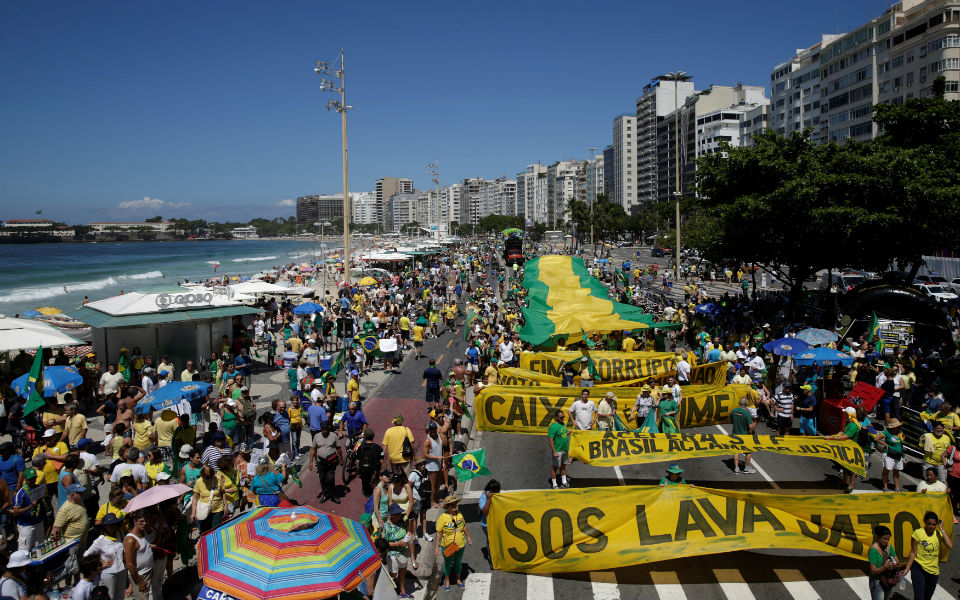 Among the recurring criticisms of Operation Car Wash—Brazil’s sweeping corruption investigation which for the last five years has caused untold damage to the country’s state-owned companies and construction firms—is that it has never gone after banks, despite the massive amounts of money laundering involved in many of Car Wash’s criminal cases.

However, it appears that this

may have changed, with Wednesday&#8217;s news that Car Wash investigations have identified accounts opened in Brazil&#8217;s five biggest banks were used to launder a total of BRL 1.3 billion. Prosecutors are now attempting to determine whether failures in control systems at Itaú, Banco do Brasil, Bradesco, Caixa, and Santander could lead to the criminal liability of these major financial institutions.</p> <p>News of Car Wash&#8217;s offensive against banks saw São Paulo&#8217;s benchmark stock index fall 2.90 percent on Wednesday, with share prices of major financial institutions also taking a dip. Bradesco dropped 3.86 percent, Santander, 3.44%, Banco do Brasil, 3.4%, and Itaú Unibanco, 2.75%.</p> <p>The first time Car Wash pursued any financial institution was in May this year, when our <a href="https://brazilian.report/newsletters/daily-briefing/2019/05/29/may-29-2019-operation-car-wash/">Daily Briefing</a> covered the launch of an investigation into middle-market bank Banco Paulista, indicting three former executives of the institution for money laundering and mismanagement.</p> <p>Today&#8217;s announcement involves corruption on a much larger scale, with prosecutors saying accounts opened by illegal currency exchangers currently under investigation laundered millions in each of the country&#8217;s biggest banks. Of the suspected total of BRL 1.3 billion, BRL 989.6 million is attributed to Bradesco, while around BRL 200 million is reckoned to have been laundered through accounts at Banco do Brasil.</p> <script src="https://www.buzzsprout.com/299876/1078964-53-the-new-face-of-brazil-s-operation-car-wash.js?player=small" type="text/javascript" charset="utf-8"></script> <hr class="wp-block-separator"/> <h2>The open secret</h2> <p>Recent leaks of private messages between Car Wash prosecutors, published by <em>The Intercept</em> in partnership with various other media outlets, show that those responsible for making Car Wash indictments were fully aware of foul play in Brazil&#8217;s banks.</p> <p>In a conversation dated October 16, 2018, prosecutor Roberson Pozzobon states in one Telegram group that banks &#8220;made looooooads of profit from the billionaire transactions&#8221; of convicted lobbyist Adir Assad. The group was aware that Mr. Assad had opened a Bradesco account in the Bahamas, and that the bank&#8217;s compliance officer issued a notice about problems with the account in question. &#8220;And what did Bradesco do?&#8221; asked Mr. Pozzobon. &#8220;Nothing!&#8221;</p> <p>From the outset, Operation Car Wash has given preferential treatment to financial institutions, as became clear by <em>The Intercept</em>&#8216;s leaks. Exchanges of messages showed that prosecutors preferred to seek deals with banks in order to receive compensation for money laundering, as opposed to moving against them and holding them criminally liable.</p> <h2>Systemic risk</h2> <p>The fear of pursuing financial institutions was the so-called &#8220;systemic risk,&#8221; by which harming banks could have a ripple effect on the economy as a whole.</p> <p>Interestingly, this was never a concern Car Wash prosecutors showed for Brazil&#8217;s construction sector, with their corruption investigations dismantling what is one of the most crucial and labor-intensive industries in the country.&nbsp;</p> <p>Though showing some signs of a comeback, <a href="https://brazilian.report/money/2019/08/29/brazilian-economy-escapes-recession-just-about/">rising 2 percent</a> between the second quarters of 2019 and 2018 for the first time in five years, the sector is still severely hobbled. Meanwhile, unemployment still sits high at 11.8 percent, with 12.6 million out of work around Brazil.</p> <p>Prosecutors mentioned the &#8220;systemic risk&#8221; of investigating Brazil&#8217;s banks in one Telegram chat from October 2018, in which prosecutor Januário Paludo suggested that Car Wash &#8220;could break the financial system.&#8221; He said the operation should take &#8220;ostensive&#8221; measures against smaller banks &#8220;to see how the market will react.&#8221; This could explain why Banco Paulista was the first financial institution to be targeted by Operation Car Wash.</p> <p>Despite a <a href="https://br.reuters.com/article/businessNews/idBRKCN1SY18Y-OBRBS">small decrease</a> in 2018, Brazil&#8217;s banking sector remains one of the most concentrated in the world. The country&#8217;s top five banks, all mentioned by Car Wash as being used for money laundering, make up a total of 81.2 percent of the market in Brazil.</p> <h2>Conflict of interest?</h2> <p>While refusing to launch legal proceedings against financial institutions, lead Car Wash prosecutor Deltan Dallagnol was actually profiting off of them.</p> <p>Around the time of the Telegram conversations highlighting the &#8220;systemic risk&#8221; of prosecuting banks, Mr. Dallagnol gave a paid lecture to the Brazilian Banking Federation (Febraban) on the prevention of money laundering.</p> <p>The chief prosecutor was involved in other such speaking arrangements for top executives of Brazil&#8217;s biggest banks. In another exchange of messages, in the week of his lecture to Febraban, Mr. Dallagnol wrote that he was &#8220;concerned about [Car Wash&#8217;s] steps in regard to the banks,&#8221; fearing that they would move against the operation via laws or regulations. &#8220;They are very powerful,&#8221; he said.

Banks in the crosshairs of Operation Car Wash

The end of Operation Car Wash as we know it