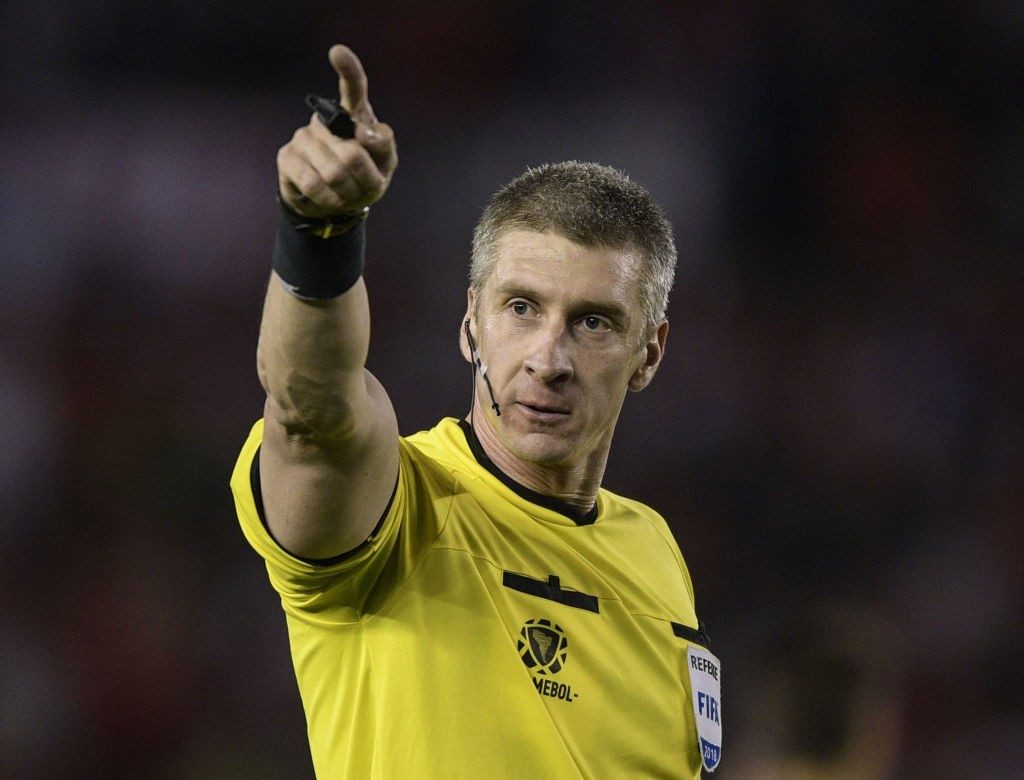 Good morning and welcome back to the Brazil Sports newsletter. This week, we’re looking at the Brazilian league’s new plan to curb homophobia in stadiums, the Brazilian women’s team’s new (Swedish!) coach, and a profile of Tyneside’s new favorite striker: Joelinton. Happy reading!

Homophobia has long plagued Brazilian football. Whenever there is an opposing player that one set of fans dislikes, the uninventive go-to insult is simply to chant that the player is a “viado,” a faggot. When singing about rival teams, once again, homophobic insults are the first port of call.

It doesn’t stop with the fans either. In Brazil’s traditional animal lottery jogo do bicho—an illegal draw held in neighborhoods across the country where each number is represented by a different animal—number 24 represents the deer, or “veado,” which is used as a homophobic slur. Until this day, it is incredibly rare to see any Brazilian footballer wearing the number 24 shirt.

More recently, the Brazilian Football Confederation (CBF) was fined by FIFA for five instances of homophobic chanting throughout the qualifying campaign for the 2018 World Cup. At goal kicks, fans would shout, in unison, homophobic slurs at the opposition goalkeeper. The same behavior was seen at Brazil’s opening match of the 2019 Copa América, but went unpunished.

In 2019, Brazilian football is finally taking a stand against homophobia in stadiums. On the back of the Supreme Court determination that discrimination related to sexual orientation or gender identity is now a crime in Brazil as a whole, the Superior Sports Justice Court (STJD) has followed suit, establishing specific punishments for homophobic behavior on behalf of players, clubs, and fans.

Now, teams may be punished with points deductions if they are reported to the STJD for homophobic chanting. If the violation occurs during a cup match, the team in question could face elimination from the tournament. Is it going to make any difference? It’s too early to say. However, the rule is by far and away the most Brazil has done to fight homophobia in stadiums.

This weekend, during the league match between Vasco and São Paulo, referee Anderson Daronco paused proceedings and walked over to the home side’s coach, Vanderlei Luxemburgo, to tell him that the game would not continue until Vasco fans stopped homophobic chanting. The coach turned to the fans, gestured for them to stop, which they eventually did, and the game continued.

Daronco included the homophobic chants on his match report, and the STJD will analyze the case, meaning Vasco could be docked three points. Baby steps? Sure. But in all my years of covering Brazilian football, I’ve never seen a match be stopped due to homophobic chanting. Once the first team is penalized by losing three points, then we’ll see how serious these rule changes are.

When it comes to the men’s national football team, those in charge of the sport in Brazil are adamant that the Seleção will never have a foreign-born coach. This is less out of any sporting tradition of national teams being managed by national managers, and more out of a dismissive superiority, believing—against all evidence seen in Europe’s biggest leagues—that Brazilian coaches are just as good as anything you can find abroad.

When it comes to the women’s national team, however, the CBF doesn’t seem to have the same hang-up, as it has chosen Swedish coach Pia Sundhage as its new permanent manager.

Foreign coaches in the domestic leagues have often had a hard time of things. They are judged to a much higher standard than Brazilian coaches, and the fascination with their different personalities and methodologies often causes the sports press to follow them around incessantly, which is less than ideal. Whereas boards of Brazilian clubs are trigger-happy with their coaches at the best of times, it often seems a foreign manager simply needs to sneeze at the wrong time in order to lose his job.

This, however, is unlikely to happen to Pia Sundhage. For better or for worse, the coach of the Brazilian women’s national team rarely ever comes under the microscope. In fact, the vast majority of Brazilian football fans would be unable to tell you, at any given time, who the manager of the women’s team is. Therefore, being able to fly under the radar somewhat, Pia Sundhage should have the opportunity to focus on her work and try to build something with the national team.

So, who is she? Aged 59, Sundhage made her name as the coach of the U.S. women’s national team back in 2008. She took the Americans to two Olympic gold medals, as well as a World Cup final in 2011. She then took over her native Sweden, where she remained in charge for five years.

Openly gay, Sundhage has been an important voice in the acceptance of LGBT footballers and coaches in the women’s game. She positions herself as ideologically left-wing, which is a rarity in the reactionary environment of Brazilian football. Whether this will have any bearing on her success as a manager remains to be seen.

Sundhage makes her debut this week, facing Argentina, Chile, and Costa Rica in a friendly tournament, kicking off against Argentina on Thursday evening.

Who? Also going by the name Joe Linton, Big Joe or Joel In Toon, Joelinton is Newcastle United’s Brazilian number 9, who scored his first goal for the club this weekend, in a surprising 1-0 away win over Tottenham. (Oh, and it’s pronounced Jo-EL-in-ton. More Joe Wellington than Joe Linton.)

History. Joelinton began his career playing for Sport Recife, one of the biggest sides in the Northeast of Brazil. Despite playing a little less than 12 months of first-team football in his home country, he made an immediate impact in Recife, becoming a crucial part of the side at the tail end of the 2014 season.

Germany. Following in the footsteps of compatriots Roberto Firmino and Luiz Gustavo, a teenage Joelinton left the Northeast to sign for Bundesliga side 1899 Hoffenheim. He struggled at first, spending two seasons on loan at Rapid Vienna, but he led the line for the German side in the 2018-19 season, scoring 11 in 33 appearances.

Breaking records. Newcastle United liked what they’d seen of Joelinton in Germany, enough to break the club’s all-time transfer record and bring him to England for GBP 40 million. The Magpies were famously the first English side ever to sign a Brazilian player, when they brought Mirandinha over from Palmeiras in the late 1980s.

Any good? After a solid performance on Sunday, Newcastle United fans are beginning to see what Joelinton is capable of. There’s something special about him: he’s big and lanky, but neither stiff nor slow. He seems to glide around the pitch and his apparently telescopic legs are able to reach any loose balls spilling around the penalty area. At the same time, he’s good at the basics. Leading the line, he’s durable and does well with his back to goal.

National team? As is the case with all Brazilians who make their names abroad, Joelinton hasn’t been on the radar for the national team. That could be about to change, however, if his form continues in England. Brazil’s front line is very strong indeed, but being a skillful, mobile, yet somewhat traditional number 9, Joelinton would offer them something they haven’t had in a while.

Série A. We have a new leader in the Brazilian championship, as Flamengo’s comprehensive 3-0 win away to Ceará saw them leapfrog Santos, who were held to a thrilling 3-3 draw against Fortaleza. Bahia jumped up to 8th position with a 1-0 away win against Atlético-MG. Roger Machado’s side are now six games unbeaten.

Copa Libertadores. Flamengo and Palmeiras shot way out in front in the two all-Brazilian quarter-finals of the Copa Libertadores. Brazilian champions Palmeiras grabbed a crucial 1-0 away win against Grêmio thanks to a stonking strike from Gustavo Scarpa, while Flamengo did their part at home, dispatching Internacional by two goals to nil. The winners of the ties will face off in the semis, and at this point, it looks like Flamengo v. Palmeiras.

Olympic preparation. 25-year-old Isaquias Queiroz blitzed past his competition to win the C-1 1000m gold medal at the Canoe Sprint World Championships in Hungary. Isaquias is a previous world champion in the C-1 500m and C-2 1000m events, but had yet to reach the top in the C-1 1000m category. In 2016, he became the first Brazilian athlete to win three medals at one edition of the Olympic Games.

Amazon fires. With the wave of forest fires sweeping Brazil’s Amazon region, a Série C match had to be stopped on Sunday in the northern state of Acre, due to a cloud of smoke from a nearby blaze engulfing the stadium. Players of Atlético Acreano and Luverdense had to use their shirts as makeshift gas masks and visibility on the pitch was near impossible.

Puskas Award. Fifa announced the shortlist for the best goal of the 2018-2019 season, the so-called “Puskas Award.” One Brazilian player made the final ten: RB Leipzig’s Matheus Cunha, for his gorgeous finish against Bayer Leverkusen in April. Stealing in before the last defender and taking it round him with a Marseille roulette, Matheus topped off the move with a chip that can only be described as insolent.

Bruno Henrique. After Flamengo’s midweek win over Internacional, Fifa heaped praise on forward Bruno Henrique, pointing out that the player reached a top speed of 38 km/h at one moment in the match, making him, technically, the fastest player in the world.

Goal of the Week. We were all set to choose Gustavo Scarpa’s thumping strike against Grêmio in midweek as our Goal of the Week … but Giorgian de Arrascaeta had other ideas. In Flamengo’s 3-0 win over Ceará on Sunday night, the Uruguayan playmaker positioned himself to receive a cross from the right wing and—forget it, just watch.