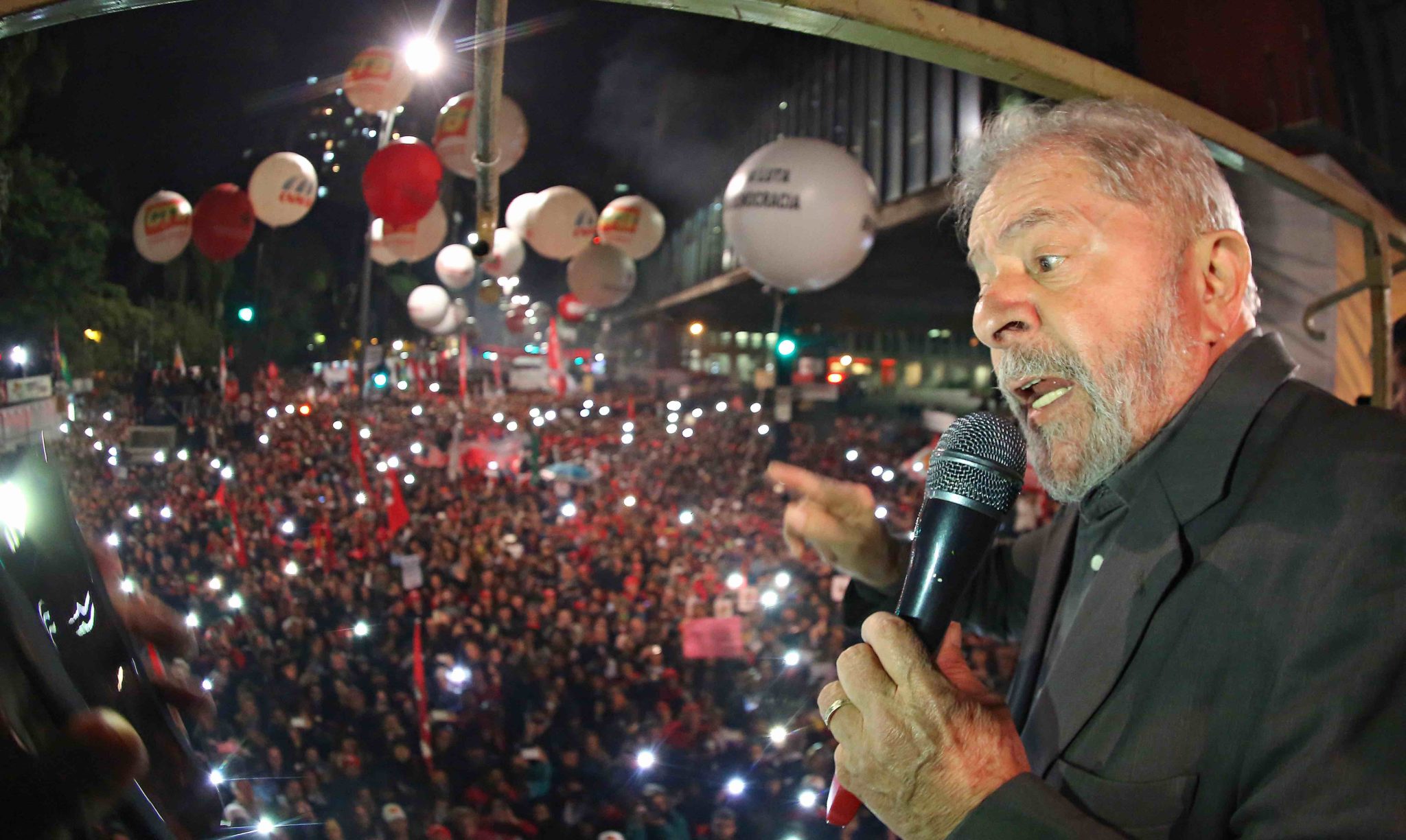 Lula during a political act in São Paulo. Photo: R.Stuckert/IL

Lula during a political act in São Paulo. Photo: R.Stuckert/IL

It is safe to say that Luiz Inácio Lula da Silva is the most improbable president in Brazilian history. The boy who escaped with his family from the desert-like Brazilian sertão to shine shoes in the streets epitomizes the tale of the self-made man. From the streets, he made it to the floor of a screw factory, where he began his career as a politician. First, it was as a union leader, then, as the founder of a left-wing party supported by intellectuals, and finally, as the president.

In his early years in office, Lula faced a two-year-long economic paralysis that threatened to take down his administration. He dodged many corruption scandals, managing to emerge as a man who knew nothing and was betrayed by crooked allies. He beat the scandals, earned the trust of the top 1 percent, and made it to the end of his 8-year tenure with Brazil’s GDP growing at 7 percent. When he left office, he had an 80-percent approval rate. Meanwhile, he lost two wives (one during childbirth in 1971, and one to cancer just a year ago).

Lula’s life is a story made for cinema. And tomorrow, that narrative might include one of its darkest chapters yet: the confirmation of a conviction for corruption and money laundering. The case will have a major impact on the 2018 election – since it could bar Lula from the ballot – and on Brazil’s efforts against corruption.

We at The Brazilian Report are breaking down Lula’s trial for you.

At 8:30 am on January 24, three judges at the Federal Appellate Court of the 4th region (TRF4) will analyze Lula’s appeal of his first conviction. You can watch live by clicking here.

In July 2017, Lula was convicted of corruption and money laundering, and sentenced to nearly 10 years in prison. He was found guilty of receiving 3.7 million BRL in bribes from the OAS construction company.

In a 238-page opinion, Federal Judge Sérgio Moro (responsible for the first verdict) claimed that the bribes were paid in the form of a beachfront triplex apartment in Guarujá, São Paulo. According to the prosecution, Lula and his late wife hid their ownership of the flat, which remained registered as a property of OAS – and was even used by the company as collateral of a loan.

Text messages from OAS executives, spreadsheets, and other documents were used to substantiate the accusation that the firm reformed and maintained the apartment in exchange for illegal advantages with the federal government.

What does the prosecution say?

The case’s lead prosecutor, Mauricio Gotardo Gerum, has chosen not to comment on the case publicly – with the exception of one statement, in which he says he will not ask for Lula’s immediate arrest. A recent Supreme Court ruling allows judges to arrest defendants after a second conviction, but only after all appeals in that court have been exhausted.

Some of the evidence produced by Gerum during the investigation provide clues as to what we can expect of him. For example: the prosecution wants Lula’s sentence (9 years and 6 months) to be increased. They believe that the crime of corruption occurred three times – and Lula should be sentenced for each of these crimes, rather than as a “package.”

Gerum has stated that Lula’s influence over Petrobras, Brazil’s giant state-owned oil and gas company, is flagrant. He has also rebuffed Lula’s claims that the trial is merely a political lynching, an attempt to prevent him from claiming a third presidential term.

What does the defense say?

Lawyer Cristiano Zanin Martins told The Brazilian Report and members of the foreign press that the process is marked by “serious violations of the defendant’s rights.” The defense team claims that Lula wasn’t given the benefit of the doubt, and that the sentence is not based on actual evidence.

Meanwhile, the former president’s representatives claim that the prosecution has failed to prove a direct relation between Lula and any act benefiting OAS. Furthermore, the acts attributed to him occurred after 2010, when he left office – and Brazilian law states that corruption crimes require one party to be in the public administration.

Aside from attacking the matter of the case, defense lawyers also claim that Federal Judge Sérgio Moro, responsible for the first conviction, shouldn’t have tried the case in the first place. Trials in Brazil happen in the city where the crime was committed – with some exceptions. All Operation Car Wash-related crimes are centralized with Moro, who claimed that that was Lula’s case. But during his decision, Moro himself said that the bribes didn’t necessarily come from Petrobras. “If the case doesn’t involve Petrobras, then Moro has no business judging it,” said Martins during a conference call.

What are the implications of Lula’s trial?

Lula is the frontrunner for the 2018 election. Nine months prior to Election Day, he is set to win in any scenario with a good margin. Should Lula be convicted, he could be barred from running for president again because of something called the Clean Sheet Law, which prevents candidates with convictions at multiple court levels from running for office.

“This law appeared as a way to moralize Brazilian politics. But now it has been called into question – and not only because of Lula’s popularity,” says Michael Mohallem, a political scientist at think tank FGV. “The fact that we don’t have the proverbial ‘smoking gun’ leads many to question the legitimacy of the process altogether.”

But not all will be lost for the former president if the probable conviction is confirmed. He will still have a series of appeals before facing exclusion from the presidential race.

Is Operation Car Wash directed at Lula and the left?

Indeed, Lula’s case doesn’t feature the same level of evidence as those of some of his political adversaries. Last year, for example, President Michel Temer was caught on tape negotiating the payment of hush money to a corrupt former speaker of the House. Still, he managed to avoid two indictment requests.

“The investigators have not made many mistakes during the almost four years since the operation was launched. However, most of the critical mistakes have occurred with the cases of Lula and his allies,” comments Mohallem.

Besides, as The Brazilian Report columnist Claudio Couto points out, Lula’s process was carried out at a faster pace than others of a similar nature.

The Federal Appellate Court accepted the charges against the former president after just 42 days (the average time is 96 days). The case’s rapporteur analyzed all the evidence and wrote his opinion on the case in only 100 days – nearly three times faster than his normal average of 275. The appeal trial has been scheduled for January 24, which is just 54 days after the rapporteur completed his judicial opinion, and roughly half of the average time (102 days).

It would be unfair to call Operation Car Wash a deliberate attempt to hurt Lula and his Workers’ Party.  However, as political scientist Celso Rocha de Barros wrote, names belonging to the right wing, like Senator Aécio Neves and former Speaker Eduardo Cunha, were only hit hard by investigations after they lost political relevance.

This assessment is by no means a way of saying that we blindly believe in Lula’s innocence. He might even deserve to be sent to jail once his appeals are exhausted. He just shouldn’t be the only one.

Lula: Conviction was not about the apartment