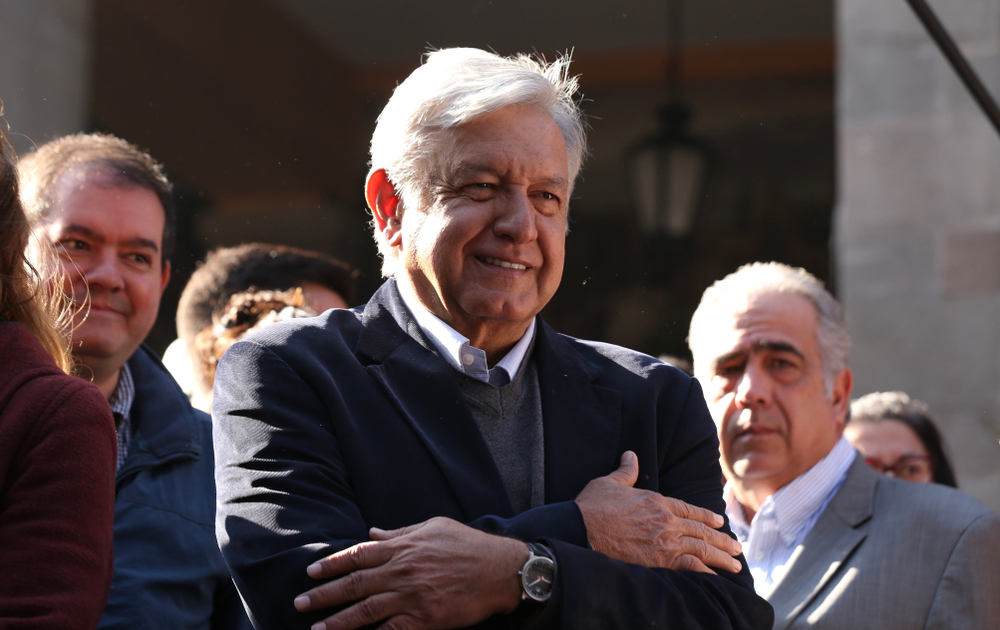 AMLO's signature gesture shows him hugging the Mexican people. “You have to hug. Nothing happens.” Photo: Octavio Hoyos/Shutterstock

Mr. Bremmer is probably right. Mr. Bolsonaro over the last few days has actively dismissed the dangers of the Covid-19 outbreak, endorsed anti-democrat street protests against lawmakers and Supreme Court justices (greeting and touching supporters––directly exposing as many as 300 to the virus––despite 22 members of his entourage on a recent trip to the U.S. testing positive for the virus), and has undermined the actions of his Health Ministry—donating protection masks and respirators to Italy while local hospitals report a lack of equipment. And according to a report, he even “didn’t read or ignored” a January intelligence memo alerting him to the potential risks of a pandemic.

However, the Brazilian leader perhaps has a rival for this vaunted title: left-wing Mexican President Andrés Manuel López Obrador, also known as AMLO.

</p> <p>Despite many differences of beliefs and policy proposals, AMLO and Mr. Bolsonaro have demonstrated striking similarities in their responses to the coronavirus. As <em>The Economist</em> <a href="https://www.economist.com/the-americas/2019/12/05/the-surprising-similarities-between-amlo-and-jair-bolsonaro">described once</a>, &#8220;both are nationalists with little interest in the outside world and would rather the outside world reciprocated.&#8221;&nbsp;</p> <p>And now, they both are risking tens of thousands of lives as they roll the dice through their&nbsp;hands-off approach to the coronavirus crisis.&nbsp;</p> <p>Mr. Bolsonaro has called &#8220;lunatics&#8221; the governors who put their states in quarantine and said that a &#8220;little flu&#8221; couldn&#8217;t bring the country&#8217;s economies to a halt. Meanwhile, AMLO told Mexicans to continue hugging, as &#8220;nothing is going to happen.&#8221; In one of the country&#8217;s poorest regions, he said: “Pandemics and other unfortunate events won’t do anything to us.” He allowed some <a href="https://radioformulaqr.com/noticias/salud/pese-a-pandemia-por-coronavirus-40-mil-personas-asistieron-al-vive-latino/">40,000 people to gather</a> for the Vive Latino music festival in Mexico City on Sunday. </p> <p>While there is certainly a major moral and political difference in trying to mobilize supporters against the country’s democratic institutions and allowing a packed musical festival to take place, both responses are reckless.</p> <p>To further complicate matters both presidents are part of high-risk groups. They are over 60 and have a complicated <a href="https://www.youtube.com/watch?v=g9Bl0rofmEQ">medical history</a>. AMLO suffered a stroke seven years ago; Jair Bolsonaro has already undergone four complex surgeries since being <a href="https://brazilian.report/power/2018/09/06/bolsonaro-stabbed-rally/">stabbed in the campaign trail</a> back in 2018—and had pneumonia a year ago. He has said early in March that a fifth operation might be necessary.</p> <figure class="wp-block-image"><img src="https://brazilian.report/wp-content/uploads/2020/03/49673964151_b5b876383e_k-1024x683.jpg" alt="Jair Bolsonaro gets hand sanitizer from Health Minister Mandetta. Photo: Carolina Antunes/PR" class="wp-image-33941" srcset="https://brazilian.report/wp-content/uploads/2020/03/49673964151_b5b876383e_k-1024x683.jpg 1024w, https://brazilian.report/wp-content/uploads/2020/03/49673964151_b5b876383e_k-300x200.jpg 300w, https://brazilian.report/wp-content/uploads/2020/03/49673964151_b5b876383e_k-768x512.jpg 768w, https://brazilian.report/wp-content/uploads/2020/03/49673964151_b5b876383e_k-610x407.jpg 610w" sizes="(max-width: 1024px) 100vw, 1024px" /><figcaption>Jair Bolsonaro gets some hand sanitizer from Health Minister Mandetta. Photo: Carolina Antunes/PR</figcaption></figure> <h2>The grave consequences of leaders&#8217; negligence</h2> <p>On February 28, AMLO declared that&nbsp; his country was “ready to face coronavirus.” But it clearly wasn&#8217;t. Cases in <a href="https://www.nytimes.com/2020/03/23/opinion/mexico-coronavirus-amlo.html">Mexico</a> have jumped from 12 to nearly 370 in a matter of ten days. Just over the past 24 hours, there were 16 new cases and two more deaths (to a total of four at the moment).</p> <p>But during a recent press conference, the leftist leader donned Christian garments as a toll to protect people from the coronavirus. No mention whatsoever to washing one&#8217;s hands, social distancing, staying at home or any scientific advice whatsoever.&nbsp;</p> <p>Just like Jair Bolsonaro, AMLO has so far resisted containment measures—as of writing he still has not closed borders or restricted air travel, claiming that the Mexican Peso&#8217;s recent rout (and restrictions on border crossing from the U.S.) have already made the country&#8217;s economy suffer enough. Activity is Mexico was stagnating <em>before</em> the outbreak, and AMLO&#8217;s administration believes that &#8220;overreacting&#8221; would just make things worse. His popularity has also been sharply declining from highs over 80 percent to 57 percent, following the widespread perception that he has not been able to come to grips with the violence scouring the country.</p> <p>Mexico knows how much a health crisis can clobber a country&#8217;s economy. In 2009, it was a swine flu hub. The government at the time acted swiftly, restricting public life in densely packed areas—which estimates say <a href="https://www.reuters.com/article/us-health-coronavirus-mexico/mexico-former-swine-flu-hub-tests-nerves-with-coronavirus-strategy-idUSKBN214476">cut down a percentage point</a> from Mexico&#8217;s GDP, still ailing from the previous year&#8217;s financial crisis. In 2009, the economy shrank by over 5 percent.</p> <div class="flourish-embed flourish-chart" data-src="visualisation/1667068"><script src="https://public.flourish.studio/resources/embed.js"></script></div> <p>AMLO&#8217;s and Jair Bolsonaro&#8217;s nonchalance might haunt them as the virus approaches poor, densely-populated areas. In slums, social distancing is nearly impossible—and Covid-19 could spread like wildfire, taking a vast human toll.</p> <p>Despite their ideological views, these two Latin American leaders rely on a personalistic style of politics as a way to hold their grip on the political system. They also came to power in the wake of corruption scandals and a sharp rise in violent crime that discredited the political establishment. But all estimates point to a long, hard recession ahead. Coupled with a major health crisis, it is the perfect recipe for social unrest.&nbsp;</p> <p>The irony is that both AMLO’s hugs and hands-on style of populism and Bolsonaro’s bullets and threats both expose their supporters to the dangers of the pandemic.&nbsp;

Beware of the viral president!