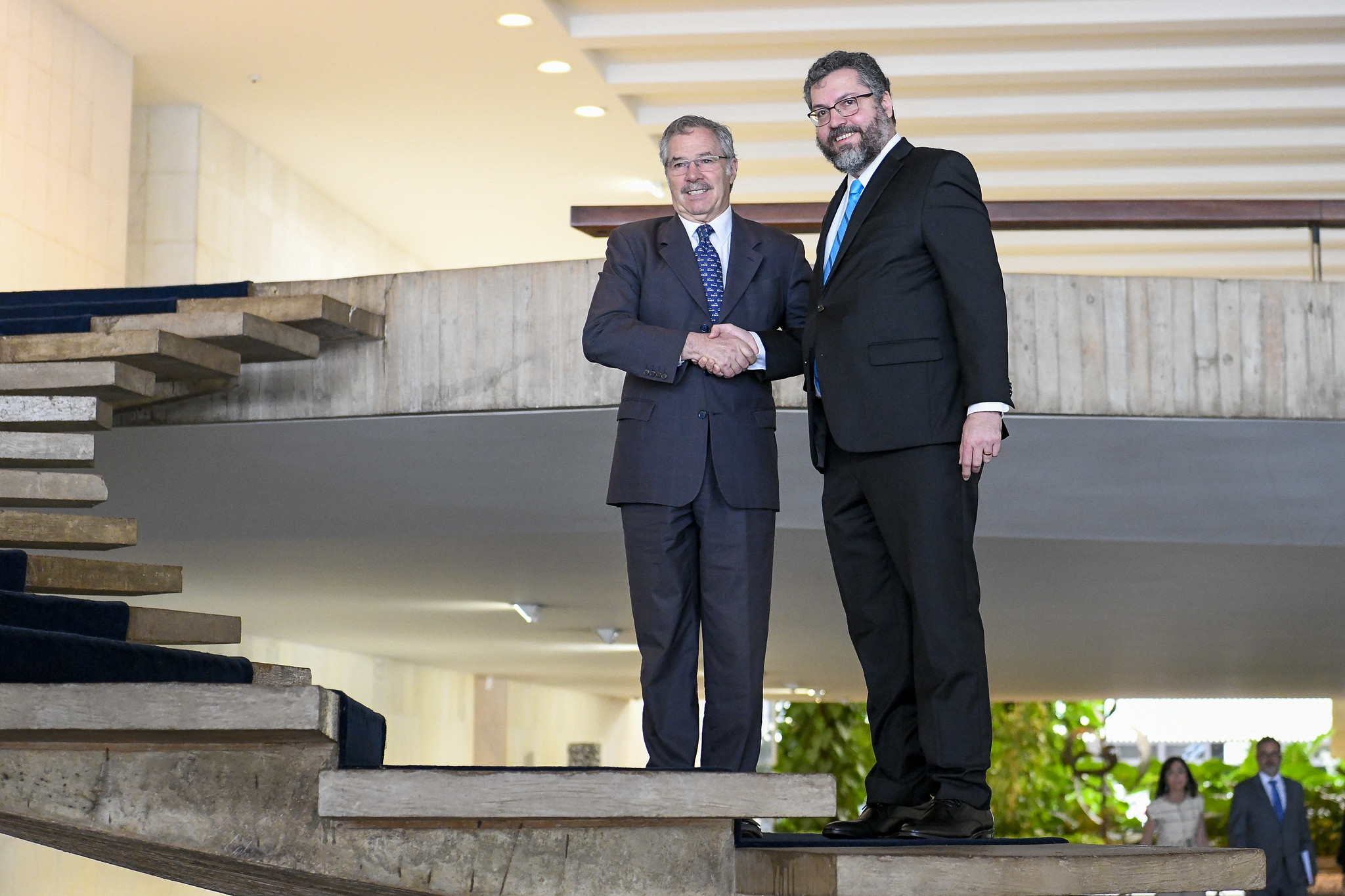 Amid an ideological scuffle between both countries’ presidents, the Jair Bolsonaro government sat down with Argentinian foreign minister Felipe Solá today. Four months after the election of Alberto Fernández as President of Argentina, this was the first official attempt of either administration to calm tensions and have a pragmatic discussion about the future of trade in South America and Argentina’s path to economic recovery.

With Argentina’s licking its wounds after entering an economic emergency and desperately trying to renegotiate the terms of its massive International Monetary Fund (IMF) loan, Mr. Fernández’s administration sees this meeting as a way to get back into its neighbor’s good books.

</p> <p>During the meeting, Mr. Solá said that though Argentina understands Mercosur needs free trade deals with other countries, such as Israel, Lebanon, and Central American nations, they have to “maintain an open mind so that they don&#8217;t become an obstacle.&#8221;</p> <p>Defending a pragmatic and realistic stance, the minister asked &#8220;our Brazilian brothers [to help] in whatever way they can&#8221; with the deal with the IMF. With U.S President Donald Trump having promised such support to Mr. Fernández, the good relations between Mr. Bolsonaro and Washington could be an extra push.</p> <div id="buzzsprout-player-1079105"></div> <script src="https://www.buzzsprout.com/299876/1079105-12-brazil-and-mercosur.js?container_id=buzzsprout-player-1079105&#038;player=small" type="text/javascript" charset="utf-8"></script> <hr class="wp-block-separator"/> <h2>One chance at a first impression</h2> <p>Before being elected in October 2019, leftist Alberto Fernández was already seen in a bad light by Brazil&#8217;s far-right President Jair Bolsonaro. After visiting former President Luiz Inácio Lula da Silva in jail and campaigning for the release of Mr. Bolsonaro&#8217;s political nemesis—which eventually came to pass on November 8—Brazil&#8217;s government had already singled out the then-candidate as a potential enemy.</p> <p>Not even after going on to call Mr. Bolsonaro “racist, misogynistic and violent” worsened the relationship between the leaders of Brazil and Argentina. Jair Bolsonaro was an open supporter of neoliberal Mauricio Macri&#8217;s re-election, and the victory of a Peronist candidate came as a blow for his diplomatic ties close to home.</p> <p>As the months passed, however, the prospects of Brazil–Argentina relations improved—largely out of necessity, as the USD 20 billion in trade between the two countries began to speak louder than ideological differences. Brazil&#8217;s Vice-President Hamilton Mourão visited Buenos Aires, and Mr. Bolsonaro invited his Argentine counterpart to a meeting.&nbsp;</p> <h2>A chance for Brazil and Argentina to start over</h2> <p>According to Francisco Americo Cassano, an international commerce professor at Mackenzie Presbyterian University, there are two things at stake for Felipe Solá&#8217;s visit to Brasilia. Firstly, Argentina is desperate to pull itself out of crisis, and there is the matter of the Mercosur–EU trade deal, about which both sides are keen to discuss terms.</p> <p>“The meeting in Brasília is more of a necessity for Argentina than Brazil,&#8221; he explains. &#8220;It is obvious that the Argentinian market is an important destination for Brazil, mainly for durable consumer goods such as cars and household appliances. On the other hand, Argentina needs to be side by side with Brazil while eyeing up local exporters,” he adds.&nbsp;</p> <div class="flourish-embed" data-src="visualisation/1071758"><script src="https://public.flourish.studio/resources/embed.js"></script></div> <p>In 2019, as it changed president, Argentina’s inflation reached 53.8 percent—the highest since 1991 and one of the highest in the world—according to the Argentinian National Institute of Statistics and Census (Indec). Meanwhile, in addition to Brazil&#8217;s drop in productivity, the Economy Ministry pointed out that <a href="https://brasil.elpais.com/brasil/2019/09/02/economia/1567453864_099749.html">Brazilian exports to Argentina</a> fell their lowest point in over a decade.</p> <p>“Furthermore, we have an important political component, which are the extended agreements that Mercosur has already initiated with the European Union and that can be expanded to Canada, South Korea, and Singapore,&#8221; says Mr. Cassano. &#8220;It will come at a very good time indeed, but first, as the biggest countries of the bloc, Brasília and Buenos Aires have to define their priorities: Mercosur in the long term, or their immediate bilateral agreements in the short term.&#8221;</p> <h2>Postponing the Mercosur-EU deal? </h2> <p>According to Felipe Solá, the priority of the meeting in Brasília is to build “rapprochement with the Brazilian government,” with the objective of clearing the road for the flow of trade.</p> <p>Though we won&#8217;t be seeing a Bolsonaro-Fernández handshake just yet, the meeting could be decisive for the future, especially considering the <a href="https://brazilian.report/latin-america/2020/02/05/argentina-plan-climb-out-debt-sinkhole-imf/">economic chaos in Argentina</a>—where the country awaits another round of negotiations on its billionaire loan from the IMF—and the international mistrust of Mr. Bolsonaro’s policies on the environment.&nbsp;</p> <div id="buzzsprout-player-1363123"></div> <script src="https://www.buzzsprout.com/299876/1363123-67-the-mercosur-eu-trade-deal-explained.js?container_id=buzzsprout-player-1363123&#038;player=small" type="text/javascript" charset="utf-8"></script> <hr class="wp-block-separator"/> <p>That said, postponing a definition on the agreement with the European Union could instead allow both countries to work on their joint agenda. This was the view shared by Mr. Solá during his time with Mercosur lawmakers on Monday, a day before the meeting in Brasília with his counterpart.</p> <p>Mr. Solá criticized the fact that the Mercosur-European Union agreement “is placed in the middle of the discussion between Argentina and Brazil,” thus avoiding dealing with the agreement urgently.&nbsp;</p> <p>The free trade agreement was finally signed in June 2019 after 20 years of negotiations between the South Americans and Europe. The bill, currently under the process of legal review, still needs to be ratified by the parliaments of each country. In December, Argentina suggested a review of the agreement, considering that it could affect its fragile industry during an economic crisis.

The future of Brazil-Argentina relations

What would a “Brazil First” policy mean for Argentina?