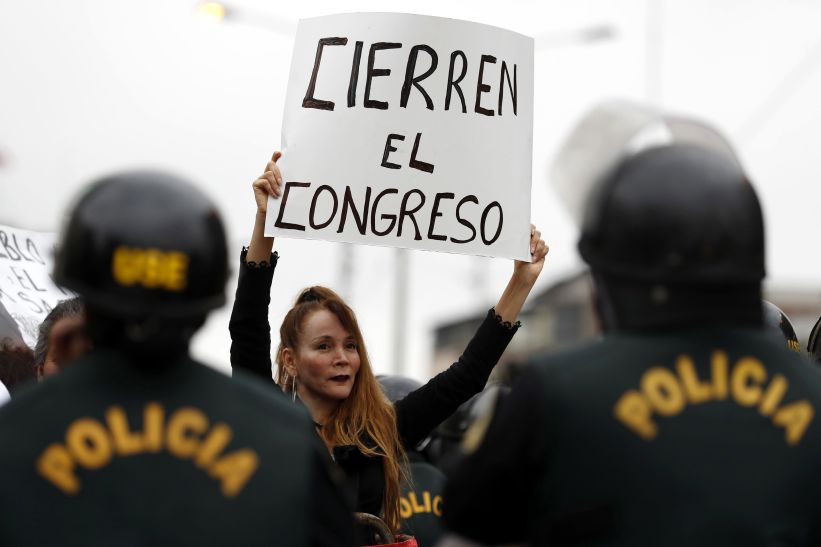 Peruvian citizens protest asking for the shutdown of Congress, in support of President Martín Vizcarra

Just four years ago, the Odebrecht construction group was an international behemoth, with a presence in 28 countries, principally in Latin America. The company founded in 1944 was the first Brazilian firm to lead a publicly-financed infrastructure project in the U.S., building Miami’s Metromover. It employed 168,000 people and, in 2014, boasted a turnover of USD 28.5 billion. As it turned out, much of that success was conquered thanks to hefty bribes to hundreds of public officials in several countries.

In Brazil, Operation Car Wash pulled the thread of Odebrecht’s corruption network—discovering that the group even had its own bribery department. The scandal led to the ruin of dozens

of politicians, as well as financial struggles. Banned from public works, Odebrecht fell into disgrace, reducing its staff by 80 percent, and <a href="https://brazilian.report/money/2019/06/18/odebrecht-recovery-debts/">entering court-supervised administration</a>, one step before bankruptcy.</p> <p>The effects of the Odebrecht scandal, however, spilled over into <a href="https://brazilian.report/power/2018/04/13/operation-car-wash-latin-america/">several countries</a>. Once the biggest construction firm in Latin America, Odebrecht admitted to bribing politicians in at least 11 countries. None of them, however, seem to have been hit as hard as Peru.</p> <p>Peru’s Southern Interoceanic Highway is one of the boldest—and most expensive—engineering projects in the country. With 2,600 kilometers (further than the distance between Boston and Miami), it connects the Peruvian coast to the Brazilian border, across the Andes. The road cost over USD 3 billion and was meant to be a symbol of South American integration. Instead, it has become synonymous with corruption.</p> <script src="https://www.buzzsprout.com/299876/1803928-80-odebrecht-s-peruvian-wrecking-ball.js?player=small" type="text/javascript" charset="utf-8"></script> <hr class="wp-block-separator"/> <p>In order to win the contract, Odebrecht paid roughly USD 20 million in bribes to former Peruvian president Alejandro Toledo (2001-2006). Besides Mr. Toledo, scandals involving Odebrecht have led to the downfall of his successors. &#8220;Alan García was under investigation (and <a href="https://www.bbc.com/portuguese/internacional-47968498">committed suicide in April 2019</a> to avoid an arrest), <a href="https://brazilian.report/power/2019/09/25/new-car-wash-testimony-involves-three-south-american-leaders/">Olanta Humala</a> was arrested in 2017, and Pedro Pablo Kuczynski resigned last year to avoid impeachment procedures,&#8221; says Alonso Gurmendi, a law professor at Lima’s Universidad del Pacifico.</p> <p>Now, incumbent President Martín Vizcarra is the latest Peruvian leader to be hit by the Odebrecht scandal—although in a completely different way than his predecessor.</p> <h2>Vizcarra v. Congress</h2> <p>On the evening of September 30, Mr. Vizcarra dissolved Congress and called for new parliamentary elections, after saying that lawmakers had constantly blocked his attempts to pass anti-corruption legislation. “This exceptional measure will finally allow our citizens to give their opinion and decide at the ballot box … the future of our country,” the president said in a televised address.</p> <figure class="wp-block-image"><img src="https://brazilian.report/wp-content/uploads/2019/10/ggg-11-1024x683.jpg" alt="peru president martin vizcarra" class="wp-image-25239" srcset="https://brazilian.report/wp-content/uploads/2019/10/ggg-11-1024x683.jpg 1024w, https://brazilian.report/wp-content/uploads/2019/10/ggg-11-300x200.jpg 300w, https://brazilian.report/wp-content/uploads/2019/10/ggg-11-768x512.jpg 768w, https://brazilian.report/wp-content/uploads/2019/10/ggg-11-610x407.jpg 610w" sizes="(max-width: 1024px) 100vw, 1024px" /><figcaption>President Vizcarra addresses the nation. Photo: Juan Pablo Azabache Manayay</figcaption></figure> <p>Hours after the parliament dissolution, however, the opposition struck back. Congress called the president&#8217;s move an &#8220;illegal&#8221; coup, declared the presidency vacant, and swore in his vice president, Mercedes Aráoz.&nbsp;</p> <p>As things stand, Peru has two presidents and no parliament—in a manner of speaking.</p> <p>Mr. Vizcarra was suspended for &#8220;immorality,&#8221; which, however, has no specific legal definition. And while Congress temporarily empowered Ms. Aráoz, neither the president nor the Armed Forces recognize her legitimacy. Meanwhile, protests in support of Mr. Vizcarra occurred in several cities.</p> <p>It remains unclear what will unfold.&nbsp;</p> <h2>Good economy despite bad politics</h2> <p>Despite dragging the names of four recent presidents through the mud, the Operation Car Wash scandal has not brought to the Peruvian economy the same devastating effects it did in Brazil. For this year, the International Monetary Fund projects a 3.9-percent GDP growth for Peru—way better than the paltry 0.8 percent the fund forecasts for Brazil.</p> <div class="flourish-embed" data-src="visualisation/728670"></div><script src="https://public.flourish.studio/resources/embed.js"></script> <hr class="wp-block-separator"/> <p>Last year, Peru celebrated 20 years of growth and stability—while Brazil, which is by far Latin America&#8217;s biggest economy, faced its worst recession on record just a couple of years ago (and undergoes the slowest recovery process in the country&#8217;s economic history).&nbsp;</p> <p>According to experts, one of the main reasons for the growth trajectory—despite the political turmoil—is the fact that the last presidents, from Alejandro Toledo to Martín Vizcarra, have sustained the same economic pillars: free-market rules, predictable regulatory frameworks for foreign investors, and a mix of controlled public spending and low inflation rates.</p> <p>With 32 million people and a GDP of USD 211 billion, Peru has also diversified its export basket. Besides mining products, the country began exporting gold (thanks to many Chinese conglomerates), and expanded its agribusiness output—becoming one of the world&#8217;s leading producers of avocados, asparagus, and grapes.</p> <p>That is not to say that Operation Car Wash-related scandals haven&#8217;t taken their toll. &#8220;If it weren&#8217;t for Car Wash, we would be growing at a 6-percent rate, not 4 percent,&#8221; Carlos Aquino, an economist at Lima&#8217;s San Marcos University, told the <a href="https://www.bbc.com/portuguese/internacional"><em>BBC</em></a>.</p> <p>The Odebrecht group has admitted to paying a total of USD 29 million in kickbacks to Peruvian officials between 2005 and 2014. In February 2019, the company signed a plea bargain deal with the Peruvian branch of the Car Wash probes, committing itself to supply prosecutors with information on corruption schemes and paying fines of USD 230 million.&nbsp;

The end of the Odebrecht era