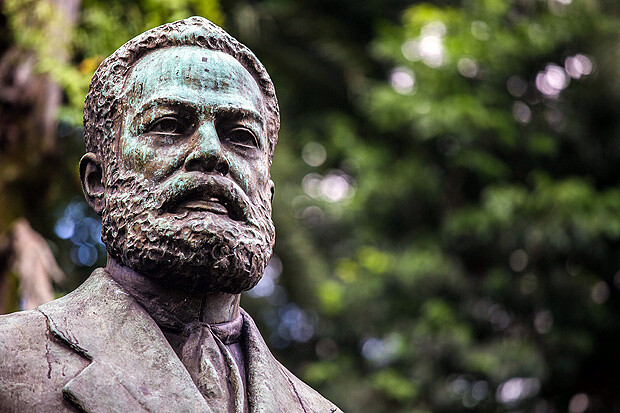 On November 20, Brazil celebrates Black Consciousness Day—observed as a public holiday in over 800 cities. The date pays homage to Zumbi dos Palmares, a symbol in the struggle for freedom and empowerment of Afro-Brazilian people. But in this article, we will tell the story of one unsung hero in the struggle for racial equality in Brazil: Luiz Gama. In 2013, international audiences were moved by the biographical drama “12 Years a Slave,” recounting the life of Solomon Northup, a freeborn African-American man who was kidnapped and sold into slavery in 1841, and his journey to regain freedom. The story of Luiz Gama, born in Salvador in 1830, however, is arguably even more spectacular.

</p> <p>He was the son of Luíza Mahin, a former slave credited with mentoring several slave insurgencies, and a ruined Portuguese bourgeois. His mother&#8217;s role in a secessionist movement to separate Bahia from the rest of the country in 1837 forced her to flee Salvador—leaving the young Luiz with his father.</p> <p>If in &#8220;12 Years a Slave&#8221; Mr. Northup was sold as a slave by two conmen, Luiz Gama was sold to a slave trafficker by his own father—who desperately needed money to pay for his gambling addiction.</p> <p>At that time, slaves from Bahia were considered to be &#8220;damaged goods,&#8221; due to the numerous uprisings from their enslaved populations. Many slave owners feared that their &#8220;revolutionary spirit&#8221; would &#8220;contaminate&#8221; their other servants. Receiving no bids, Mr. Gama grew into his teens as the property of the trafficker who bought him from his father, and ended working in a São Paulo inn.</p> <p>He would learn how to read and write with a guest, and, aged 17, he managed to prove in a court of law that he was born a free man—and therefore couldn&#8217;t be enslaved. He tried to join the prestigious law school at the University of São Paulo—but was rejected because of the color of his skin. Still, Mr. Gama would frequent the school&#8217;s library, becoming a self-taught <em>&#8220;rábula</em>,<em>&#8220;</em> that is, a lawyer without a bar certification—which, at that time, was not required to practice law.</p> <h2>The lawyer of the slaves</h2> <p>His stellar legal career was marked by his unyielding defense of the rights of slaves. Using the legal system, <a href="http://agenciabrasil.ebc.com.br/geral/noticia/2015-10/abolicionista-negro-que-libertou-mais-de-500-escravos-sera-reconhecido-pela">Mr. Gama freed over 500 slaves</a>, with some estimates having the count at close to 1,000. Published in 1938 by the sociologist and journalist Sud Menucci, one of his most detailed biographies describes Mr. Gama&#8217;s work as a meticulous quest for technicalities that he could use in courts to break his clients&#8217; bonds of slavery.</p> <p>This work was usually <em>pro bono</em>, as he explained in an 1869 interview to the now-defunct newspaper <em>Correio Paulistano.</em> &#8220;I advocate for free out of sincere dedication to the cause of the disgraced. I&#8217;m not in this for profit. Nor do I fear retaliation,&#8221; he said.</p> <p>He gained notoriety for defending a belief—at the time considered radical—that a slave who kills their master is, in fact, acting in self-defense.</p> <p>When he died, in 1882, six years before <a href="https://brazilian.report/guide-to-brazil/2017/10/15/slavery-brazil/">slavery was abolished in Brazil</a>, an estimated <a href="http://www.institutoluizgama.org.br/l/index.php/luiz-gama">3,000 people attended his funeral</a> at a time when São Paulo was a city of just 40,000 people. It would take 133 years for him to be posthumously recognized as a lawyer by the Brazilian Bar Association, and only last year was Mr. Gama&#8217;s name included in Brazil&#8217;s &#8220;Book of National Heroes.&#8221;</p> <p>For former Justice Minister Miguel Reale Jr., Mr. Gama was &#8220;the most important Afro-Brazilian man of the 19th century,&#8221; and that his legal pieces can be read &#8220;to build courage in the fight against all the injustices that still plague us.&#8221;

Abolition in Brazil: 131 years on, still no cause for celebration

For Brazil’s historic slave communities, the future is uncertain

The Neymar case: the story so far