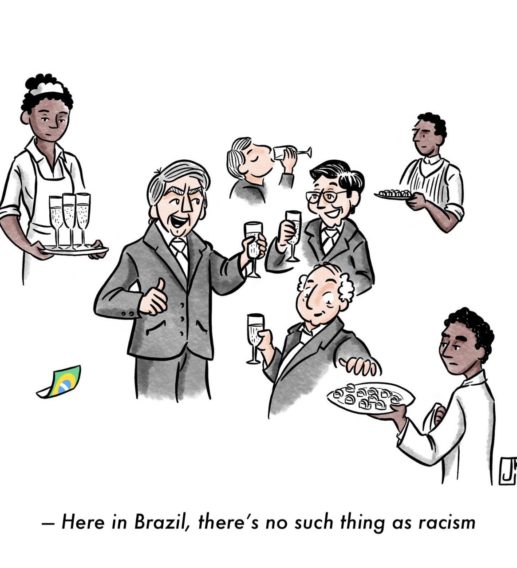 Brazil needs to talk about racism, as the President thinks it doesn’t exist.

“It’s a black person thing,” said William Waack, one of Brazil’s most prominent journalists at leading news network Globo, on a hot mic as cars honked in the background. It didn’t take long for Brazilians to start venting their anger on Twitter, using the hashtag #ÉCoisadePreto (It’s A Black Thing) to denounce Mr. Waack and celebrate black Brazilian accomplishments. Making racist comments

Start your 7-day free trial
Login
Subscribe
is a crime in Brazil, but Mr. Waack might also be demonstrative of a phenomenon revealed by recent research: while 97 percent of Brazilians believe that their country is racist, few recognize their own prejudices.

Also, according to a study by the organization Safernet Brasil, in 2017 there were 63,698 reported cases of hate speech on the internet in Brazil, and one-third of them comprised racist hate speech against black people. In a recent study, 81 percent of victims of racist discourse on Facebook in Brazil were middle-class black women aged 20-35.

According to newspaper Folha de S. Paulo, Brazilian research on racial inequality and racism has increased in the last two decades, from only five articles published in 1999 to 147 in 2018.

Bolsonaro’s “new era” is as new as the medieval age: a risk to Afro-Brazilian religions

A far-right government doesn’t include racial equality on its agenda. Brazil is no exception.