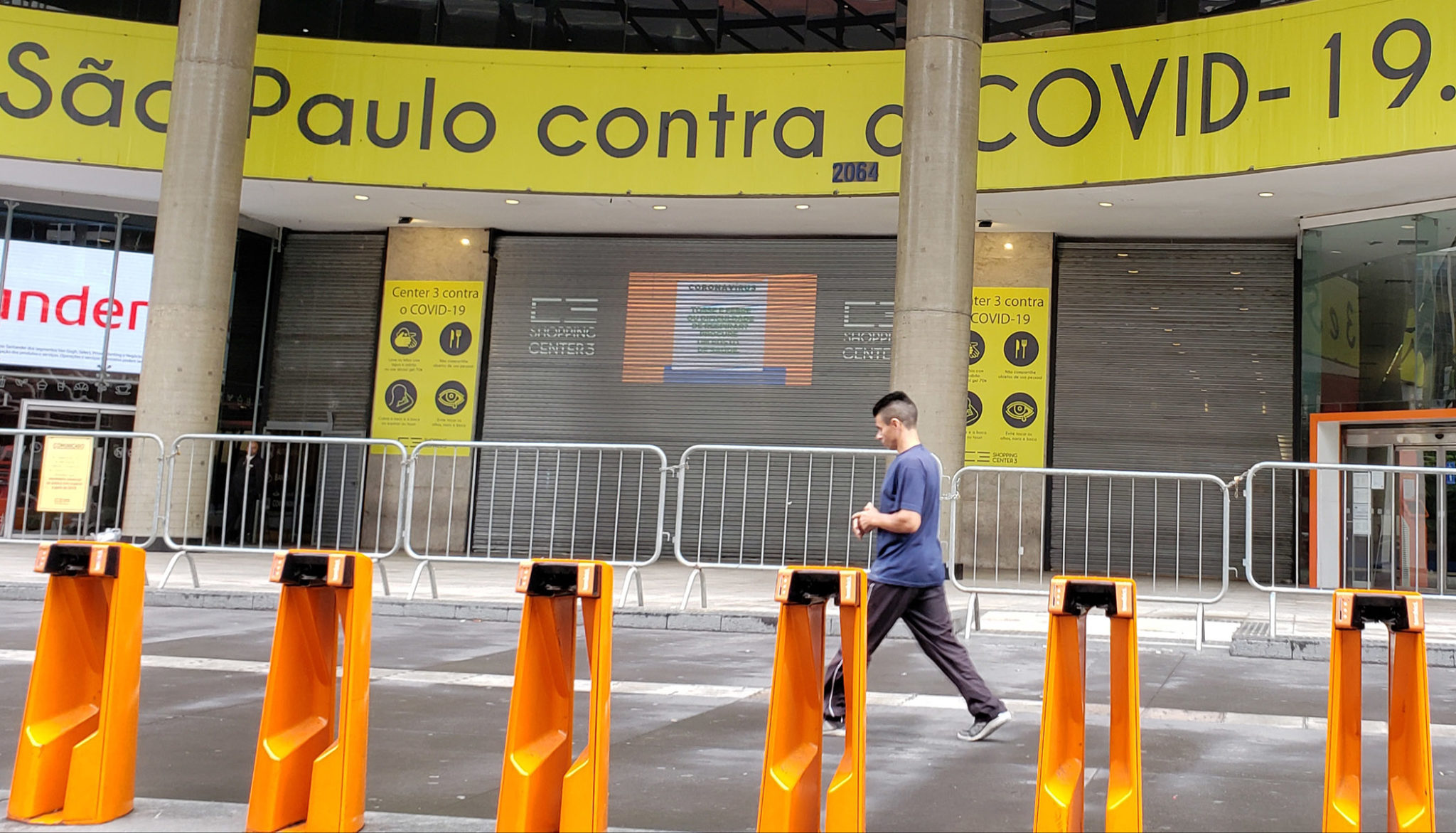 It took a while before Covid-19 became the topic of discussion in Brazil. The pandemic only really resonated with Brazilians after reports of authorities who had traveled with President Jair Bolsonaro to the U.S. two weeks ago testing positive for the novel coronavirus. So far, 22 members of the president’s entourage have confirmed infections.

Slowly, Brazilian companies began adapting to a reality in which social distancing is a must—sending their employees home to work remotely. In major urban centers, authorities began imposing restrictions on non-necessary commerce and shopping malls.

But according to a poll released by Datafolha on Sunday, professionals who can allow themselves to work at home—or afford to stop working altogether—remain a very homogeneous demographic: they are young, better-educated … and rich.

businesses that remain open, the World Health Organization recommends strict hygiene control, with the constant cleaning and sanitization of surfaces, and instructing employees to carry out strict hand-washing routines.</p> <p>However, even in companies where protective measures are being taken, workers still fear for their health. Often it is unavoidable for them to avoid closed spaces, with little fresh air, where it is difficult for them to keep their distance from colleagues.</p> <p>“In the building I work in, we had suspected cases of coronavirus,&#8221; explains Pedro, who works in a bank in São Paulo, which will remain open for the time being. &#8220;The management&#8217;s decision was to divide the team, half stayed in the building and the other half moved to another office. We still don&#8217;t have the structure to work remotely, and they are having a hard time making it work. For now, everyone’s taking the subway, the bus and sitting in the office without a safe distance.”</p> <p>“I think the worst part is that [management] thinks that creating smaller groups and offering hand sanitizer will solve the problem, even when most need to commute by bus and subway,” he adds.</p> <div class="flourish-embed flourish-chart" data-src="visualisation/1630385"><script src="https://public.flourish.studio/resources/embed.js"></script></div> <h2>Public transport amid the coronavirus spread</h2> <p>While <a href="https://brazilian.report/coronavirus-brazil-live-blog/2020/03/21/sao-paulo-state-to-go-in-quarantine-for-15-days-covid-19/">São Paulo has ordered the shutdown of commerce</a> and agglomeration, authorities still hesitate to pull the plug on public transportation networks. On a normal day, the São Paulo subway system hosts 15.3 million passengers, according to its last survey. With schools closed and many going on home-office mode, the number of passengers is down 45 percent, according to the state administration.</p> <p>Still, trains are crowded during rush hour, with users taking to <a href="https://twitter.com/davidmirandario/status/1239944844258226176">social media</a> to complain about the lack of measures to ensure social isolation. Left-wing Congressman David Miranda published on March 17: &#8220;São Paulo&#8217;s Sé metro station, between 5 and 7 pm. Does someone believe the virus will be contained while workers continue to be exposed this way?&#8221;</p> <figure class="wp-block-embed-twitter wp-block-embed is-type-rich is-provider-twitter"><div class="wp-block-embed__wrapper"> <blockquote class="twitter-tweet" data-width="550" data-dnt="true"><p lang="pt" dir="ltr">Metrô na Estação da Sé, São Paulo, entre 17 e 19h.<br><br>Alguém acredita que o vírus será contido enquanto trabalhadores estiverem expostos desta maneira? <a href="https://t.co/onjb4W1STz">pic.twitter.com/onjb4W1STz</a></p>&mdash; David Miranda (@davidmirandario) <a href="https://twitter.com/davidmirandario/status/1239944844258226176?ref_src=twsrc%5Etfw">March 17, 2020</a></blockquote><script async src="https://platform.twitter.com/widgets.js" charset="utf-8"></script> </div></figure> <p>In urban centers where non-necessary businesses haven&#8217;t yet been forced to close, some companies are sending their employees home voluntarily—but this is not a rule.</p> <p>Solange says her situation is peculiar. &#8220;I should be working, but I stopped going. I&#8217;m a subcontractor for the Supreme Court, and they haven&#8217;t allowed us to work remotely yet.&#8221; She also notes that on Monday, there was a meeting at her workplace involving <a href="https://brazilian.report/coronavirus-brazil-live-blog/2020/03/20/brazilian-senate-approves-state-of-calamity-against-covid-19/">Senate President Davi Alcolumbre</a>, House Speaker Rodrigo Maia, Health Minister Luiz Henrique Mandetta, and Supreme Court Chief Justice Dias Toffoli, among others.</p> <p>&#8220;Three hours in a room without ventilation and full of people,&#8221; she said. Mr. Alcolumbre tested positive for coronavirus two days later.</p> <h2>The specter of unemployment</h2> <p>Carlos works in the financial sector of an investment company and says his bosses are employing remote work in &#8220;shifts,&#8221; with workers taking some days in the office, and others at home.</p> <p>The sector, he says, does not allow total remote work, as &#8220;the area has specific compliances.&#8221; But the atmosphere, he says, is one of &#8220;widespread concern and fear, with people not feeling well and extremely worried about losing their jobs.”</p> <p>&#8220;I feel a number being forced to work, that&#8217;s all,&#8221; he says. &#8220;I&#8217;m sad about the lack of humanity on show.&#8221;</p> <p>The fear of layoffs is very real indeed. The expected drop in demand for non-essential products could spark a series of redundancies in these sectors. Some preliminary calculations by Helio Zylberstajn suggest unemployment could rise by 10 percentage points due to the crisis—meaning that one-fifth of Brazilian economically active adults would be out of the workforce.</p> <p>Maria works in the garment sector and she fears that she is about to lose her job. “I&#8217;m one of the first they’ll choose to cut because my position is replaceable,&#8221; she says.</p> <p>Some staff at her office have been allowed to work remotely, but others are unsure whether they will be allowed the option. &#8220;Two or three [employees] don&#8217;t believe in what&#8217;s going on, but most of us are distressed, sanitizing every surface,” she explains.</p> <hr class="wp-block-separator"/> <p><em>All names of interviewees were changed to protect their confidentiality, as were the names of the companies involved.</em>

Brazil throws money at Covid-19, but will the plan work?

Back to work for Brazil’s Congress

Brazilians still out of the formal workforce

Journalist and researcher at the Ph.D. program in Human Rights of University of Deusto, Spain.