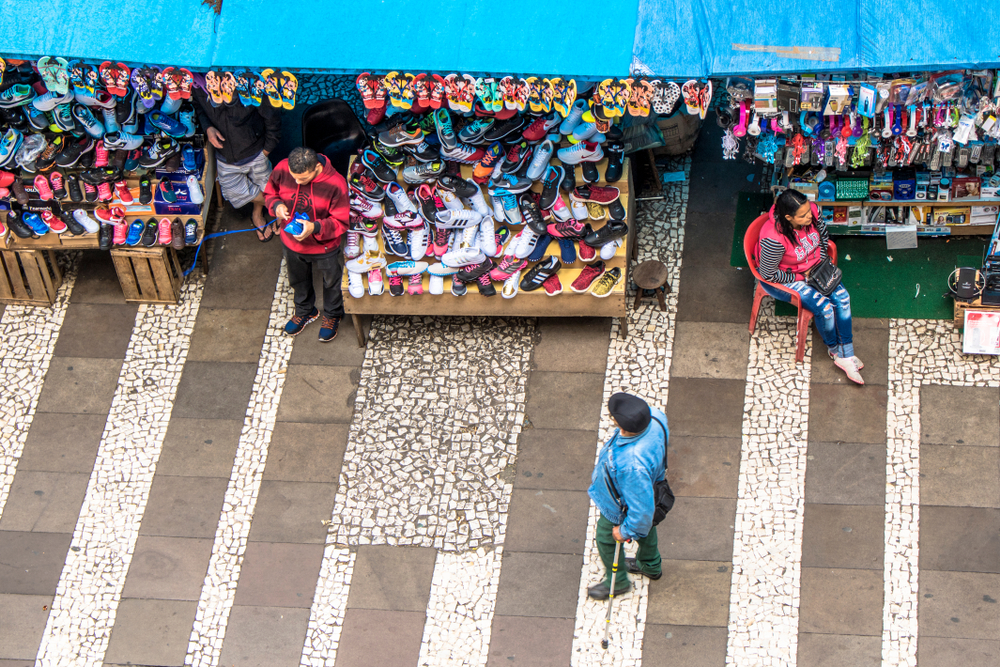 After years of crisis, economists finally seem to be getting more optimistic about the future of the Brazilian economy.

In recent weeks, Brazil’s 5-year Credit Default Swaps (CDS)—commonly called the country’s “risk level”—has gone down to its lowest level since 2013, before the country fell into what was to be its worst recession on record. This “score” reflects an overall perception that the Brazilian economy is set to get better.

</p> <p>And all of this despite the recent political turbulence involving President Jair Bolsonaro and his sons. In the perception of financial pundits, the head of state&#8217;s outrageous statements will not rock the agenda of reforms. There is reason to believe this is true. Last week, Congressman Eduardo Bolsonaro argued that his father should bring back decrees created by the dictatorship to persecute their political opponents—including the infamous AI-5, an institutional order giving the president the power to shut down Congress, impeach opponents at will, and eliminate political rights.</p> <p>House Speaker Rodrigo Maia released a statement condemning the words of the young Bolsonaro, as did other prominent public figures, but that was it. So far, the political establishment has avoided a full-scale confrontation with the president, focusing instead of passing the agenda of Economy Minister Paulo Guedes.</p> <p>The pension reform, the core of Mr. Guedes&#8217; agenda, passed late in October after seven months trundling through Congress. Now, the government&#8217;s economic tsar plans to continue to reform the Brazilian state—slashing perks enjoyed by civil servants, <a href="https://brazilian.report/power/2019/10/24/inefficient-costly-brazil-public-service-need-reform-bureaucracy/">restructuring public service</a> as a whole, and making changes to the so-called &#8220;federative pact&#8221;—that is, how responsibilities and tax revenue are split up between administrations at the federal, state, and municipal level.</p> <blockquote class="wp-block-quote"><p><em>Our perspective is a positive one. In truth, we have yet to see any real improvements. There is a greater demand for our stock market, largely because of the stability it has in comparison to our main market peers, such as Argentina and Chile. Regarding the pension reform, the process is still slow. </em></p><p><em>The reform began with [former president] Michel Temer in 2016 and three years later it is being passed with a slightly larger amount [of savings]. The process began in February and we&#8217;re in November without a resolution. The optimism is a lot more about what could be on the horizon and not what we see today. Because there&#8217;s still a lot of idleness. </em></p><p><em>Despite improvements on the Focus Report, we are still under the poor growth we had in recent years, we still haven&#8217;t made it back to pre-crisis levels. We&#8217;re doing a lot better in relative terms than in absolute terms.</em></p><cite>Ilan Arbetman, analyst, Ativa Investimentos</cite></blockquote> <p>The two charts below help us understand the expectations for the Brazilian economy:</p> <h2>Focus Report</h2> <p>Every Monday, the Brazilian Central Bank publishes its so-called Focus Report—a <a href="https://www.bcb.gov.br/publicacoes/focus">survey</a> among top-rated investment firms. Over 100 forecasts are collected online each week. The report brings markets&#8217; expectations on GDP growth, inflation, the benchmark interest rate, among other indicators.</p> <p>The Focus Report can be seen as a thermometer of how markets perceive the Brazilian economy. Between December 2018 and March 2019, the median GDP growth forecast hovered around 2.5 percent. But, as President Bolsonaro failed to build a coalition at the beginning of his administration, these expectations deteriorated, dropping to less than half of the initial predictions for the year.</p> <p>But the last three weeks saw expectations rise again, thanks to the slow-but-steady drop in unemployment rates, the approval of the pension reform, and the upcoming mega oil auction, which could as much as double Brazil&#8217;s oil output in the near future.</p> <div class="flourish-embed" data-src="visualisation/869002"></div><script src="https://public.flourish.studio/resources/embed.js"></script> <hr class="wp-block-separator"/> <h2>5-year CDS</h2> <p>Brazil&#8217;s recession started in Q2 2014—after which its country risk escalated. The peak came in December 2015, when <a href="https://www.reuters.com/article/brazil-corruption-rousseff/brazil-speaker-cunha-opens-impeachment-proceedings-against-president-idUSE6N10I08720151202">Congress began impeachment proceedings</a> against then-President Dilma Rousseff.&nbsp;</p> <p>At that point, Brazil had lost investment-grade status from agencies S&amp;P and Fitch. Two months later, Moody&#8217;s followed suit.</p> <p>But the country risk began going down in 2016 when Ms. Rousseff was removed from office. In 2018, it climbed back up due to the uncertainties of the presidential race, but now it has fallen sharply.</p> <figure class="wp-block-image"><img src="https://brazilian.report/wp-content/uploads/2019/11/brazil-5-years-cds-2-1024x683.jpeg" alt="" class="wp-image-27137" srcset="https://brazilian.report/wp-content/uploads/2019/11/brazil-5-years-cds-2-1024x683.jpeg 1024w, https://brazilian.report/wp-content/uploads/2019/11/brazil-5-years-cds-2-300x200.jpeg 300w, https://brazilian.report/wp-content/uploads/2019/11/brazil-5-years-cds-2-768x512.jpeg 768w, https://brazilian.report/wp-content/uploads/2019/11/brazil-5-years-cds-2-610x407.jpeg 610w, https://brazilian.report/wp-content/uploads/2019/11/brazil-5-years-cds-2.jpeg 1200w" sizes="(max-width: 1024px) 100vw, 1024px" /></figure> <hr class="wp-block-separator"/> <h2>EMBI+</h2> <p>The <a href="http://www.ipeadata.gov.br/ExibeSerie.aspx?serid=40940&amp;module=M">EMBI+</a> (Emerging Markets Bond Index Plus) was created by JP Morgan to assess risk related to a country&#8217;s economy.&nbsp;</p> <p>It compares interests paid by countries&#8217; bonds to U.S. ones—which are considered to be low-risk papers. By making the comparison, JP Morgan measures how much more yield investors want before putting their money in Brazil.</p> <p>Just like Brazil&#8217;s CDS, the country&#8217;s EMBI+ significantly rose after the recession started in 2014, reaching a peak in 2016. While the index didn&#8217;t significantly dropped in 2019, as the CDS did, it got to March 2014 levels.</p> <div class="flourish-embed" data-src="visualisation/869027"></div><script src="https://public.flourish.studio/resources/embed.js"></script> <p>

What the Brazilian economy will look in ten years

Challenges ahead for the Brazilian economy in 2019

If Brazil’s economy is still crawling, why are stocks soaring?

How Brazil’s economy depends on the construction sector