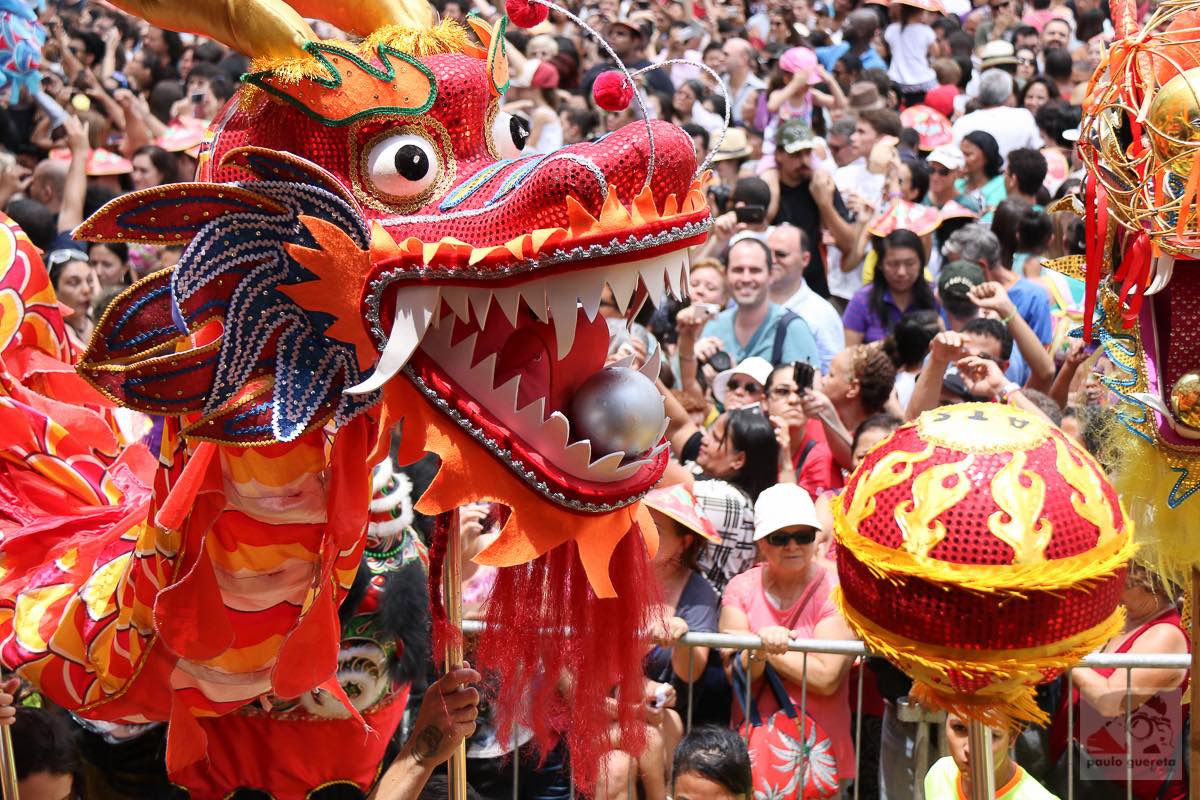 For Brazilians in the 19th century, oriental aesthetics – dragon-emblazoned clothing, porcelain, sun parasols – were signs of refinement and high social standing. Beverage choice, too, was important: before coffee, Brazil had a taste for tea. In 1812, a few hundred Chinese peasants became the first immigrants from their country when they were sent from Macau. Tasked by advisors close to King Dom João VI, their mission was to cultivate tea in Rio de Janeiro’s botanic gardens, with rulers hoping to begin exports to Europe.

The initiative flopped. It was “all but extinguished by the abolition of slavery,” the tea and coffee trade specialist William H. Ukers said in 1935. It was too expensive for European importers, who had ready access to cheap tea from Asia. Instead, it was coffee that kept Brazil’s export-heavy economy afloat, forming important U.S.-Brazil relations. As centuries passed, coffee served to bring the U.S. and Brazil ever closer, with Brazil’s northern cousin exerting increasing influence over the country’s foreign policy.

</p> <p>But in the 21st century, energy and minerals are proving far more definitive for foreign policy than beverage choices – and that’s where China is making its mark in Brazil.</p> <h3>Chinese investments are pouring in faster than ever</h3> <p>China is <a href="http://economia.estadao.com.br/noticias/geral,china-ja-investiu-r-60-bi-na-compra-de-empresas-no-brasil-desde-2015,70001984597">fast becoming</a> one of Brazil’s most significant investors; for every BRL 10 invested in the country between January 2015 and June 2017, BRL 3 came from China. According to data from Transitional Track Record, China poured USD 7.5 billion into Brazil over the course of 2016, while the U.S. invested just USD 4.2 billion. In the first six months of 2017, this continued: China invested another USD 5.6 billion, compared to the U.S.’s USD 3.8 billion. Of those Chinese investments in 2017, 97 percent were concentrated in Brazil’s energy sector.</p> <p>“The Chinese, through giant companies with international experience – like State Grid and China Three Gorges – certainly viewed the opportunity as pragmatic,” Tulio Cariello, an analysis coordinator at the Brazil-China Business Council, told <strong>The Brazilian Report</strong>. “It’s a sector that offers global expansion opportunities for central businesses for China, in a region where its presence is still forming.”</p> <p>Chinese investment patterns in Brazil so far mostly reflect the country’s investment patterns in various African countries. Usually, companies owned by or closely linked to the Chinese state have typically begun with mineral extraction, venturing shortly thereafter into energy production and infrastructure.</p> <p>This year’s largest Chinese investments in Brazil indicate that this pattern is present here too, with China State Grid <a href="http://jcrs.uol.com.br/_conteudo/2017/06/cadernos/empresas_e_negocios/570882-brasil-vira-negocio-da-china.html">acquiring</a> a 45.64 percent stake in Rio Grande do Sul’s state-owned CPFL Energia, and big deals from firms including <a href="https://www.reuters.com/article/us-ctgpc-brazil-dams/chinas-three-gorges-pays-4-8-billion-reais-takes-over-brazil-dams-idUSKCN0ZH5EM">China Three Gorges</a> and <a href="https://www.bnamericas.com/en/news/electricpower/shanghai-electric-secures-brazil-power-projects-worth-us1bn/">Shanghai Electric</a>. There is a slight variation, though: in 2011, one-third of Chinese investments in Brazil went towards infrastructure. This figure dropped to just 2 percent this year, though state-owned China Merchants Port Holding’s <a href="http://www.valor.com.br/empresas/5105698/china-port-paga-r-29-bilhoes-por-90-do-tcp-e-desembarca-no-brasil">recent acquisition of 90 percent</a> of shipping firm Terminal de Contêineres de Paranaguá suggests that the normal pattern may resume.</p> <p><script id="infogram_0_05d6d6e4-7c4a-44ab-bcee-7a9b0bc18adc" title="Chinese investments in Brazil" src="https://e.infogram.com/js/dist/embed.js?2os" type="text/javascript"></script></p> <div style="padding:8px 0;font-family:Arial!important;font-size:13px!important;line-height:15px!important;text-align:center;border-top:1px solid #dadada;margin:0 30px"><a href="https://infogram.com/05d6d6e4-7c4a-44ab-bcee-7a9b0bc18adc" style="color:#989898!important;text-decoration:none!important;" target="_blank" rel="noopener noreferrer">Chinese investments in Brazil</a><br /> <a href="https://infogram.com" style="color:#989898!important;text-decoration:none!important;" target="_blank" rel="nofollow noopener noreferrer">Infogram</a></div> <h3>Debunking the Africa example</h3> <p>Charles Tang, head of the Brazil-China Chamber of Commerce and Industry (CCIBC), believes that the same northern-hemisphere skepticism which <a href="http://www.bbc.com/news/world-asia-18901656">initially</a> viewed China’s actions in Africa as a neo-colonial land grab is certainly present in Brazil.</p> <p>“That vision is exactly what Brazilians are afraid of,” Tang told <strong>The Brazilian Report</strong>. Tang points out that China’s GDP has changed dramatically over the last three decades, due to the foreign investment and expertise empowering the country. “Brazil and every developing country should have a less myopic view of foreign investments,” he added.</p> <p>Research from the Brookings Institute demonstrates that skepticism regarding Chinese investments in Africa is not necessarily warranted. Critics often point to Angola as an example of where Chinese investments are concentrated in resource-rich countries and have directly led to a large increase in external debt relative to GDP.</p> <p>But David Dollar, a senior Chinese economy fellow with the Institute’s John L. Thornton Center, says the data on these investments challenges the myths. Although countries like Angola and Venezuela are having trouble paying off their debts to China, Dollar believes that this is more dependent on poor domestic governance.</p> <p>“It is difficult to implement infrastructure projects in such environments, and the projects tend to have low returns because of the poor investment climate,” he told <strong>The Brazilian Report</strong> by email. “If the domestic institutions are corrupt, then it is unlikely that foreign resources will be put to good use.”</p> <p>Dollar says that South Africa serves as an example of a country countering arguments that Chinese investments constitute a purely <a href="https://brazilian.report/colonial-brazil/">neo-colonialist</a> strategy. China’s first ventures in South Africa began with mineral extraction before expanding to banks and hotels, and lending money to government infrastructure projects. Now, South Africa is a key example of what Chinese interests term <a href="https://www.brookings.edu/wp-content/uploads/2016/07/Chinas-Engagement-with-Africa-David-Dollar-July-2016.pdf">‘win-win’ investment strategies</a>, emphasizing the mutual benefit for those involved and South-South cooperation.</p> <h3>Brazilian governance may be the most significant factor</h3> <p>Brazil’s fate is more likely to resemble that of South Africa than Angola, with Chinese investments spread across diverse industries and attempts to make headway with investments in Brazilian <a href="http://www.valor.com.br/financas/4134556/gigante-chines-icbc-avalia-aquisicoes-no-brasil?utm_source=newsletter_tarde&amp;utm_medium=15072015&amp;utm_term=gigante+chines+icbc+avalia+aquisicoes+no+brasil&amp;utm_campaign=informativo&amp;NewsNid=4134398">banks</a>. But Brazil’s own governance will be crucial. “I am skeptical that any external actor can clean up the system, [which] requires domestic political support and civil society engagement.”</p> <p>The controversial <a href="https://www.theguardian.com/world/2017/oct/05/brazil-amazon-tapajos-hydrovia-scheme">Tapajós dam project</a> in Brazil’s interior, aided by both Chinese and European investment, could foretell the development of the Brazil-China story. In particular, China is interested in developing a waterway to ease cargo transport along the river, making imports and exports of goods like soy – which Brazil produces in bulk and which China consumes in high quantities – cheaper. But efforts to forge ahead with Tapajós ignore indigenous rights and environmental concerns, and could seriously <a href="https://www.socioambiental.org/pt-br/noticias-socioambientais/isa-publica-dossie-belo-monte-nao-ha-condicoes-para-a-licenca-de-operacao">disadvantage nearby cities</a>.</p> <p>Tapajós, then, could serve as an example of Chinese investments affecting Brazilian foreign policy. But this narrative forgets that European countries like France and Italy are also investing in the same project. It also excludes the fact that a large portion of Brazil’s soy goes towards feeding its cattle, pandering to the U.S.’s voracious demands for beef. However, researcher David Dollar believes that Brazil is simply too powerful to be manipulated by potential Chinese efforts to influence foreign policy.</p> <p>“China has used its lending to influence foreign policies,” Dollar said. “In small countries, China potentially has a large amount of leverage.”</p> <p>One example of this is China’s use of investments in Cambodia and Laos to stop the Association of Southeast Asian Nations from taking a stand on China’s territorial advances in the South China Sea. But, Dollar says, “In a big country like Brazil, it seems unlikely that China could exert this kind of influence.”

What does Brazil expect from China?